Six months ago, I wrote that commodity producer BHP Group (NYSE: BHP) “may be the single best bellwether stock for the entire global economy” because “it produces three of the commodities most highly correlated to future inflation (iron ore, copper, and oil).”

Until last week, BHP was up 10% since I made that statement. But BHP tumbled nearly 20% last week after making a big announcement (circled area in the chart below). 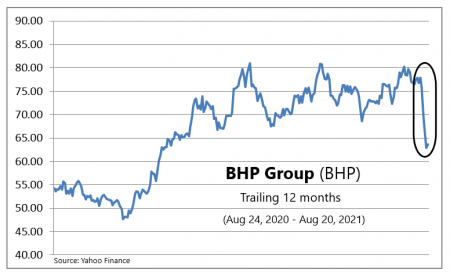 The company announced that it will sell its oil exploration business and invest the proceeds into potash production. Potash is derived primarily from potassium carbonate and is used to make crop fertilizer.

Potash makes crops less vulnerable to droughts. That’s important given the severe water shortage in the western third of the United States.

Although Wall Street doesn’t seem to approve of this exchange, I think it makes sense from a long-term perspective. The oil industry is under attack. The world is going green, and carbon-based fuels are on the way out.

Of course, it will take decades for that transition to occur. According to the International Energy Agency (IEA), world demand for oil will continue to grow over the next five years to more than 104mb/d (million barrels per day) in 2026 from less than 97mb/d this year.

Last year, non-OPEC countries provided roughly two-thirds of the world’s oil supply. Over time, that share is expected to diminish as more energy producers expand their portfolios of renewable energies.

As that happens, OPEC countries will be able to exert increasing influence over the price of oil. That means oil prices will most likely go up in the years to come. By selling its oil business now, BHP will miss out on those gains.

Even if that turns to be the case, BHP is not throwing that money away. Instead, it is investing it in a business that may have even bigger growth prospects than oil.

The world’s population is expanding, as is demand for food. At the same time, global climate change is making it increasingly difficult to grow crops.

According to the World Health Organization (WHO), “The number of people affected by hunger worldwide has been slowly on the rise since 2014.” The report also notes, “The food security and nutritional status of the most vulnerable population groups is likely to deteriorate further due to the socioeconomic impacts of the COVID-19 pandemic.”

BHP is leaving the wrong side of one issue, and getting on the right side of another one. The company’s CEO, Mike Henry, said as much in the press release:

We (will also) create a better ability to allocate capital within BHP towards investments longer term … in future facing commodities and support for more returns to shareholders.

In Henry’s view, the oil business is not a “future facing” commodity given its massive carbon footprint. It has been targeted for extinction by the environmental, social, and governance (ESG) movement.

However, feeding the world’s most vulnerable populations is exactly what ESG proponents would like to see happen. For that reason, there are sources of very cheap capital available to companies with favorable ESG ratings.

At the moment, BHP is not one of them. According to Sustainalytics, BHP is in its “high risk” category due to its heavy exposure to mining and drilling.

By replacing oil with fertilizer, BHP might improve its ESG score. However, I don’t believe BHP is making this swap for that reason.

There is a lot of money to be made in the fertilizer business. If BHP can make this transition efficiently, there is no reason to believe that next year’s financial results will be worse as a result.

Keep in mind, BHP shareholders will retain a 48% interest in Woodside Petroleum, the company that will acquire its oil assets. That means BHP will no longer control its oil production assets but it will still benefit from them.

BHP also announced that it will no longer be a dual-listed company. It will abandon its listing on the London Stock Exchange, leaving the Australia Securities Exchange as its only primary listing.

I don’t see that as a problem, either. The stock’s American Depository Receipts (ADRs) will continue to trade on the New York Stock Exchange. Investors should have no trouble buying the stock.

Given the swiftness and severity of BHP’s share price decline, I think a lot of trading algorithms have been at work. It appears that they don’t know how to value the asset being sold nor the asset being bought.

That confusion is evident in BHP’s forward price-to-earnings ratio (FPER) of less than eight times profits over the next 12 months. That is almost one-third of the 22 multiple for the S&P 500 Index.

I don’t know what it would take for the stock to bounce back. Perhaps when the company releases its next set of quarterly results, analysts on Wall Street will recognize just how cheap the stock has become.

BHP is a member of the Personal Finance Growth Portfolio, and I will leave it there. I believe last week’s big price drop was an aberration that may soon be corrected. If so, then buying it now could result in a quick profit for nimble investors.

But maybe taking a risk on a “turnaround play” doesn’t appeal to you. If you’re looking for other ways to make money, consider the investment strategies of my colleague, Jim Fink.

As chief investment strategist of Velocity Trader, Jim Fink doesn’t trade stocks. He trades velocity. Jim has developed proprietary stock “filters” that provide advanced knowledge of when an equity’s price is about to rapidly accelerate. Based on this knowledge, Jim constructs trades that have consistently reaped windfalls for his followers.

Want to learn about Jim’s next trades? Click here now.