Welcome to my video presentation for Friday, September 3. The article below elaborates on the video’s themes.

As the traditional end of summer lays ahead, the latest economic indicators have been generally positive, driving stocks to new record highs. Despite some noise in the data that reflects the abnormalities of the pandemic, the U.S. jobs market appears to be on the mend.

We did get some disappointing jobs data on Friday. Below, I provide context and explain why the bull case is intact.

The Labor Department reported Thursday that initial filings for unemployment insurance declined last week to the lowest point since the nadir of the pandemic in March 2020. For the week ended August 26, first-time jobless claims fell to 340,000 (see chart).

Analysts had been expecting a higher level of filings, at 345,000. The number of continuing claims fell 160,000 from the previous week to 2.75 million, the sharpest plunge of that metric since the coronavirus outbreak in early 2020.

To be sure, we’ve gotten a few mixed signals on the economy. The Conference Board reported Tuesday that U.S. consumer confidence fell to a six-month low in August. Also on the downside, a report Wednesday from payroll processor ADP showed that U.S. businesses created 374,000 new jobs in August, versus 600,000 expected. Dour news coverage of COVID Delta and Afghanistan probably contributed to this disappointing data, which means the setbacks could prove ephemeral as fiscal stimulus takes center stage this month.

But there are other sources of worry. Scheduled to expire on September 6 are enhanced unemployment benefits established 18 months ago under the $2.2 trillion Coronavirus Aid, Relief, and Economic Security (CARES) Act. Adding to the pressure on households, the federal eviction moratorium ends September 30.

Will millions of Americans this month get kicked out of their homes and become destitute? If so, the economy and stock market could tumble. However, I see plenty of countervailing reasons for optimism.

According to the Federal Reserve, there currently are more than 9.2 million unfilled job vacancies in the U.S. I expect to see these sidelined people entering the workforce in droves in the coming weeks, especially as vaccination rates accelerate and employers start offering better wages and benefits.

Another plus for the jobs market is the reopening of schools this fall. As kids leave the nest for the classroom, many parents are better able to return to work. Government workers will be returning to their desks as well.

Counter to the arguments of some observers, I don’t think the imminent termination of the CARES Act is sufficient motivation for people to take undesirable jobs out of desperation. Opponents of the CARES Act say its provisions for enhanced jobless assistance have dampened workforce participation. To me, this causal linkage is specious. Empirical research supports my contention.

The Wall Street Journal and a team of economists studied states that slashed unemployment benefits and those that didn’t. In a WSJ article published September 1, they reported:

“States that ended enhanced federal unemployment benefits early have so far seen about the same job growth as states that continued offering the pandemic-related extra aid.”

A Yale University study recently came to a similar conclusion.

More likely, the stubbornly low workforce participation rate has been in large part caused by pandemic-battered people evaluating quality-of-life issues, and not by the limited assistance provided by enhanced benefits. For many of these willfully unemployed, ample household savings combined with stimulus checks have made their wait-and-see attitude financially feasible. Working from home has underscored the dreariness of commuting to a cubicle.

The upshot: The labor force participation rate’s rebound to pre-pandemic levels will take time. Even under normal conditions, the participation rate typically undergoes a cycle that lags behind falling unemployment rates. That lag has been exacerbated by the socio-economic trauma of the pandemic.

Friday’s jobs report, on the other hand, was a mixed bag.

The Labor Department reported Friday that non-farm payrolls increased by 235,000, short of the 733,000 expected and compared to a gain of 943,000 in July. Still, the unemployment rate fell to a pandemic low of 5.2%, down from 5.4% in July, and the report marked the eighth consecutive month of net job growth.

After the opening bell Friday morning, the major indices were mostly trading in negative territory, with the NASDAQ and Russell 2000 bouncing between red and green in choppy trading. The Russell 2000, with its economically sensitive small caps, has risen 4% so far this week. The index is seen as a barometer of economic confidence.

A silver lining to Friday’s jobs report is the part to be played by the Federal Reserve. As the Fed ponders “tapering” this year, the central bank is likely to err on the side of dovishness.

As the global economic expansion continues, international equities have been on the upswing. Japanese stocks soared to a three-decade high this week, after reports that Prime Minister Yoshihide Suga would resign, due to public frustration with his maladroit handling of the pandemic. The race to succeed him is wide open, but expectations are that his replacement will implement more effective public health policies, as well as fiscal stimulus.

Throughout Asia, ambitious infrastructure spending is providing a tailwind for global equities. Make sure your portfolio is geographically diversified.

In the United States, here are the major economic reports to watch, during the holiday-shortened week after Labor Day: 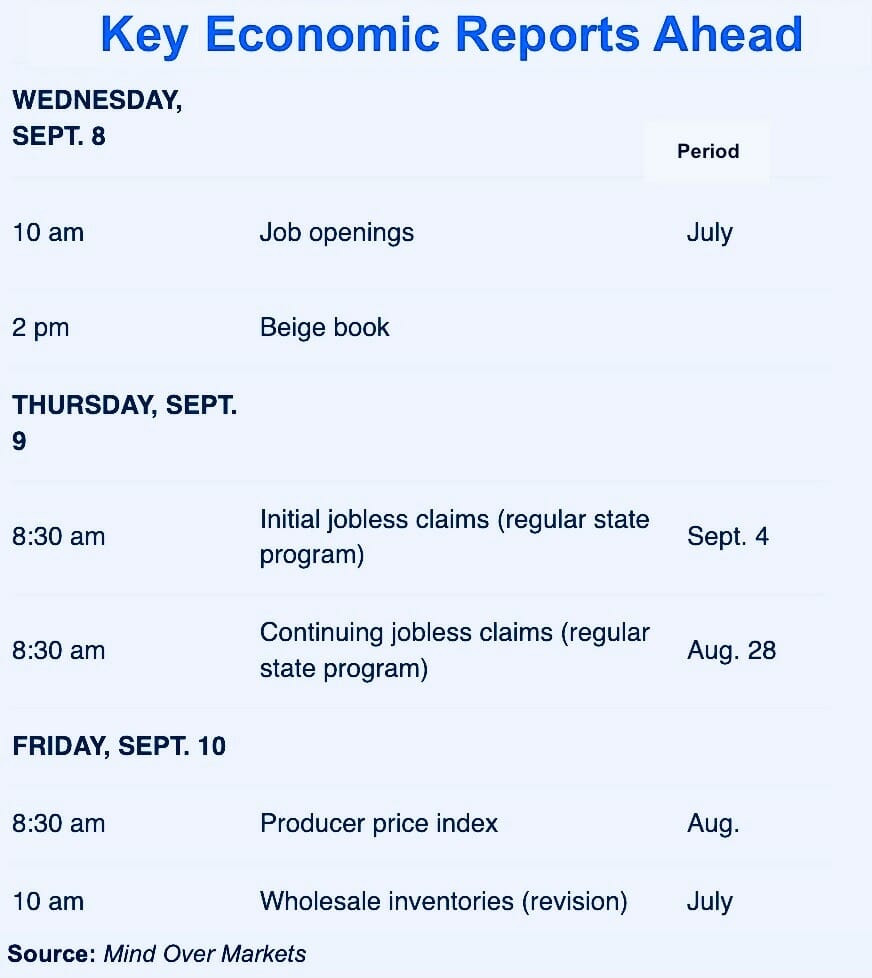 Your opportunity for rock-solid growth…

In my video embedded within this article, I discuss the dangers of reckless speculation and the fads (e.g., non-fungible tokens and crypto initial public offerings) that can wreck your portfolio.

In the meantime, if you’re looking for an intrinsically sound growth stock, we’ve found one that’s suitable for all types of investors.

This firm is the world’s only producer of a rare, futuristic material that’s essential for biological medicine, the Internet of Things, aeronautics, autonomous vehicles, microchips, 5G telecommunications, and other leading-edge technologies. Click here for details.