Why The Pessimists Are Wrong About China

I call them the “professional pessimists.” Their finger-wagging is a dramatic pose to impress the financial media.

These perpetual scolds often aim their tired schtick at China. Throughout 2021, they’ve been forecasting a hard landing for the Chinese economy. They warned about the same thing in 2020. They’ve been proven wrong, twice. I guess they’ll dust off their apocalyptic forecasts in 2022.

In the meantime, China is booming and providing a tailwind for the rest of the global economy.

In futures contracts Wednesday, U.S. stocks were trading essentially flat. However, Asian and European stocks have been on the rise this week, in the wake of surprisingly strong economic data from China. 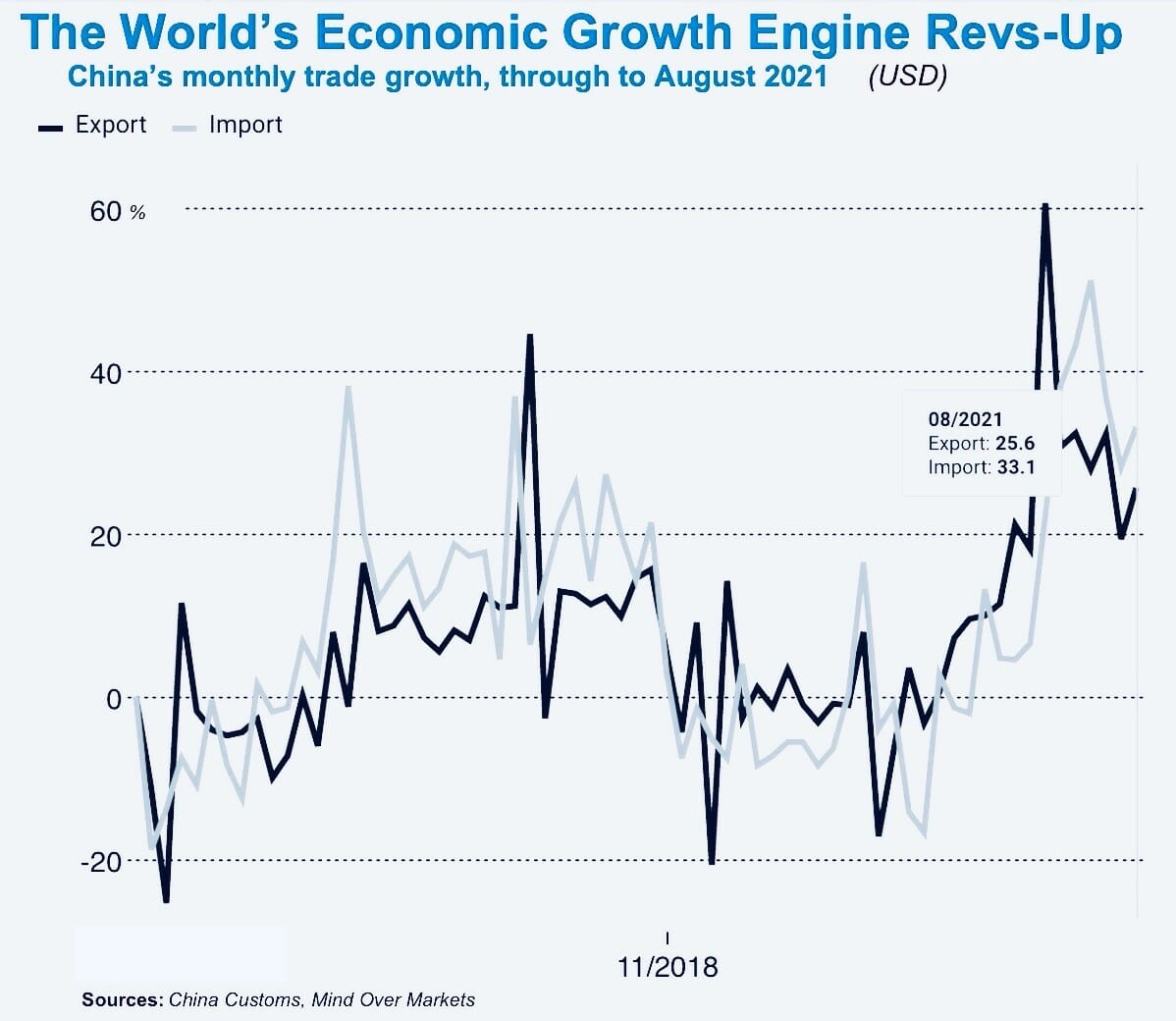 For the first eight months of 2021, Chinese exports and imports surged year-over-year by 34% and 35%, respectively. China’s trade surplus reached $362.5 billion, up nearly 30%. Analysts expect these numbers to stay robust, as we enter the year-end shopping season.

The jump in China’s trade activity has occurred despite a global shortage of shipping capacity and worries that the pandemic might worsen. Fact is, China and the rest of Asia have generally gotten a handle on the virus, through aggressive public health precautions. Vaccination rates and mask-wearing in Asia are considerably higher than in the U.S., which in turn lowers Asia’s infection and death rates. That gives Asia’s economies a leg up.

The export-manufacturing sector has been the quickest way for Beijing to deliver domestic jobs. China’s leadership is likely to continue growth-oriented policies into the foreseeable future, with massive monetary and fiscal stimulus.

China is only a nominally Communist state. For these mandarins of mercantilism to remain in power, they must improve standards of living for the population. Trouble comes when the Chinese people see a drop in their real income, which was a factor that triggered the bloody Tiananmen Square uprising in 1989.

The “iron rice bowl” is a Chinese euphemism for job security. In their quest for providing that security, China’s policymakers have identified four pillar industries, namely energy conservation and environmental protection; biotechnology; next-generation information technology; and advanced machinery and equipment. Tying all of these themes together is infrastructure development.

Infrastructure will remain one of the most salient investment themes of the 2020s. It’s a global story, but the quickening urbanization of Asia makes it a particularly appealing opportunity in that region.

Although Asia’s infrastructure has improved dramatically, the work has been concentrated in the higher-income economies of China, Hong Kong, South Korea, Singapore, and Taiwan. However, India, Indonesia, Thailand, the Philippines, and Vietnam have been catching up in a big way.

China’s infrastructure projects are particularly good news for commodities prices and the miners of these raw materials. China’s ambitious “Belt and Road Initiative” extends through 60 partner countries, with planned construction that will consume huge amounts of raw materials for several years. The room for growth in public works spending is enormous, with efforts focused on electricity, roads, railways, ports, airports, telecommunications, and water.

Beijing also is intent on moving away from fossil fuels to embrace electric cars and renewable energy. These technologies consume vast amounts of raw materials.

It makes sense for investors right how to increase exposure to commodities. The world is clamoring for vital raw materials, such as copper, zinc, lithium, and rare earth minerals. As China’s economic growth accelerates, these commodities should soar in price. The “roaring 2020s” will usher in a transnational super-cycle in commodities.

Commodities also make a classic hedge against inflation, which is showing signs of increasing as fiscal and monetary stimulus exert their influence. For details about a mining company that’s positioned to prosper amid the conditions that I’ve just described, click here now.