Are you gonna believe me, or your lyin’ eyes?

That seems to be the mantra of the pot prohibitionists, who continue to make baseless assertions about the dangers of marijuana legalization. In this post-truth era, the facts don’t seem to matter, as people are increasingly driven by their pre-existing ideologies.

Latest example: This week, yet another empirical survey was released that debunks the oft-asserted notion that legalization prompts teenagers to increasingly partake of marijuana. Anti-pot crusaders dismissed the data out of hand.

Youth marijuana use does not increase after states enact legalization for medical or recreational use, researchers concluded in a study published on September 7 in the prestigious Journal of the American Medical Association (JAMA).

JAMA is considered the gold standard of medical journals and the definitive mouthpiece of the medical establishment.

Pot prohibitionists promptly disparaged the JAMA study, countering it with shop-worn anecdotes and cherry-picked data. Efforts to stop marijuana legalization continue apace in several states. “Family values” and the protection of children from the scourge of drugs are often cited as the motivation for their opposition to legalization.

War on Drugs, War on Democracy…

South Dakota is a case study in how the War on Drugs erodes civil liberties and democratic processes.

On September 1, a South Dakota state government study committee recommended that residents shouldn’t be able to grow marijuana in their homes and cannabis stores should be compelled to buy pot seeds out of state. The goal is to roll back major provisions of what voters decisively passed via Amendment A and Measure 26 last November.

South Dakota Constitutional Amendment A was a cannabis legalization initiative that passed with 54% of the vote. The measure would have legalized recreational marijuana in South Dakota effective July 1, 2021.

South Dakota Measure 26 was an initiative to legalize medical cannabis. Amendment A and Measure 26 appeared on the same ballot. Measure 26 passed by a whopping 70% margin.

South Dakota would have become the first state in U.S. history to legalize recreational and medical cannabis simultaneously. But anti-marijuana forces had other ideas.

Private groups immediately challenged the legalization measures in court, on arcane legal technicalities. The state’s Republican governor, Kristi Noem, threw her support (and in a controversial move, taxpayer money) behind the legal challenge.

South Dakota has one of the harshest cannabis laws in the U.S. Possession of any amounts of edibles, hash, and concentrates is a felony, punishable by up to 10 years in prison and a fine of up to $20,000.

The legal fight over marijuana in South Dakota is still tied up in the courts, so marijuana remains illegal in the state, despite the resounding verdict from voters last November.

The JAMA study found that legalization has an overall impact on adolescent cannabis consumption that is “statistically indistinguishable from zero.” The following charts tell the story: 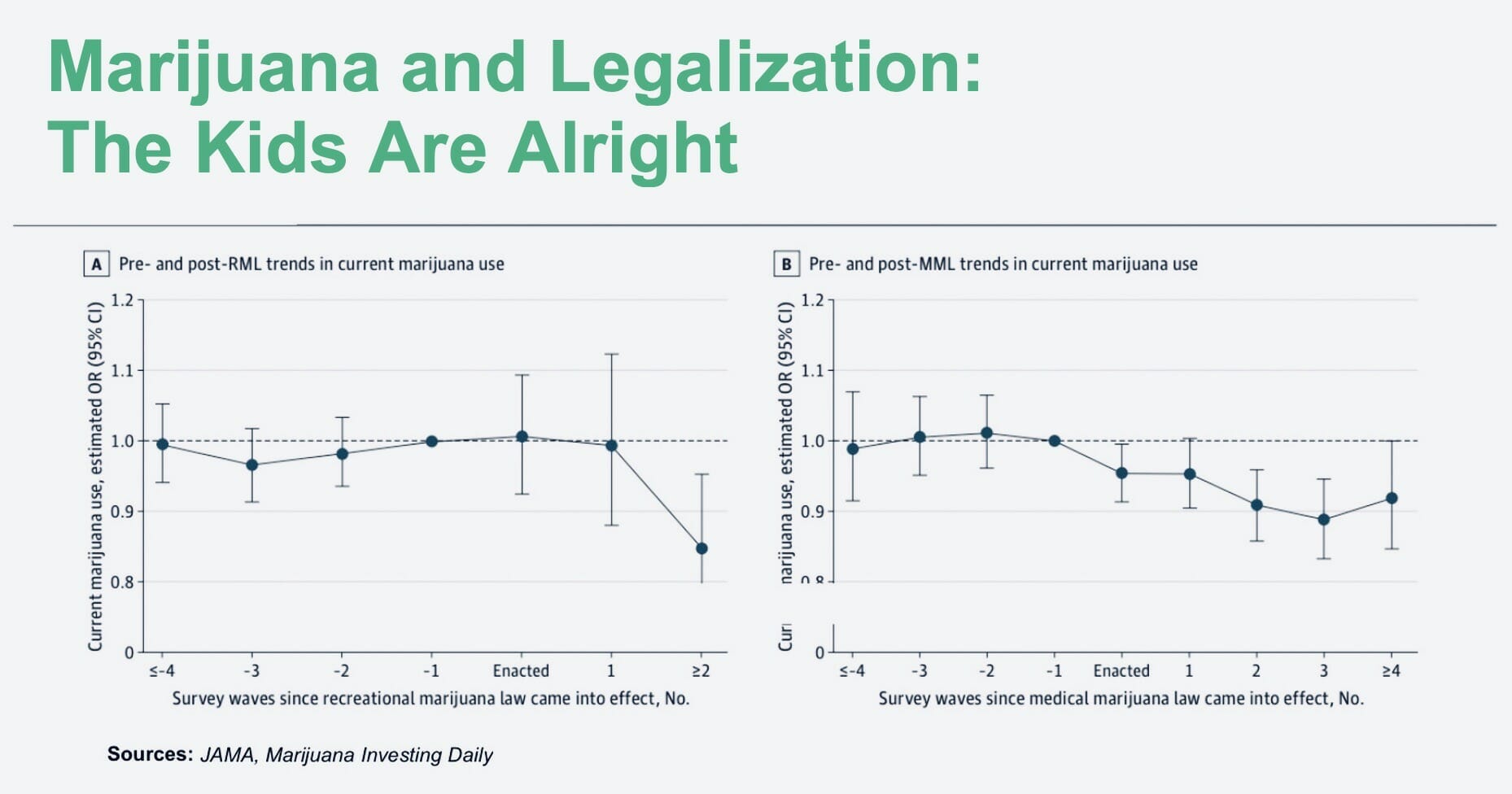 Indeed, according to JAMA, setting up regulated cannabis programs leads to lower marijuana use among adolescents under certain measures, a finding that directly contradicts the arguments of anti-pot crusaders.

The study also found that youth cannabis consumption decreased in states where recreational legalization had been in place for two years or more. The study states:

“Consistent with estimates from prior studies, there was little evidence that RMLs or MMLs encourage youth marijuana use.”

The study didn’t offer a reason for these findings, but sociologists and public health experts speculate that when marijuana becomes a mainstream consumer product, it loses its mystique as a way to rebel against authority. For kids, marijuana is no longer cool and edgy, when they see their parents and grandparents legally partake of cannabis to ease ailments such as arthritis.

The JAMA study confirms the results of many previous studies. For example, a federal government report, released May 2021, analyzed youth surveys of high school students from 2009 to 2019 and concluded that there’s been “no measurable difference” in the percentage of those in grades 9-12 who reported consuming cannabis at least once in the past 30 days.

Don’t get me wrong: I’m not arguing that kids should smoke pot. Nor am I suggesting that parents and community leaders be lax about monitoring drug use among our children. Instead, I simply want to highlight the overwhelming consensus of government researchers, academics, and medical professionals: legalization does not encourage pot use among kids (despite political rhetoric to the contrary). This fact destroys a main argument used by those who want to keep marijuana illegal.

The upshot: Efforts to impede the legalization of marijuana are doomed to fail. The “culture war” over pot that’s raging in states such as South Dakota represents a speed bump, not a permanent obstacle.

Looking for ways to profit from the inexorable mainstreaming of cannabis? Click here for our free report.