How to Profit from Higher Oil Prices

I don’t hear many people talking about the price of oil these days. Perhaps they should. At the start of this week, oil traded above $75 a barrel for the first time since July.

From a technical perspective, oil is close to breaking above a major resistance level. If oil can rise above that, the next area of resistance is above $100. That creates an investment opportunity that I will address further below. 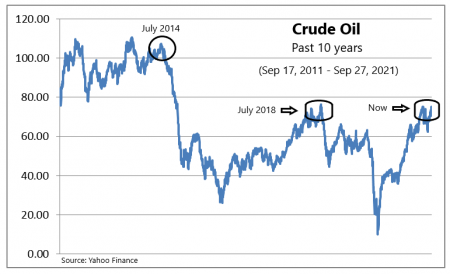 The last time oil traded above $100 was in July 2014. Before the end of that year, it fell below $54. Since then, it has struggled to stay above $60. The $60 price is important. At that level, most deep-sea drillers can make a profit. But once oil drops below $50, some drillers start capping their wells.

This time, I believe the price of oil will not once again quickly retreat below $60. Higher commodity prices are here to stay thanks to trillions of dollars of monetary stimulus pumped into the economy in response to the coronavirus pandemic. I don’t believe the recent inflation of oil prices is transitory, either. Neither does the U.S. Energy Information Administration (EIA), which issued this statement a few weeks ago:

From a longer-term perspective, the EIA projects that production and consumption of crude oil in the United States will continue rising until 2030. After that, demand for oil is expected to wane as electric vehicles replace gasoline-powered combustible engines.

Although the price of oil has doubled during the past year, the share prices of the biggest oil producers have not. Chevron (NYSE: CVX) is up 50% over the past 12 months while Exxon Mobil (NYSE: XOM) has gained 70%.

To be sure, the financial damage inflicted on the small fraternity of oil “supermajors” over the past 18 months has been substantial. In April 2020, Royal Dutch Shell (NYSE: RDS.A) announced that it would cut its dividend for the first time since World War Two. The company also halted its share repurchase program to hang on to its precious cash.

Those days are over. In July, Shell raised its dividend and initiated a $2 billion share repurchase plan. Now, excess cash sitting on the books is viewed as a drag on performance.

It is that dynamic that creates the investment opportunity that I alluded to above.

There will be a lot of oil-producing assets coming up for sale soon. Two years ago, French oil giant TotalEnergies (NYSE: TTE) announced that it would divest $5 billion in oil exploration and production (E&P) assets to pivot away from carbon-based fuel sources.

Since then, several other energy and utility companies have followed suit. In an effort to drive up their environmental, social, and governance (ESG) scores, they are dumping oil assets as fast as they can.

That’s good news for the buyers of those assets. As with all goods, when the number of sellers outweighs the number of buyers, prices go down.

That means Chevron, Exxon Mobil, and Royal Dutch Shell will be able to expand their oil-producing portfolios while increasing their average operating margins at the same time. With demand for oil rising at the same time, the net result should be a surge in profits for those companies.

The easiest way to play this expected surge in oil company profits is to buy shares of the SPDR S&P Oil & Gas Exploration and Production ETF (XOP). Although XOP has more than doubled in value during the past year, it is still well below its peak price three years ago.

However, XOP may not fully participate in the profit surge I am expecting over the next three years. The fund’s biggest positions are in small to medium-sized oil producers that will not be able to bid against the giants for the assets hitting the market.

For that reason, the Energy Select Sector SPDR Fund (XLE) may be a better choice. XLE’s top two holdings, Exxon Mobil and Chevron, comprise 43% of the fund’s total assets.

This fund is cheap. The weighted average earnings per share (EPS) growth rate of its portfolio is 13.4%, while its forward price-to-earnings ratio (FPER) of 15.8 is roughly a third less than the same multiple for the S&P 500 Index.

According to my analysis, XLE could appreciate 20% or more by the end of next year. That’s a decent return, but I know of a way to quintuple that return to more than 100% over the same span using a seldom-used but simple trading strategy.

I am using that same technique for many of the trades that I am making in my new premium advisory service, Personal Finance Pro. To find out more about it, CLICK HERE.