Supply Bottlenecks Help Some, Hurt Others

This is a good time to be in the railroad business. The global supply chain bottleneck that is driving up consumer prices is increasing demand for some of the companies that transport those goods.

That’s because ports all over the world are backed up, in some cases for several weeks. That has manufacturers frantically searching for alternatives. Once they get their merchandise on dry land, they can use trucks, railroads, and just about anything else that rolls for the rest of the journey.

The news is not so good for the shipping companies. Many of their boats are stuck at sea, burning through cash as they wait for their turns to unload goods.

Read This Story: Just How Bad Is The Supply Chain Mess?

After cresting at $32 on September 15, the SonicShares Global Shipping ETF (BOAT) traded down to $27 five weeks later. Most of the publicly traded shipping companies it owns are domiciled in Asia.

According to the fund’s website, this exchange-traded fund “provides pure-play exposure to the global maritime shipping industry.” Its objective is to track the performance of the Solactive Global Shipping Index.

If you’ve never heard of this fund, that’s probably because it was launched only three months ago. At the time, robust consumer spending trends in the USA meant more merchandise being shipped from Asia.

Those goods will get here in time for the holiday gift season, but the fear is that items ordered now may be late. And if a lot of them are going to be later, consumers may decide to gift something else instead.

For many retailers, the next 10 weeks are the most important time of the year, especially after the past 18 months when costs associated with the pandemic ate into already narrow profit margins.

Consider the fate of brick-and-mortar retailer Bed Bath & Beyond (NSDQ: BBBY). In March 2020, BBBY fell below $4 when COVID-19 temporarily shut down most of its stores.

The huge short position in the stock at that time attracted the attention of “meme stock” traders. On January 27, BBBY surged above $53 as daily trading volume exceeded 90 million shares. 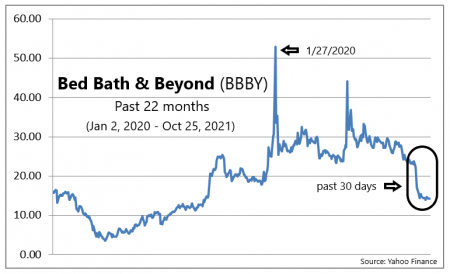 Two weeks ago, BBBY fell below $15 on trading volume of less than 4 million shares. It appears the meme stock traders that drove it higher now realize that declaring bankruptcy may soon become a reality for Bed Bath & Beyond.

If that happens, its common stock will immediately become nearly worthless. That explains why at the end of September, short interest in the stock neared 50% (and is probably higher than that now).

When Bed Bath & Beyond released its fiscal 2021 Q2 results (ending August 28) a month ago, it acknowledged that escalating freight costs negatively impacted its gross margin. According to company CEO Mike Tritton: “We saw steeper cost inflation escalating by month, especially later in the quarter, beyond the significant increases that we had already anticipated.”

Unfortunately for Mr. Tritton, those costs will keep going up until the shipping bottlenecks are resolved. Some industry experts predict that will not happen until early next year.

That puts Bed Bath & Beyond in a bind. If it raises prices to offset costs, consumers will buy elsewhere. But if it keeps prices low to be competitive, it will lose money on the sale.

In that regard, Bed Bath & Beyond has become the corporate manifestation of an old joke: “We lose money on every sale, but make it up in volume.” If it were an electric vehicle manufacturer, Bed Bath & Beyond wouldn’t have to produce any profits at all. But it sells household merchandise that can just as easily be bought online, so it has a very serious problem.

The extent of that problem can be seen in the options market. Last week while BBBY was trading near $15, a put option that expires in January 2023 at that strike price could be bought for $5 (a put option increases in value when the price of the underlying security goes down).

For that trade to be profitable, BBBY must lose at least a third of its value. If that happens, that means Bed Bath & Beyond is in serious financial trouble. For this company to remain in business, it needs to find a solution to its shipping problem before it sinks them.

As I’ve just explained, sometimes the stock market provides a brief window of opportunity to cash in. Those are the types of trades that I am looking for with my new service, Personal Finance PRO. Every month, I issue trades that I believe are about to surge in value. Want to take investing to the pro level? Click here for details.