Italy taught the world how to live La Dolce Vita. The phrase means “the sweet life,” as immortalized by Fellini’s famous film. The last time I visited Rome with my wife, we were reluctant to return home to the United States.

An ancient culture that once ruled the world, Italy currently is the largest market for luxury goods in Europe. Italy is the third-largest national economy in the European Union and the eighth largest in the world.

Italy is the second-largest manufacturer in Europe (behind Germany), the world’s largest wine producer, and renowned for the style and high quality of its automobiles, aircraft, appliances, and fashion.

Italy set the standard for eating and drinking. And now this sun-splashed Mediterranean peninsula is embracing new hedonistic avenues, in the form of marijuana and psychedelics.

Italy lags the rest of the developed world when it comes to pot reform. The Italians came fashionably late to the party. But the country’s current embrace of the marijuana movement is likely to cause a global ripple effect.

On Thursday, October 28, Italian activists submitted more than 630,000 signatures for a referendum to federally legalize the personal cultivation of marijuana and other psychoactive plants and fungi like psilocybin mushrooms.

The group ReferendumCannabis.it posted the following on its Facebook page on Oct. 28, to mark the occasion: 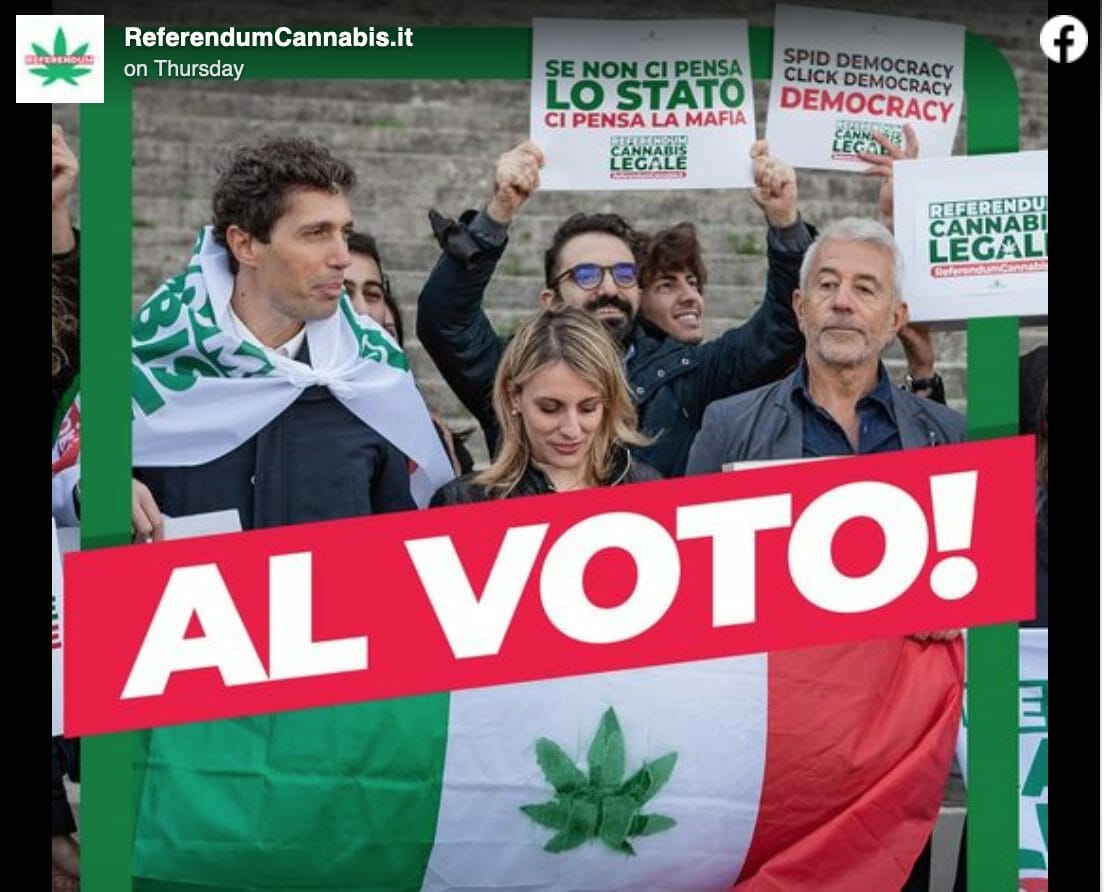 Europe is a booming market for marijuana and related psychotropic drugs. Italy’s actions will probably spur drug demand on the Continent and around the world. New investment opportunities will follow.

The Italian referendum question was first filed in September, and the reform campaign has now submitted sufficient signatures to qualify the measure to go before the nation’s voters in mid-2022. A recent change in ballot rules that allowed activists to collect signatures online expedited the process.

Polls show that 57% of Italian voters back the proposal. If it passes, Italy’s marijuana and psychedelics laws will go from the Continent’s most restrictive to its most permissive.

As is often the case in other countries, Italy’s current laws governing marijuana and psychedelics are a contradictory mishmash.

The psilocybin molecule is illegal in Italy, but magic mushrooms are decriminalized. Recreational and medical marijuana consumption is allowed, but selling and producing either weed or magic mushrooms is a serious criminal offense. (Confusing enough for you? What do you expect from a country that has had 66 governments since the end of World War II.)

The Italian government holds a tight monopoly on marijuana production. If approved, the initiative would legalize home growth of cannabis, psilocybin mushrooms, and other psychoactive plants for personal use.

The referendum also includes significant criminal reform components. Notably, it would lift a penalty that currently prevents people from legally driving or using a moped for up to three years if they’ve been convicted of using marijuana or psychedelics. Operating a motor vehicle while under the influence would stay illegal.

The referendum’s wording must now pass muster with the courts. If Italy’s judges allow the referendum to move forward, voters will get their chance to weigh in sometime between April 15 and June 15 in 2022.

A growing number of countries in Europe have decriminalized possession of cannabis, making marijuana easily obtainable across the continent. Regardless of respective laws and regulations, social attitudes are tolerant and the police tend to turn a blind eye.

Read This Story: The World Goes to Pot

The European cannabis market is forecast to grow at a compound annual growth rate (CAGR) of 67.4% to reach 3.2 billion euros ($3.75 billion) by 2025, according to a new report from the research group Prohibition Partners.

It’s not just in individual countries. Pan-national groups in Europe are giving marijuana the nod. Notably in November 2020, the European Court of Justice ruled that cannabidiol (CBD) substances should not be regarded as narcotics under EU Law. The United Nations also removed cannabis and its derivatives from Schedule IV prohibitions of the Single Convention on Narcotic Drugs.

As this article makes clear, there’s lots of money to be made on the global legalization of pot and psychedelics. As an investor, you should take a macroeconomic perspective. The fast growth of psychotropics consumption constitutes a worldwide phenomenon.

For our latest report on the best investment opportunities in cannabis and related substances, click here.