Snap quiz. Which wealthy business celebrity said: “I’d put my money on the sun and solar energy. What a source of power! I hope we don’t have to wait until oil and coal run out before we tackle that.”

Thomas Edison, way back in 1910. The genius inventor also was a prescient futurist.

The big winners in the post-pandemic world will be solar, wind and other renewable sources of energy. Renewable energy certainly won big on Monday, when President Biden signed the landmark $1.2 trillion infrastructure spending bill. Another winner in the bill: energy infrastructure, especially as it pertains to clean sources of power.

After the opening bell Wednesday, the four U.S. stock indices were trading mixed.

The U.S. Census Bureau reported Tuesday that retail sales rose 1.7% on a monthly basis in October, marking the largest gain since March. By comparison, September saw only an 0.8% increase (see chart). 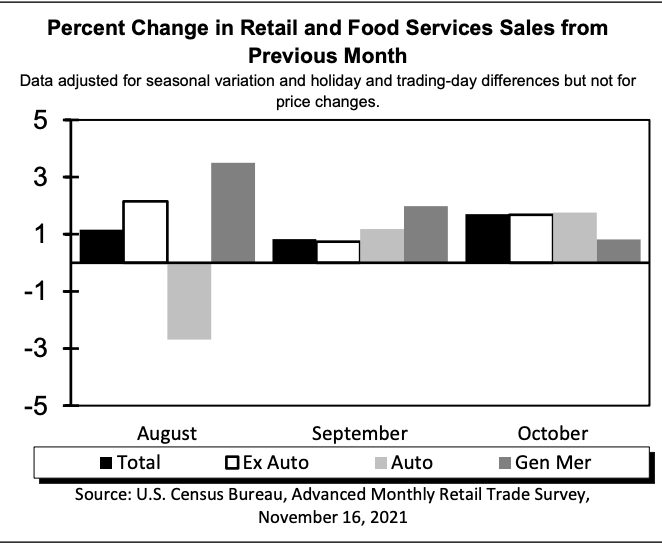 October’s retail sales number reflected the third consecutive monthly gain and surpassed consensus expectations of a 1.4% gain. On a year-over-year basis, retail sales rose 16.3% versus October 2020. Most impressively, sales were 21.4% higher than they were in October 2019, before the outbreak of the pandemic.

Goldman Sachs (NYSE: GS) told clients this week that the economy will get a boost from the service sector’s reopening and greater consumer retail spending.

Goldman Sachs expects the unemployment rate to drop from 4.6% today to 3.7% by mid-year and 3.5% by the end of 2022. The investment bank also expects inflation to be only “moderately above” 2% next year.

So why do polls show that most Americans think the economy is in dreadful shape and getting worse? Much of the blame stems from disingenuous media coverage. Be wary of news channels that generate ratings, and profits, by spreading negativity. (One of your most powerful investment tools is the “mute” button on your TV remote.) There’s plenty of encouraging news to justify bullishness, as I outline below.

Biden’s “Build Back Better” blueprint, which is now the law of the land, represents the nation’s biggest investment in infrastructure since the construction of the Interstate Highway System during the Eisenhower era.

Among its provisions, the infrastructure bill authorizes $7.5 billion for electric vehicle (EV) charging infrastructure. The funding would be sent to the states to partner with co-ops and other businesses to establish EV charging networks. The bill provides $2.5 billion for zero-emission school buses. 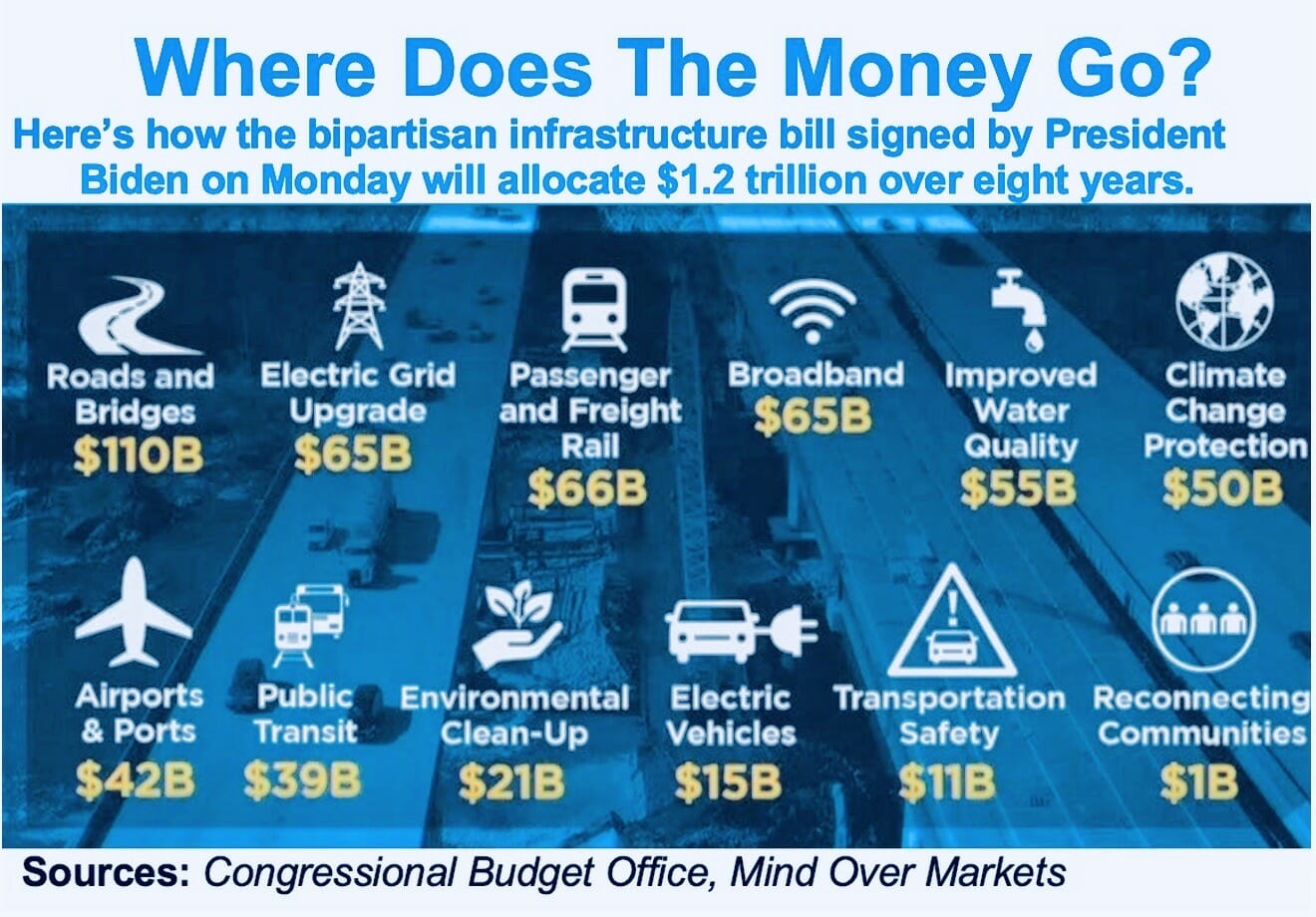 These new public-private partnership structures offer various ways for both public and private investors to participate, and to benefit from each other’s involvement. Private investors are earning sizable returns by helping to finance these projects directly, while public investors are benefiting from the greater earnings that flow through to their investments in various energy firms and developers.

Furthermore, new mutual funds and exchange-traded funds (ETF) are emerging to invest in these energy utility assets solely, or as part of more general infrastructure funds that include roads and bridges.

Investment products are getting segmented by country, region and risk profile. Government involvement also is allowing for the securitization of these public-private partnerships, with special tax incentives and other protections or guarantees to induce investment.

Utilities will make up a significant portion of future global energy infrastructure investment. Our investment team has pinpointed the best utilities stocks that provide pure-play exposure to the trends I’ve just described. For our list of leading-edge, high-income utilities stocks to buy now, click here.

John Persinos is the editorial director of Investing Daily. He also edits the premium publication, Utility Forecaster. To subscribe to John’s video channel, follow this link.