Inflation On Their Minds

I’m more inclined to quote Beatle Lennon than Bolshevik Lenin, but these words that were (supposedly) uttered by the Russian revolutionary leader seem apropos right now: “The way to crush the bourgeoisie is to grind them between the millstones of taxation and inflation.”

Various tax hikes are currently under consideration on Capitol Hill. As for inflation, it’s the number one worry for consumers, investors, and corporate managers. Below, I steer you toward a time-tested means of inflation protection.

Retail spending is robust, but at the same time, consumers are expressing a growing fear of inflation. The same is true at the corporate level: profits are strong, but managers are voicing their worries that inflation will spoil the party.

In pre-market futures trading Thursday, the major indices were trading in the green, as investors shifted their focus to third quarter earnings that are generally better-than-expected. More S&P 500 companies are beating earnings estimates for Q3 than average, and beating those estimates by a wider margin than average. What’s more, year-over-year revenue growth for the quarter is 17.3%, the highest rate since 2008.

Storm clouds are gathering overseas, however. Asian stocks have been slumping lately, as Japan’s economy posts surprisingly sluggish growth. The semiconductor shortage has particularly hurt the world’s third-largest economy, which heavily relies on automotive manufacturing. European stocks have been wobbly too, as the energy shortage on the Continent gets worse.

The question is, how “sticky” is highly elevated inflation? The longer inflation persists, the more structural it becomes, and the more companies get into the habit of hiking prices.

One aspect of rising inflation is that giant companies with market dominance are raising prices not because their costs are greater but because they want to take advantage of the inflationary climate to boost profits. And they’re getting scant push-back from consumers, as reflected by strong retail sales.

These price increases help explain the resiliency in Q3 of corporate profit margins, although projections for Q4 call for modest year-over-year decreases in margins.

Research firm FactSet (the data provider for Investing Daily) set out to answer this question: have more S&P 500 companies than normal commented on inflation during their earnings conference calls for the third quarter of 2021?

FactSet searched for the term “inflation” in the conference call transcripts of all the S&P 500 companies that conducted earnings conference calls from September 15 through November 12.

Among these companies, 285 cited the term inflation during their earnings calls for Q3, which far exceeds the five-year average of 137. This is the highest overall number of S&P 500 companies citing inflation on earnings calls going back to at least 2010 (see chart). 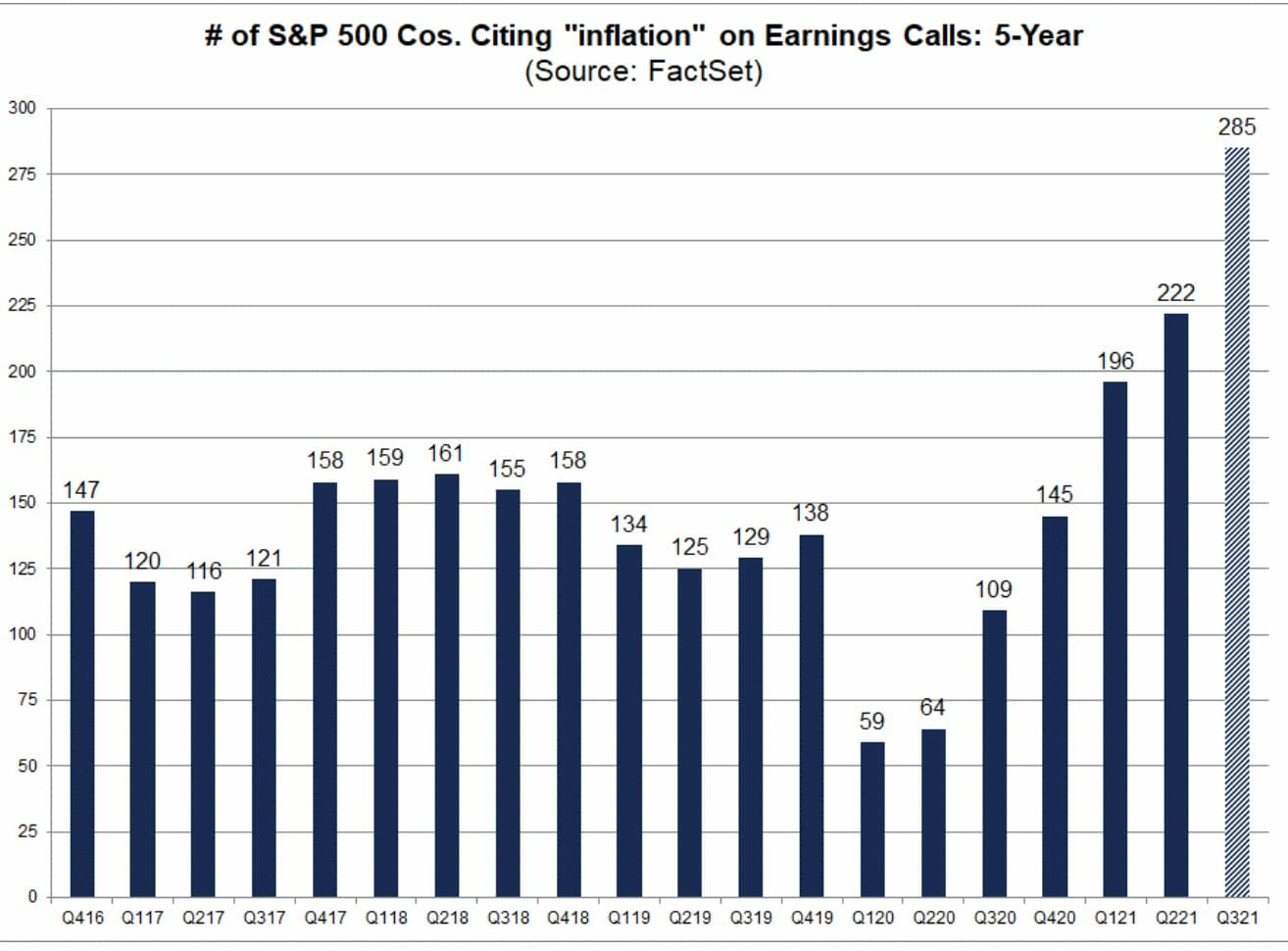 The industrials sector marked the highest number of companies that cited inflation on earnings calls for Q3, followed by financials, consumer discretionary, and health care.

As my article makes clear, you need to increase your portfolio’s exposure to inflation hedges. About 5%-10% of your hedges sleeve should contain gold, the traditional inflation hedge.

The value of gold tends to increase as the purchasing power of the dollar declines. The price of gold has soared this year and the “yellow metal” is on track to continue its ascent into the foreseeable future.

My preferred way to profit from increases in gold prices is through small-cap miners that can put corporate operating leverage to work.