Have you ever wondered what it’s like to lose $29 billion of personal wealth in a single day? Mark Zuckerberg, the founder and CEO of Meta Platforms (NSDQ: FB), the company formerly known as Facebook, can tell you what it’s like.

Last Wednesday evening, Meta released its fiscal 2021 Q4 and full year results. The company reported earnings per share (EPS) of $3.67 compared to $3.88 the year prior. Wall Street was expecting EPS to come in around $3.84.

To say that result disappointed the stock market would be a severe understatement. The next morning, FB opened more than 23% below where it closed the day before. That translates to a $213 billion decline in Meta’s market cap in less than 18 hours and a huge drop in Zuckerberg’s personal fortune. 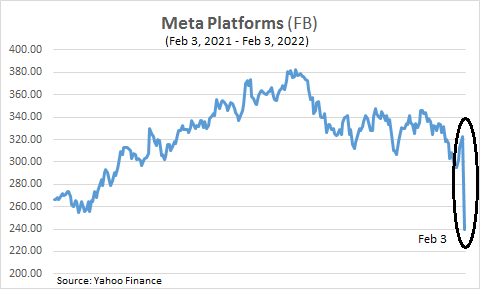 That loss set a new record for the biggest one-day drop in market value for a publicly traded company. It also dragged down the NASDAQ Composite Index and S&P 500 Index, both of which FB is a significant component.

I have to admit, I was surprised by the magnitude of Meta’s miss on earnings. However, I can’t say that I’m surprised that Wall Street bailed out on the stock so quickly.

Last summer, I warned my readers that “Mark Zuckerberg may finally get the comeuppance that so many have been wishing on him for so long.” It looks like that day has finally arrived.

In that same article, I suggested that social media platform Nextdoor (NYSE: KIND) might become a threat to Facebook. I said then, “Facebook’s margin is Nextdoor’s opportunity of a lifetime.”

Unfortunately, Nextdoor hasn’t fared any better than Facebook. After merging with a SPAC (special purpose acquisition company) three months ago to become a publicly-traded company, KIND has lost more than half its value.

But something interesting happened last Thursday that makes me think some folks on Wall Street are starting to take a closer look at Nextdoor. Initially, KIND fell in sympathy with FB in the morning. But that afternoon, KIND reversed direction while FB continue to flounder.

That is how it works on Wall Street. As soon as an industry leader hits the skids, the search commences for its replacement. And right now, it isn’t clear which company will become Facebook’s successor.

That uncertainty creates an investment opportunity. I still believe that Nextdoor will take away some market share from Facebook. And at a little over $5 a share, KIND is a cheap way to buy a stake in the social media space.

According to the fund’s sponsor, “Forecasts suggest the global social media market could triple from an estimated $100 billion in 2020 to more than $300 billion by 2025.” If true, then some of those companies could also triple in value.

Thus far, Facebook’s pain has not been Nextdoor’s gain. That may change in the future. But at the moment, it would appear neither company is gaining much traction with new users.

That begs the question, what platforms are the new social media enthusiasts using? From an investment perspective, knowing the answer to that question could be enormously profitable.

For my money, I’d rather leverage a bet on the entire sector than guess which company will be the big winner. I can do that by purchasing a call option on SOCL (a call option increases in value when the price of the underlying security goes up).

Last week while SOCL was trading near $46, the call option that expires on September 16 at that strike price could be bought for $5. For this trade to make money, SOCL must appreciate 11% over the next seven months. Keep in mind, it lost 7% last Thursday alone due to FB’s massive drop.

I expect two things to happen in the weeks to come: FB will gradually recover some of last week’s loss, and some of its competitors will jump on a big inflow of institutional investor capital.

If I’m right about that, then it may not be long until SOCL is trading above the $51 breakeven point for this trade. And if that happens soon, there will also be a lot of time premium left in our option.

Sure, that’s a risky way to make money in the stock market. But it isn’t often that a sea change in sector leadership occurs in a single day. This is one of those times that I feel the reward is worth the risk.

Editor’s Note: You’ve just received insightful investment advice from Jim Pearce, but there’s another colleague you should get to know: Jim Fink.

Our team has put together a new presentation to explain how it works. Click here to watch.