Inflation is an emotional topic. In fact, the most passionate emails that I get from readers concern inflation. Many older investors are still haunted by the hyper-inflation of the 1970s, akin to war vets with PTSD.

But as we put a dismal January behind us and February gets underway, there are glimmers of good news on the inflation front. Below, I put current inflation conditions into context, with concomitant trading advice.

Signs have emerged that perhaps the market isn’t too worried about an abundance of inflation after all. Inflation is pronounced enough to take seriously, but it doesn’t justify panic.

Inflation is the dominant investment story. However, over the past six months, trends for the U.S. dollar and gold indicate that investors aren’t too worried that inflation will get out of control (see chart, with data as of market close February 7): 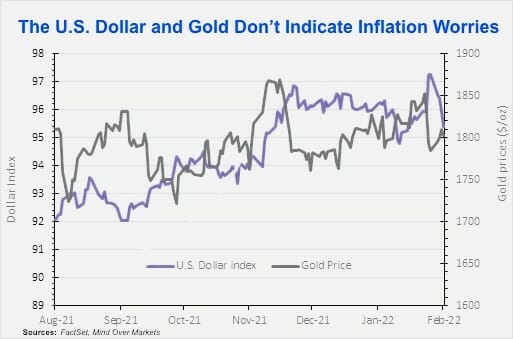 The textbooks tell us that higher inflation leads to higher interest rates, which in turn should generate greater demand for the dollar. And inflation is supposed to increase demand for the yellow metal, which is considered a safe haven during times of inflation and crises. However, this textbook scenario has not panned out from August 2021-January 2022.

In recent days, the dollar has dipped and gold has popped, so we’ll see if sentiment significantly changes. All eyes will be on the next report for the U.S. consumer price index (CPI), which is scheduled for release on Thursday.

The personal consumption expenditures (PCE) index, the Federal Reserve’s preferred inflation gauge, came in at 5.8% in December, up from 5.7% the previous month.

However, the Fed is predicting that inflation will substantially moderate toward the end of 2022, as supply imbalances get ironed out.

Indeed, some analysts contend that inflation in the latter half of 2022 will get a lot closer to the Fed’s target rate of 2%. That would give the Fed more leeway to actually ease up on tightening, if warranted by economic conditions. A combination of moderating inflation with a dovish Fed pivot could provide the catalyst for another upward surge in stocks.

Moderate inflation has not hampered U.S. stock gains in the past. Also, let’s not forget long-term deflationary factors at work, such as globalization, an aging demographic, and rising automation.

Regardless, you should position your portfolio for an inflationary environment. Keep a global perspective. As inflation takes hold, it’s affecting multiple regions rather than a single country. Almost every central bank in the world started pumping money into its respective economy, trying to stimulate growth, in response to the COVID outbreak in early 2020.

Just as central banks are thinking beyond the borders of their own nations, so too must investors who are concerned about hedging themselves against inflation. The usual hedges still apply (e.g., hard assets, mining, infrastructure projects, real estate, metals, and inflation-protected bonds), but your investments also must reflect a global character to be effective.

It’s not just inflation. Additional investment risks include a possible outbreak of war in the Ukraine; political gridlock (maybe even violence) in the U.S. ahead of the midterm elections; an unexpected resurgence of COVID; sputtering growth and massive debt woes in China; and the contractionary effects of higher interest rates.

To reap profits but also mitigate the risks I’ve just described, consider the trading methodologies of my colleague Jim Fink.