The other day, a friend asked me how to play the war in Ukraine. With oil prices spiking, he wondered if now might be a good time to buy into the energy sector.

My answer surprised him. “Why take a risky bet on the energy sector,” I said, “when you have a sure thing with infrastructure?”

I was not referring to the rebuilding that will eventually take place in Ukraine. It may be several years before that happens, perhaps decades.

I was talking about the $1.2 trillion of infrastructure spending that will be happening in the United States. Six months ago, the Infrastructure Investment and Jobs Act was passed into law.

I don’t hear the talking heads of the mainstream financial media discussing infrastructure stocks much these days. Instead, they mostly talk about inflation and Federal Reserve monetary policy.

To be sure, the long-term ramifications of rising consumer costs are profound. That’s why I recommended that you Fight Inflation with Real Assets earlier this year.

That strategy is a defensive measure designed to protect your portfolio from losing value. Now, I am suggesting that you also play offense by buying infrastructure stocks while they are still affordable.

Moving in Opposite Directions

Despite their similar performance during the past year, the two funds have moved in opposite directions in 2022. Year to date, SPY has lost nearly 6% while IFRA has gained almost 2%. 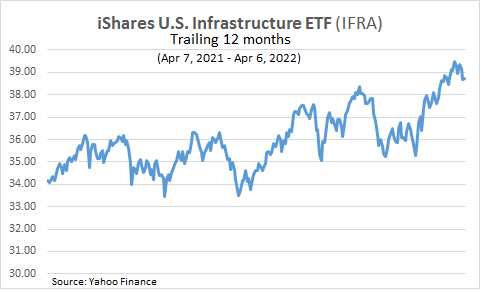 That may not seem impressive until you consider the fact that only two sectors of the S&P 500 Index are in positive territory in 2022. Energy companies are up nearly 40% thanks to soaring oil prices.

At the same time, utilities have gained 7%. That should come as no surprise since $65 billion of the new infrastructure money is dedicated to upgrading the nation’s energy grid.

The expected impact of future infrastructure spending is visible in individual stock prices. Heavy equipment manufacturer Caterpillar (NYSE: CAT) is up 5% this year while its rival Deere & Co. (NYSE: DE) has already gained 20% in 2022.

One reason why the recent strength of infrastructure stocks has gone largely unnoticed is that they do not fit neatly into any of the 11 S&P 500 sector classifications. Some of them are utilities while others are industrials, telecoms, energy, and materials.

Read This Story: Infrastructure: Your Bridge to Profits

For that reason, Wall Street does not have a convenient mechanism for betting on infrastructure stocks. The closest it can come is trading options on an exchange-traded fund such as IFRA.

Trading volume in IFRA options is too light for the pros to get involved. However, that’s not a problem for individual investors with smaller portfolios to manage.

If you are looking for a relatively safe way to play infrastructure spending in the U.S. over the next several years, owning shares of IFRA might be a good way to do that. The fund’s portfolio is made up of 41% utilities, 33% industrials, and 16% basic materials.

If you want to leverage that bet, you can buy a call option on IFRA. A call option increases in value when the price of the underlying security goes up.

Last week while IFRA was trading near $38, the call option that expires on August 19 at that strike price could be bought for a little under $3. For this trade to be profitable, IFRA must rise above $41 within the next five months.

Normally, expecting an 8% rise in only five months would be an optimistic outlook. But in this case, I think more money will begin flowing into infrastructure stocks as the Fed raises interest rates several more times over that span.

Given how little separation there is between infrastructure companies and the overall stock market at the moment, a rise of that magnitude is not unreasonable. And if rising interest rates drive investor capital out of mega-cap tech stocks, infrastructure stocks could soar later this year.

However, if that type of trading is too speculative for you, consider our premium publication, Rapier’s Income Accelerator, helmed by my colleague Robert Rapier.