Infrastructure: Your Bridge to Profits

The youngsters in my family sometimes express glib cynicism about politics. They even question the purpose of voting. But as I sternly remind them, elections have consequences. Events this week have provided a convincing civics lesson.

President Biden signed the $1.9 trillion coronavirus relief bill Thursday, enacting into law a package of social and economic programs so transformative in scope, they hark back to the New Deal of the 1930s. Individual stimulus checks of $1,400 could be making their way to checking accounts as soon as this weekend. Measures related to taxes, unemployment insurance, health care, and a slew of other areas will soon kick in, affecting millions of American households.

Whether you approve of these new government initiatives or not, they’re the law of the land. Wall Street, pragmatic as always, is thrilled by the new round of stimulus. To be sure, fiscal hawks are sounding the alarm that this spending could ignite runaway inflation. I don’t share their concern, but some of my readers do. I addressed inflation worries (and what investors should do about them) in a recent letters-to-the-editor column.

Now that Biden’s COVID aid bill is out of the way, next up to the plate: infrastructure spending. You should be proactive and increase your exposure to this segment ahead of legislative action. Below, I’ll show you how.

Biden and the Democrats already have proven adept at getting major legislation passed, even without bipartisan support. Biden’s Build Back Better plan calls for spending of $7 trillion, much of it on infrastructure and initiatives to foster the transition to green energy.

The new spending would serve several purposes: shift the economy toward leading edge technologies, repair a crumbling transportation and waterway system, and generate jobs at a time when unemployment levels are still high.

In pre-market futures trading Friday, the major indices were taking a breather. But the long-term future for stocks is looking bright. According to research firm FactSet (the data provider for Investing Daily), the analyst consensus is for the S&P 500 to gain 17.5% over the next 12 months. However, FactSet found that infrastructure-related stocks with majority “buy” ratings from analysts are projected to gain nearly double that percentage over the same time frame.

The COVID relief bill, although hugely popular with voters of both parties, garnered zero Republican votes in the House and Senate. Infrastructure will be a tough sell in a divided Congress, but Democrats vow to push through with the effort, even to the point of perhaps blowing up the Senate filibuster to do it.

The coronavirus emergency helped grease the skids for passage of the relief bill. Infrastructure poses a crisis of its own that’s been in the making for decades. Take a look at the following chart, published March 10 by the research firm Statista: 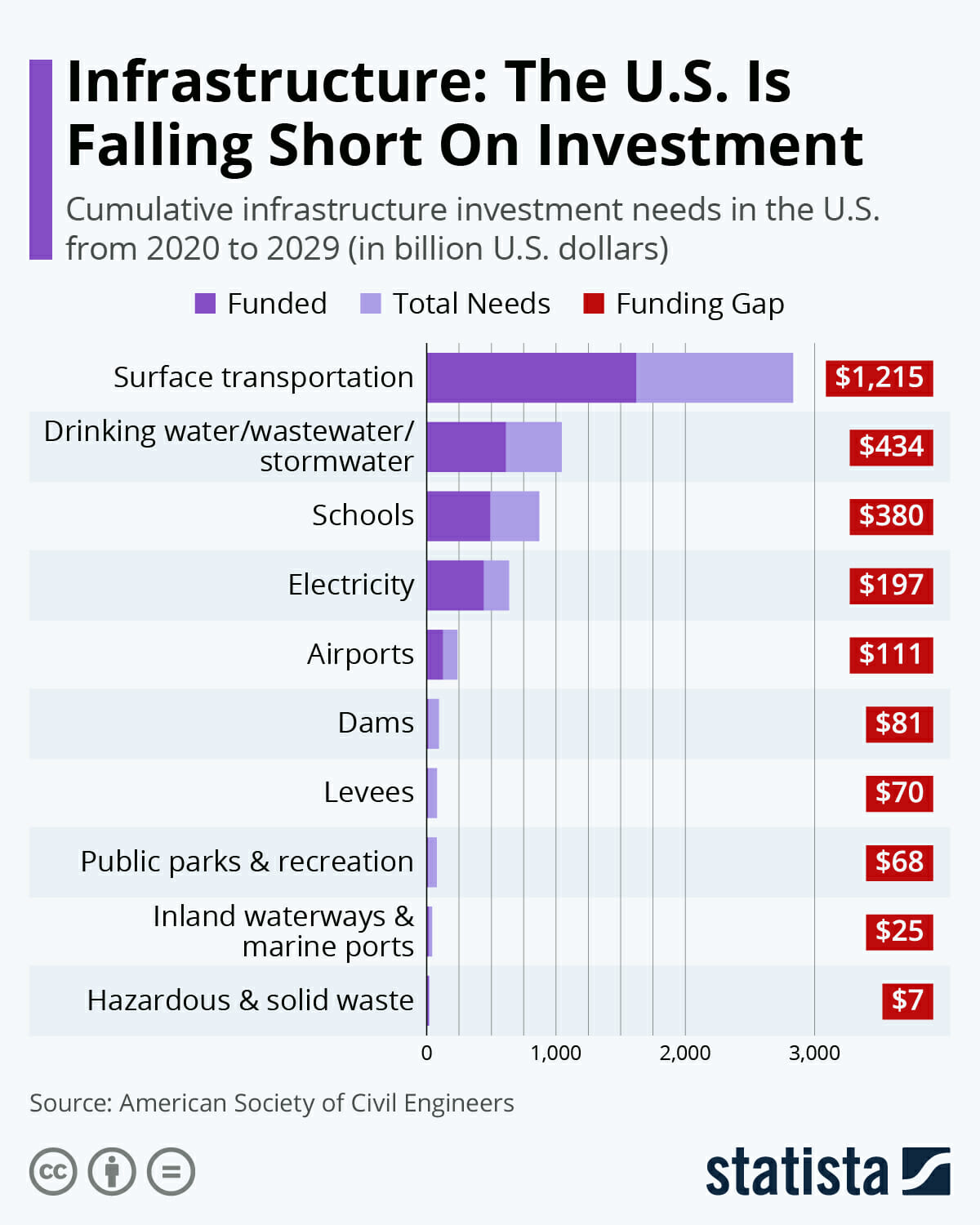 The American Society of Civil Engineers (ASCE) on March 4 released its 2021 Report Card for America’s Infrastructure, a comprehensive assessment of 17 major infrastructure categories compiled once every four years. The nation’s grade point average this year: C-. Ordinarily, a weak grade would be disappointing, but for investors, it’s actually good news.

Infrastructure enjoys a bipartisan coalition of support, because it entails state and local spending that both red and blue states require. What’s more, the construction firms that will benefit hire lobbyists that influence both political parties. The previous Republican administration continually promised an infrastructure bill. Although one never came to fruition, the public was generally receptive to the idea.

Despite the bitter polarization on Capitol Hill, Biden (a Senator for 36 years) and Majority Leader Chuck Schumer (D-NY), are experts at political horse-trading. The odds are favorable that an infrastructure bill will become law this year.

And if the 50-50 Senate proves to be a graveyard for Biden’s infrastructure plans? State and local government leaders aren’t waiting to find out.

Governors and mayors of both political parties are pushing for big spending increases of their own this year, to upgrade sub-standard bridges, roads, sewer systems, airports, railroads, waste management, and water systems. These state and local efforts aren’t getting much attention by the mainstream media, because news executives think the topic is too “wonkish” and bad for ratings. But it’s happening.

Now’s the time to increase your exposure to publicly traded, infrastructure-related construction firms, ahead of the investment herd. Companies with clients at all government levels are your best bets.

Another way to profit from the coming building boom is by investing in copper miners. That’s right, copper. The experts at Investing Daily predict that the price of copper will soar in 2021 and beyond, which should lift the share prices of the best-situated copper producers.

Copper is a versatile raw material that’s crucial for building construction, power generation and industrial machinery. As infrastructure spending explodes, so will demand for the “red metal.” For details about our favorite investment play on copper, click here now.

John Persinos is the editorial director of Investing Daily. If you’d like to weigh in on the debate about inflation, you can reach John at: mailbag@investingdaily.com. To subscribe to his video channel, follow this link.