Don’t Get Too Caffeinated About SBUX

Shares of the world’s largest coffee shop operator Starbucks (NSDQ: SBUX) seem to need a triple shot of espresso, laced with adrenaline. The stock, once a darling of the go-go momentum crowd (I am a charter member), has been a volatile bet since the pandemic hit.

Notably, investors are beginning to worry about the trend at some Starbucks outlets toward unionization. Recently returned CEO Howard Schultz proclaimed that he’s not “anti-union,” but rather “pro-Starbucks and Starbucks culture.” However, he also noted that Starbucks did not get to be where it is by being unionized, which means that friction will likely be brewing at the company. And friction, of course, breeds uncertainty.

As I detail below, my favorite coffee chain currently faces several positive and negative factors.

I am a big fan of Peter Lynch’s “kicking the tires” method of investing, which means that I like to see how business is faring in a company in which I sink money. And I had a good opportunity to kick some tires when an Internet outage at my home took me to the nearest WiFi spot I could think of, my neighborhood Starbucks.

Since it was mid-morning, I thought I would see a busy drive-thru, but a nice quiet empty restaurant where I could comfortably sit and meet my deadline for Profit Catalyst Alert.

Instead, I got a big surprise. The drive-thru was snaking around the back of the shop, and for the first time in a really long time, I had a hard time finding a place to sit indoors. The baristas were hustling to keep up with orders.

My experience suggests that customers are coming back, which bodes well for the business over time. Still, not all is well in the short term.

A Bit of History on the Stock

As with everything else, the pandemic had a big effect on SBUX.

The stock, however, managed a nifty recovery after taking an initial hit during the early days of COVID, as the work from home crowd found a way to sneak out for a cup once in a while. And as the recovery from the pandemic began to gather steam, the stock boomed for most of 2020 and 2021. 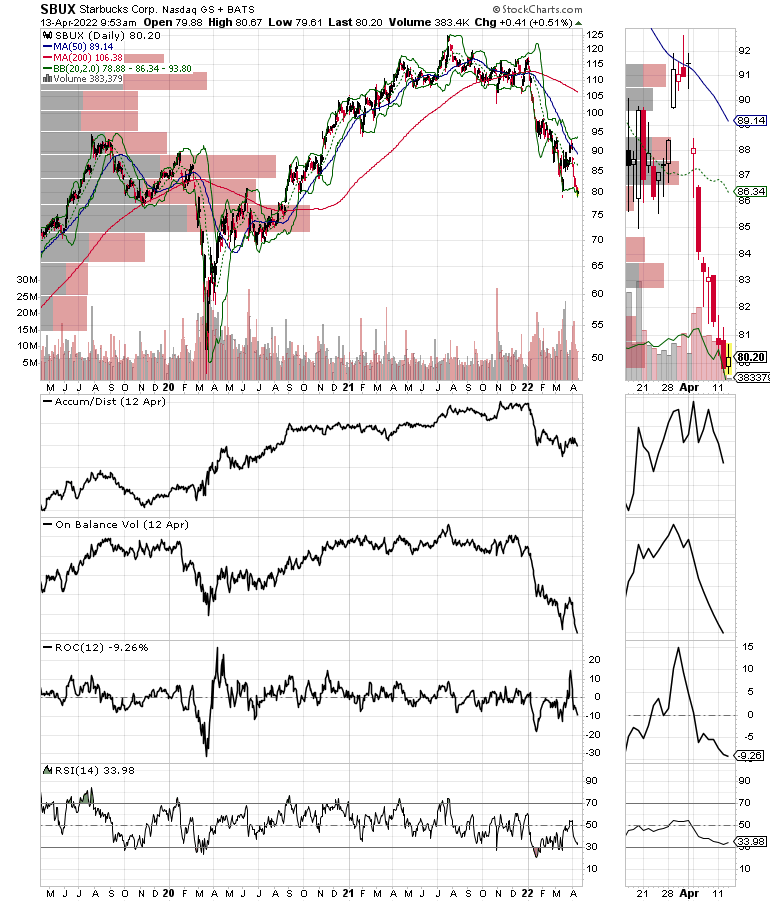 But in December 2021 the stock fell out of bed. The Omicron surge frightened investors into what at first seemed to be profit taking but morphed into and an unrelenting, get-me-out-of-here selling spree, which brought the stock to where it was in June 2020.

Certainly, the pandemic was influential in sending the stock lower. But perhaps the most compelling reason for the recent decline in the share price is a persistent slowing of sales.

SBUX was a guaranteed double-digit grower quarter after quarter in the past, and it delivered a nifty 19% growth rate in its most recent quarter along with record revenues of $8.1 billion. However, analysts are forecasting an anemic three-year growth rate of only 3% over the next three years.

That’s akin to the proverbial guy who had one too many cups of coffee and is now having an irregular heartbeat and feeling dizzy.

And reading the comments of retiring CEO Kevin Johnson in the company’s most recent earnings call, it’s not hard to see that the analysts may be correct in their slow earnings forecasts. Here are the low-lights:

On the other hand, Johnson was upbeat on growth rates and profitability in China just as the company continued its aggressive expansion there. This expansion, however, was implemented well before the latest Omicron surge in China and subsequent lockdowns there. Headwinds in China have accelerated the selling spree. The Russia-Ukraine war is another negative.

Schultz to the Rescue

Enter Howard Schultz, for his third run as CEO. The stock jumped nicely on the news of his return. And why not? The guy’s middle name should be Starbucks given the fact that he took a modest coffee chain and turned the brand into a global icon.

But Schultz is a bit of a contrarian, which means that what he says and does may not resonate with everyone, at least until he delivers positive results. Of course, given his past history with the company, it’s likely the odds are on his side.

And here’s what he’s done in his first month back at the helm:

Now, it doesn’t take a genius to see that his two initial management decisions are likely to cause some concern on the part of investors. Specifically, stock buybacks are well known to boost the price of a company’s shares. And if Schultz declares war on the union movement, it will cause operational issues which may affect revenues and earnings.

The price chart above is fairly easy to interpret. The stock is struggling to come off its recent bottom and the bloom is off the Schultz rose, as the bounce from the announcement of his return has already faded.

Investors should keep this in mind:

In the short term, it may be best to avoid the stock, as we wait to see how conditions pan out. In the meantime, I will continue to visit Starbucks, to kick the tires.

Editor’s Note: Market giving you the jitters? Consider the advice of our premium publication, Rapier’s Income Accelerator, helmed by our colleague Robert Rapier.

Robert Rapier’s trading service cranks out steady profits regardless of rising rates, hotter inflation, or the whims of the Federal Reserve. Anyone who adds Robert’s little-known strategy to their portfolio can enjoy more cash, more often, with less risk. Click here now for details.