When Will The Stock Market Hit Bottom?

When on long family car trips, the running gag among the Persinos clan is for the kids in the backseat to torment the adults with repeated refrains of: “Are we there yet?”

You could ask the same question of a stock market bottom: Are we there yet?

It’s risky to attempt the timing of a market bottom. Stocks could fall a lot further. However, it’s useful to get a general sense as to when the pain might start to ease. Below, I examine key indicators that can help you determine whether the market is about to turn around. I also show you a smart place to put your money now.

In pre-market futures contracts Friday, the main U.S. indices were trading sharply in the green. After the indiscriminate carnage we’ve seen this week, especially in the retail sector, it’s not surprising that many bargain hunters have decided that the market is oversold and ripe with opportunities. But some of these “bargains” could be in genuine distress.

In the often perverse logic of Wall Street, bullishness can be interpreted as bearish. For the suggestion of a bottom, we’d first need to see market capitulation. This term indicates the point when investors have surrendered, i.e. given up on trying to recapture lost gains. It means just about everyone who is inclined (or forced) to sell has done so, leaving only buyers, who in turn drive prices back up.

One indicator useful in determining a turning point is the CBOE Volatility Index (VIX). By tracking a basket of options based on the S&P 500 index, the VIX measures the implied volatility of the S&P 500 over the subsequent 30-day period.

Traders watch the VIX for signs of complacency during the market’s bullish periods and signs of extreme anxiety during bearish periods.

As of this writing on Friday, the VIX hovers at 28. VIX readings greater than 30 generally indicate uncertainty and fear; readings below 20 reflect stability and calm. As it currently stands, the VIX isn’t giving us a strong signal that the market bottom has been breached.

Another reliable indicator (one favored by contrarians) is investor sentiment. Complacency is a sign that the market has peaked; pervasive pessimism points to market bottoms. The following chart shows the evolution of bearish sentiment over the past year: 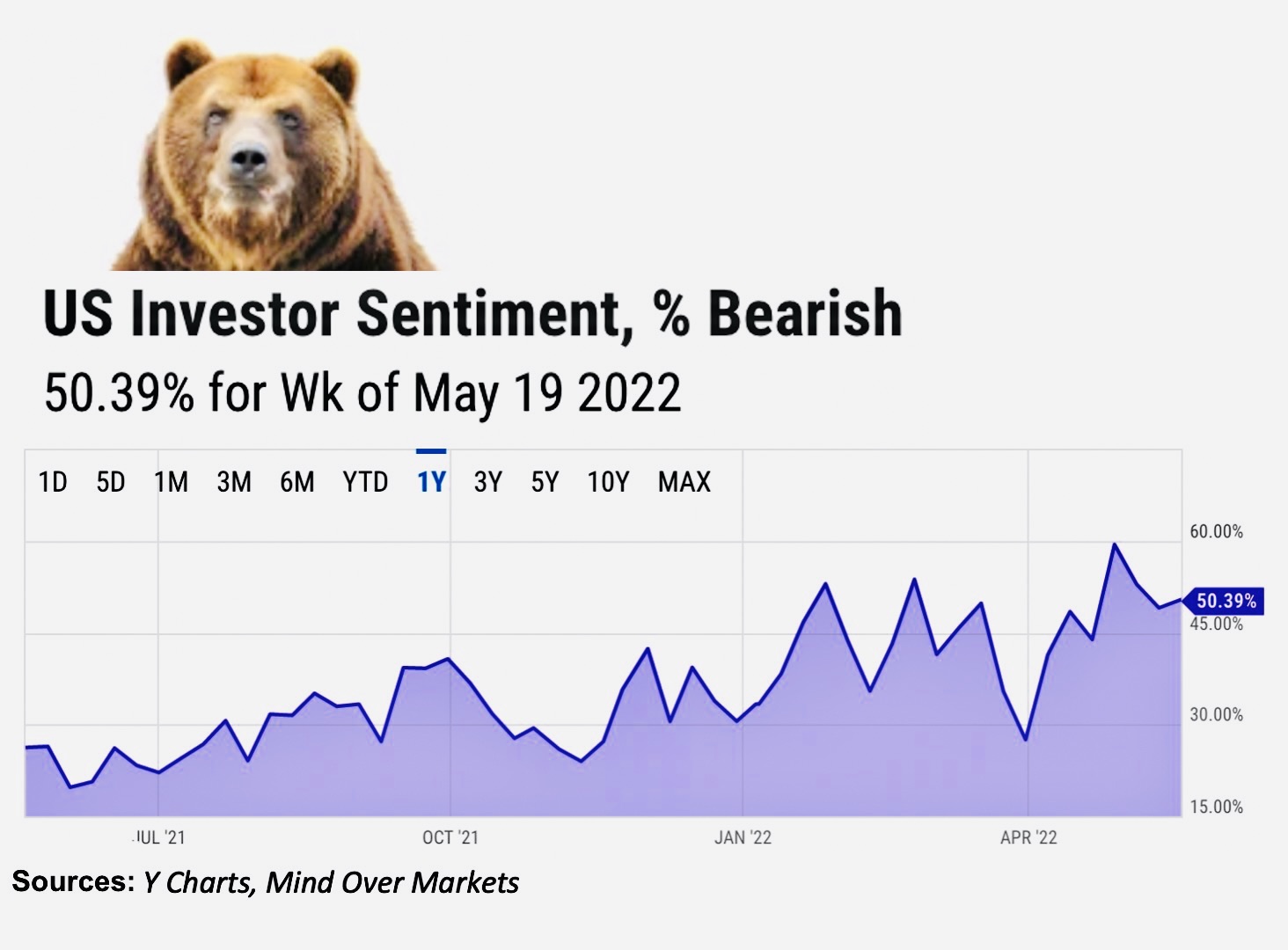 Yes, bearish sentiment is rising, but it hasn’t gotten so high as to suggest an imminent turn around. What’s more, about one-fourth of S&P 500 stocks trade above their 200-day moving average, which doesn’t reflect full-blown panic and capitulation.

At some point, sentiment will get so bearish, it will be a bullish sign. But we’re not there yet. Instead of trying to time the bottom, you should stay invested and stick to your strategic goals through a complete market cycle.

You don’t have to sit on the sidelines. Despite the risks I’ve just described, where can you still find solid growth opportunities? I can sum it up with a single word: takeovers. When a takeover is triggered, the profits that spill out have life-changing potential.

In this era of war, inflation and pandemic, corporate consolidation is the name of the game. Even the whisper of a “mega-merger” can hand investors enormous returns.

My colleague Nathan Slaughter, chief investment strategist of Takeover Trader, just pinpointed a takeover deal that could dwarf them all. Want to get in on Nathan’s next big trade? Click here for details.