Growth at Bargain Prices: Come and Get It

Remember Badfinger, the rock band? While I was writing this article, the refrain of their 1969 hit song Come and Get It popped into my head: If you want it, here it is, come and get it, but you’d better hurry ’cause it’s goin’ fast.

Below, I examine why now’s a good time to incrementally build positions in beaten down but solid growth stocks. Recent sell-offs have generated exceptional bargains…but you’d better hurry, before they get bid sky-high again.

Despite the pummeling stocks have taken so far this year, corporate earnings growth continues to provide justification for bullishness.

For the first quarter of 2022, with 97% of S&P 500 companies reporting actual results (as of May 31), 77% of S&P 500 companies have reported a positive earnings per share (EPS) surprise and 73% have reported a positive revenue surprise, according to research firm FactSet. For Q1 2022, the blended earnings growth rate for the S&P 500 is 9.2%. “Blended” combines actual with projected earnings.

Air has been released from the asset bubble. The forward 12-month price-to-earnings (P/E) ratio for the S&P 500 is 17.1, which is below the five-year average of 18.6. Many appealing stocks that had been trading at frothy levels are bargains again. But instead of indiscriminately piling into stocks, in hopes of a general stock market rebound, you should pick your spots.

The broader market’s swoon might not be over, but for the time being, stocks seem to have stabilized. After seven consecutive weeks of declines (the longest losing streak since 2001), stocks sharply rebounded last week. Last Friday, the S&P 500 posted a weekly gain of 6.6%.

Putting a floor under stocks has been the resilience of the American shopper. Consumer spending climbed in April at its fastest pace in three months, buttressed by solid job growth and accumulated household savings.

The gloomsters in the pundit class are warning that the Federal Reserve will tighten monetary policy to the point where the economy is pushed into recession. What’s more likely, in my view, is that inflation will soon ease (we’re already seeing signs), prompting the Fed to be less hawkish than feared. Two outsized rate hikes are planned for June and July. If those hikes are followed by a dovish pivot, we could see the next big upward leg in stocks.

To be sure, we’re still not out the woods. Serious risks, e.g., rising inflation, supply chain woes, and the Russia-Ukraine war, continue to worry corporate leaders. The following chart is based on FactSet’s survey of transcripts of all the S&P 500 companies that conducted earnings conference calls from March 15 through May 27: 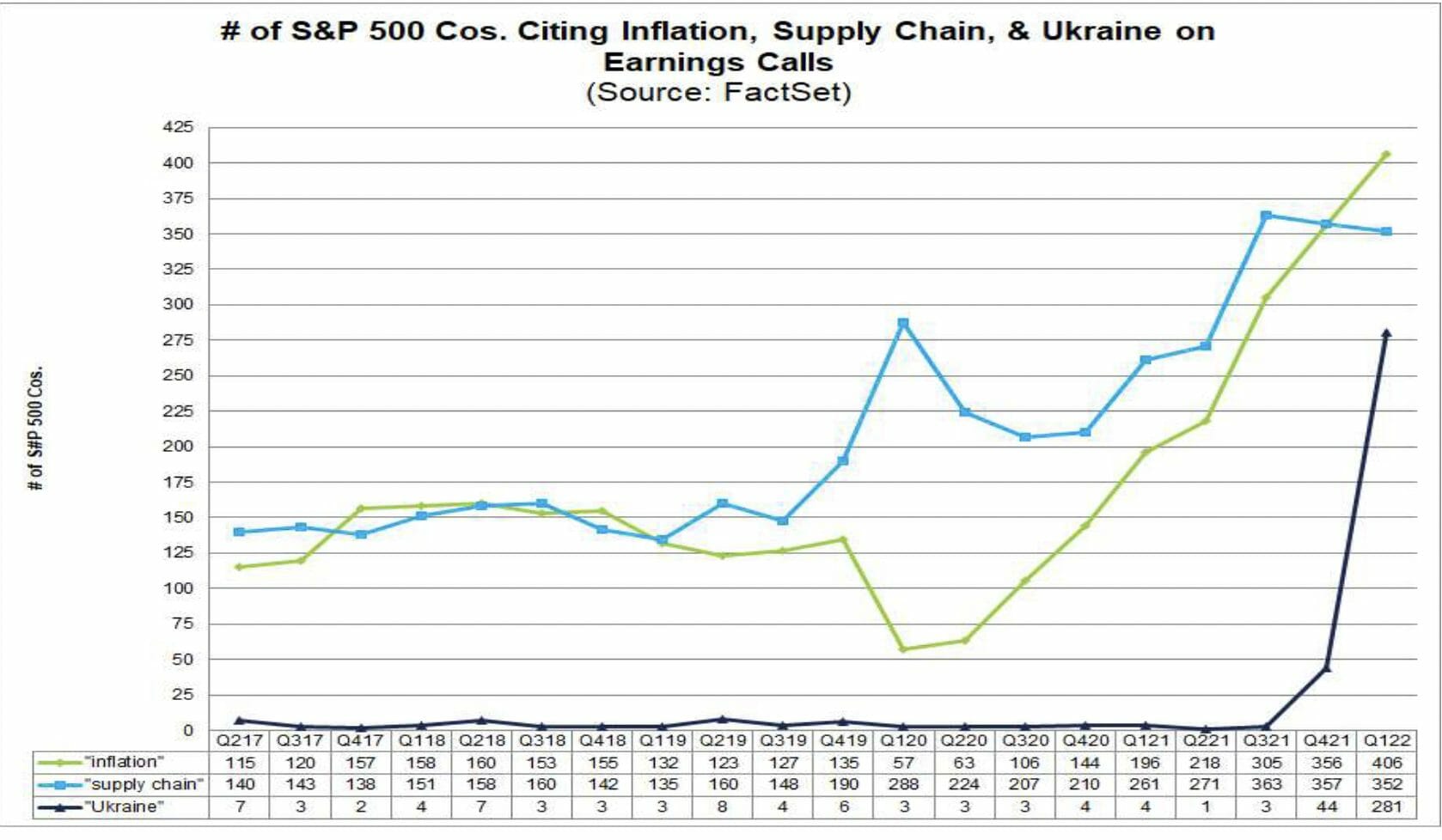 At the sector level, industrials (48), information technology (45), and financials (43) represented the highest number of companies that cited “Ukraine” on earnings calls for Q1.

That said, many stocks that represent multiyear mega-trends have become affordable. When current risks ease, these stocks should soar to new heights. Over the long term, underlying fundamentals tend to triumph over ephemeral bad news. For example, the conflict in Ukraine is a quagmire, but Russia’s economy can only withstand sanctions for so long. A negotiated settlement of the war would be rocket fuel for the equity markets.

The EV industry is making a lot of news, as automakers of all sizes embrace the technology and governments around the world rush to subsidize its development. Environmentalists view the industry as a green counterbalance to global warming. Investors see a tech disruption with enormous room for profitable growth.

The EV phenomenon is one of the biggest investment opportunities you’ll see in your lifetime. But you need to look beyond the obvious choices, such as Tesla (NSDQ: TSLA). As I just advised, you must pick your spots…and look for value.

Our investment team has just uncovered the first “Apple” of the EV industry. One game-changing company is stealthily siphoning the EV industry’s trillion-dollar profits into investor accounts over and over again, like clockwork.

Now’s the time to buy this under-valued stock, before the investment herd catches on and drives up its price. Click here for details.