Fear of inflation continues to weigh on the markets. In an ideal world, inflation protection can do two things: 1) preserve wealth and 2) enhance wealth.

In the middle of the 1970s, during the worst bouts of inflation, many investors had no choice but to pay a high premium for inflation protection or wealth preservation, with no expectation of wealth enhancement.

You don’t have to settle for that dreary trade-off. Below, I’ll steer you towards a method of inflation protection that also conveys growth. In the meantime, the U.S. equities markets finished last week in the red, with the S&P 500 down 5.1%.

The rout in cryptocurrencies has deepened, as investors flee “risk-on” investments. The grandfather of crypto, Bitcoin (BTC), is currently down more than 49% year-to-date. So much for crypto as a supposed “inflation hedge.”

In pre-market futures trading Tuesday, U.S. stocks were mixed, with the Dow attempting a rebound.

On Tuesday morning, the U.S. Bureau of Labor Statistics (BLS) released the producer price index (PPI) for May. The numbers weren’t pretty.

The producer price index, a gauge of the prices paid to producers of goods and services, climbed 0.8% for the month and 10.8% over the past 12 months. The monthly rise was in line with consensus estimates and a doubling of the 0.4% pace in April.

Excluding food, energy and trade, the core PPI rose 0.5% on the month, slightly below the 0.6% estimate but an increase from the 0.4% reading in the previous month. On a year-over-year basis, the core measure was up 6.8%, matching April’s increase.

Amid higher global inflation. international equities have been tumbling as well. The iShares MSCI EAFE ETF (EFA) last week posted a -4.7% loss. The EFA seeks to track the investment results of large- and mid-capitalization developed market equities, excluding the U.S. and Canada. European stocks were trading higher Tuesday, as they tried to rebound from Monday’s selloffs.

The Federal Reserve began its two-day meeting Tuesday, with growing calls from Wall Street for an 0.75% rate hike to quell raging inflation.

The Russia-Ukraine war and its disruption of Europe’s fuel supply is raising fresh concerns about the Continent’s economy. Tough Western sanctions are causing sky-high energy prices and shortages throughout the European Union.

However, at least for the U.S., a recession isn’t necessarily in the near-term cards. The U.S. market’s decline so far this year already has priced in considerably negative sentiment about the future of the American economy. I contend that the economy is stronger than the pessimistic consensus, which only enhances potential upside.

Read This Story: How to Keep a Cool Head Over Hot CPI Data

One of the few glimmers of hope in the consumer price index (CPI) report for May is the modest decline in core inflation, from 6.2% to 6.0% year-over-year.

The gap between headline and core data…

Yes, inflation is running hot, but headline and core inflation are posting an ever-greater divergence. The latter is gradually easing, a good sign for future headline inflation reports (see chart). 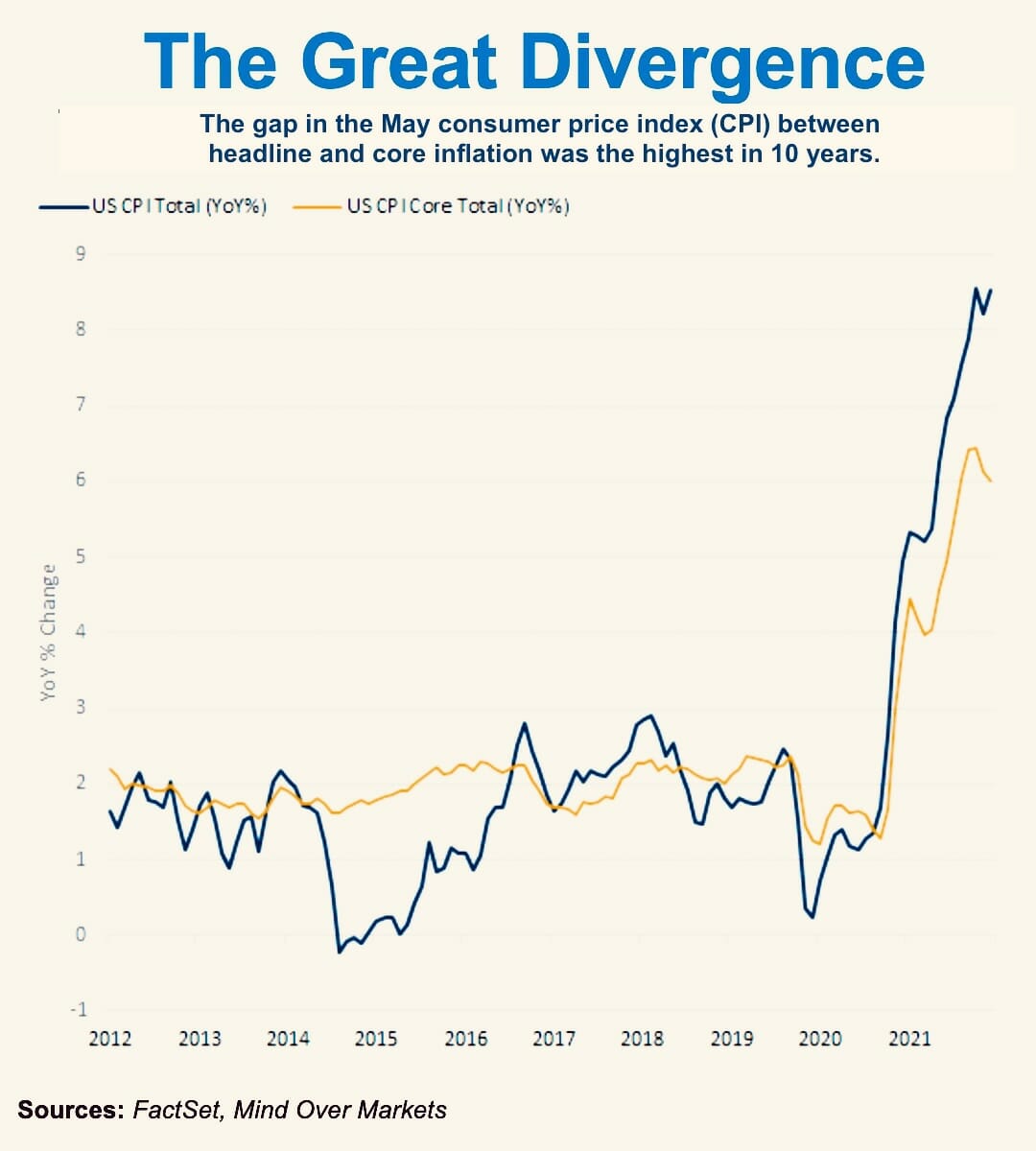 The U.S. economy started 2022 in strong shape, with a resilient consumer, recovering employment market, and robust corporate earnings and balance sheets. These positives remain in place, which should cushion the blows from Federal Reserve tightening.

The Fed has signaled 0.50% rate hikes for its June and July meetings, and May’s hot inflation data boosts the chances of a 0.50% rate hike in September. Mega-cap tech stocks have been getting slammed; rising rates hurt growth more than value.

It’s not too late…

Within the context I’ve just described, it’s obvious that Investors should be inflation proofing their portfolios, and they should be doing so before such protection becomes prohibitively expensive. It’s still not too late.

The most critical principle to consider when creating an inflation protection strategy is your risk tolerance, which is usually defined by how close you are to retirement.

The rule of thumb is, the closer you are to retirement, the more inflation protection you should have.

Investors that are hedged against inflation are in a much better position to survive it. That’s why you need the advice provided by our premium trading service the Weekly Cash Machine, helmed by my colleague, Dr. Joe Duarte.

Dr. Duarte’s inflation-proof income summit is “on air” now. You don’t want to miss his latest investment insights. He’ll show you, step-by-step, how to make money while simultaneously keeping inflation at bay. Click here to secure your spot.