“The American Indian is of the soil, whether it be the region of forests, plains, pueblos, or mesas. He fits into the landscape, for the hand that fashioned the continent also fashioned the man for his surroundings. He once grew as naturally as the wild sunflowers, he belongs just as the buffalo belonged.” – Luther Standing Bear, Oglala Sioux Chief

For many Native Americans, those sentiments apply to a natural herb known as marijuana. In recent days, the issue of tribal sovereignty has further complicated nationwide pot legalization.

The Senate Indian Affairs Committee met on June 17 in a session called “Cannabis in Indian Country,” which discussed cannabis in the context of tribal sovereignty. The meeting served as an opportunity for tribal leaders to share their frustrations about the federal ban on pot.

In March 2022, nine senators joined together in a letter to Attorney General Merrick Garland urging him to prevent the Controlled Substances Act to be carried out on tribal land. The letter urged the attorney general to “reinstate prosecutorial discretion and allow U.S. Attorneys to deprioritize cannabis enforcement where states and tribes have legalized cannabis.”

The following is a snapshot of marijuana laws as they currently pertain to tribes: 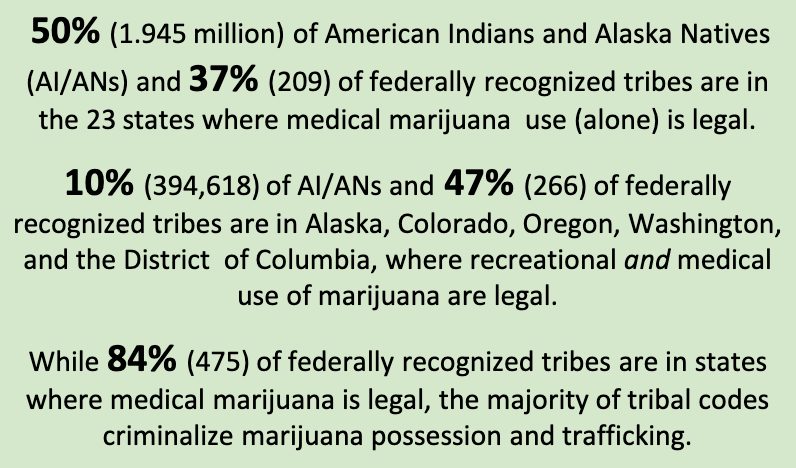 States differ in their approach to tribal sovereignty and marijuana. The federal government announced in 2014 that Native American tribes are free to legalize, cultivate, manufacture, and distribute cannabis on tribal lands without federal intervention. Many tribes have decided to do so.

The Department of Justice (DoJ) no longer prosecutes federal laws regulating the growing or selling of marijuana on reservations, even when state law bans the drug. But DoJ will enforce those federal laws, if requested by a tribe.

New Mexico, for example, has a strong history of cooperation between the state’s taxation division and the states tribal communities, who are permitted to make their own laws but are subject to regular taxation.

Other states, such as Washington, permit tribes to make their own laws and govern their own methods of taxation for cannabis.

Tribal sovereignty is somewhat similar to the immunity granted to religious institutions that use cannabis or other plant-derived medicines in the context of their spiritual beliefs and rituals. Tribes are now seeking clarity and uniformity for marijuana laws in their jurisdictions.

The U.S. State Department’s latest annual Report on International Religious Freedom focuses on the relationship among religion, cannabis, and law in other countries.

The international report examined the rights of those who practice Rastafarianism in Jamaica and throughout the Caribbean.

The report noted that Jamaica, Antigua, and Barbuda protect the rights of Rastafarians and Hindus when it comes to psychotropic substances. Rastafarianism, the religious movement that was developed by Black Jamaicans in the 1930s, typically forbids meat-eating, alcohol-drinking, and hair-cutting, but promotes the use of cannabis for spiritual purposes as part of their religious doctrine.

Hinduism includes the drinking of bhang, a drink that contains cannabis. Bhang is considered by adherents to aid in spiritual cleansing, and to protect from the fires of hell.

In terms of the permissibility of marijuana use in this country, the focus is less on religious freedom, and more on government oversight of its production and use. U.S. courts have continuously refused to validate cases arguing that religious exemptions should be made in the United States.

White House Drug Czar Raul Gupta, who leads the Office of National Drug Control Policy, recently stated that President Biden is attempting to address marijuana policies in a holistic fashion that takes into account such factors as religious practices and tribal laws.

The White House also is considering the normalization of marijuana laws as a way to reduce addictions to harmful substances, such as alcohol, nicotine, and opioids.

Gupta said that “for the first time in history, the federal government is embracing the specific policies of harm reduction.”

The Department of Justice last week announced that it’s set to re-examine cannabis laws in “the days ahead.” Dozens of Congressional members are giving bipartisan support to push protections for tribal use of cannabis.

Read This Story: How to Pick The Best Pot Stocks

Marijuana is among the hottest growth opportunities that you’ll see in your lifetime. If you pick the right pot stock, you could reap stupendous gains. But that’s the key: picking the right stock.

That’s why I urge you to read my new book: The Wide World of Weed and Psychedelics. It’s your definitive guide for making money in the thriving cannabis and psychedelics industries.

Inside the pages of my book, I reveal the stunning facts behind the world of legal marijuana and psychedelics, including the countless ways they could alter the very fabric of society, for generations to come. Click here to get your free copy.