Can Stealth Growth in the Sunbelt Save the U.S. Economy?

The Federal Reserve’s on a mission, it says, to quell inflation. So far all it’s done is to crush the stock market.

The Fed’s actions have not registered as widely in the sunbelt where the housing and commercial building sectors continue to hum keeping the economy in a steady growth tract. This is in contrast to the economic activity in other areas of the U.S, where economic activity has slowed, contributing to two consecutive quarters of negative GDP growth and perhaps a third one.

Indeed, much of the resilience of the sunbelt seems to be related to the acceleration of the secular migration from high tax, high regulation states which is transforming all aspects of the business and population landscape in the south.

So, the real question is whether the Fed’s moves will eventually hit this powerful growth dynamic. To me it seems as if the odds favor the south, at least for now.

Complex systems function and adjust as the result of the interaction of its agents (components) with the environment. Think of the agents as a bunch of molecules and the environment as a box with a hole at the top and one at the bottom. Investors are agents and the Fed is an also agent. The box is the economy.

The area surrounding the holes in the box is where Chaos and Complexity are in balance, this is known as the Edge of Chaos, where the system is charged up and where big changes occur, leading to emergence – escape through the hole.

The agents searching for complexity are looking for ways to get through the hole at the top – the point of emergence – to a new, presumably higher level of function. This happens when times are good and the agents are looking for even better times.

When enough agents find that hole, the rest of them follow en masse. When Chaos is in control, panic ensues and the agents fall through the bottom hole just looking to survive.

At the moment, the Fed has stirred up the Edge of Chaos, and the complex system known as the stock market is showing signs of a negative emergence into Chaos. There are two ways out of the box.

In the stock market we’ve seen panic selling as traders fret about future earnings and higher interest rates. Agents are escaping through the bottom hole – out of stocks.

In the real world, the agents, including Wall Street’s big houses (see below) are voting with their feet and are racing to the top hole – the sunbelt.

The Big Short in Reverse

The turning point for me in “The Big Short” was when Eisman sent his traders to Florida to look at the state of housing in the state. At that time, subprime mortgage issuance was out of control and the Wall Street sales machine was selling the soon to crash credit default obligations (CDOs – income producing securities backed by mortgage payments).

When the traders got to Florida, they saw huge swaths of empty houses, which they correctly surmised were about to default on their mortgage payments, since the mortgages were based on sham sales. The rest, of course, is history, as Eisman and others bet against the CDOs and made billions when the market collapsed.

I could be wrong, but what I’m seeing on a daily basis strikes me as being a reverse of what happened in the big short.

A Tale of Two Realities

There are two realities; the cyber world and the real world. Stock trading is mostly done by robots in the cyber world. They don’t get out of their servers – yet – and go out to kick the tires.

People, on the other hand, can travel or talk to family members or friends who tell them that things aren’t so bad in the south; that there are jobs and some opportunities left despite inflation and other pressing regional issues.

Just a few miles from where I live, and where I unfortunately have to drive by in order to go to work, a new 45-acre multi-dimensional development called Southstone Yards is now well on its way to being accessible.

The land has been cleared. The streets have been laid out. The water and sewage pipes are going in. And the traffic in the area is well snarled.

I don’t see any signs that this is stopping anytime soon. In fact, it’s picking up steam.

Aside from the office buildings, there are going to be over 1000 apartments and townhomes built around a park and with access to shops, restaurants, and for many a short walk to their job.

Unless something really bad happens, I expect this development to be successful over the next several years.

A big beneficiary of this project will be Florida based homebuilder Lennar (NYSE: LEN). Full disclosure, I have had a position in LEN in my private trading account for several years. Note how the shares have been building a base over the last few months even as stock prices have been falling. 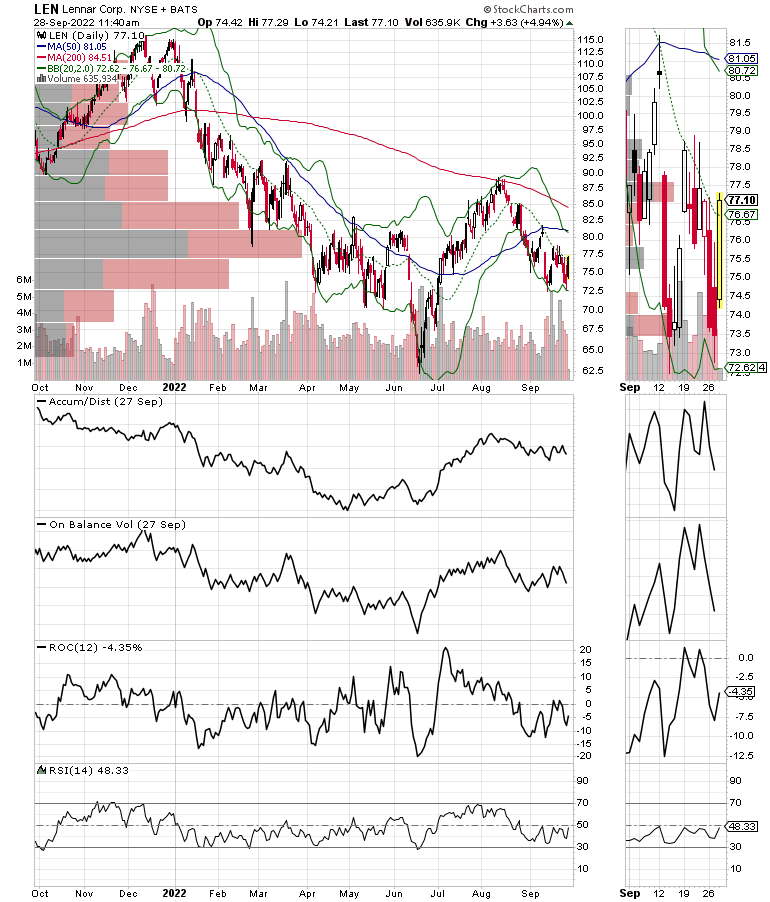 A few miles down the road is The Star Complex owned by Dallas Cowboy owner Jerry Jones which continues to attract businesses to the area.

Finally, just a few blocks south of The Star is the Legacy West area where JPMorgan Chase (NYSE: JPM) has its Texas base.

So, who’s going to fill these buildings, apartments and townhomes?

The list of companies moving to DFW continues to grow. But here is a small sampling of what’s already happened over the last few years:

And the list will likely continue to expand as the number of out of state license plates I see every day is exploding. It’s no accident that JP Morgan and Goldman Sachs are moving south. Big trading house Citadel moved to Florida from Chicago recently. I expect Morgan Stanley will follow.

Across I-35, in the Fort Worth area, Toll Brothers (NYSE: TOL) is building nearly 1000 luxury apartments. Meanwhile, Green Brick Partners (NSDQ: GRBK), a Plano, Texas based home builder featured in my premium publication, Profit Catalyst Alert (PCA) is in the midst of building nearly 2000 homes in the far north reaches of the Dallas Fort Worth (DFW) metroplex known as Princeton.

Incidentally, Princeton is within reasonable driving distance from the new Texas Instruments (NYSE: TXN) semiconductor plant which will be operational by 2023 which is expected to employ 3000.

It’s hard to see this dynamic growth come to an end anytime soon, unless the Fed just nukes everything, everywhere, all at once, and for good. In other words, just as Eisman’s traders saw the truth about the subprime mortgage crisis, I marvel at what I’m seeing on a daily basis in the real world, and wonder what the robot trader are doing on Wall Street.

It just doesn’t add up. And more people are waking up to this every day, including big robot trading houses like Goldman Sachs and JPMorgan.

Trade What You See

Of course, I’m not about to triple mortgage my house and buy homebuilder stocks on margin. And thanks to the Fed or just about anything else that is unfolding at the moment, things could easily go bust in a hurry.

On the other hand, aside from waiting until a Goldman Sachs transplant offers me a ridiculous bundle for my house, which I will probably take, I am occasionally buying a few shares of a few homebuilders when prices dip.

The easy way to own the sector it is via the SPDR Homebuilders ETF (XHB). This ETF has a well-diversified portfolio of homebuilders, home building materials, and related companies whose current businesses are often in better shape than what the Wall Street bots are betting on. 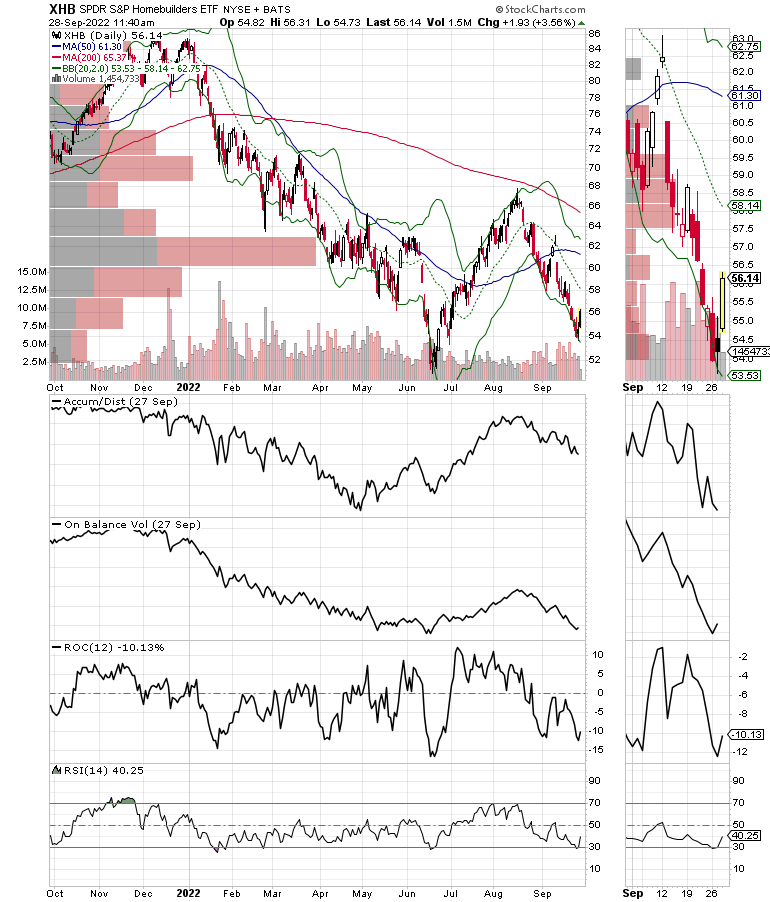 Moreover, I remain patient as in the light of Sun Belt I see a totally different world unfold in front of my eyes than what is being traded on a regular basis by digital sensors and strings of code sitting in a cold room in a basement in Weehawken, New Jersey.

Can the stealth growth in the sunbelt save the U.S. economy? I hope so. But in the end, only the Fed knows.

I own shares in GRBK and LEN. I trade shares of XHB in my private account and do not own any as of this writing.

As our income expert, Robert has devised a new investment formula that could hand you the retirement freedom you’ve always dreamed of, even in these tumultuous times.