This Thanksgiving Week, There’s a Lot for Investors to Digest

The barrage of economic reports scheduled for release this holiday-shortened week will give investors plenty to digest with their Thanksgiving turkey. Wednesday will be the most eventful day, as follows:

The most important information will be the inside look at the deliberations of the FOMC at its most recent meeting November 1-2, when it hiked interest rates by another 0.75% (75 basis points).

Last week, St. Louis Federal Reserve President James Bullard dispirited investors by stating: “Thus far, the change in the monetary policy stance appears to have had only limited effects on observed inflation, but market pricing suggests disinflation is expected in 2023.”

Investor sentiment has been whipsawed all year by Fed policy and pronouncements. Last week was no exception, as the following chart shows: 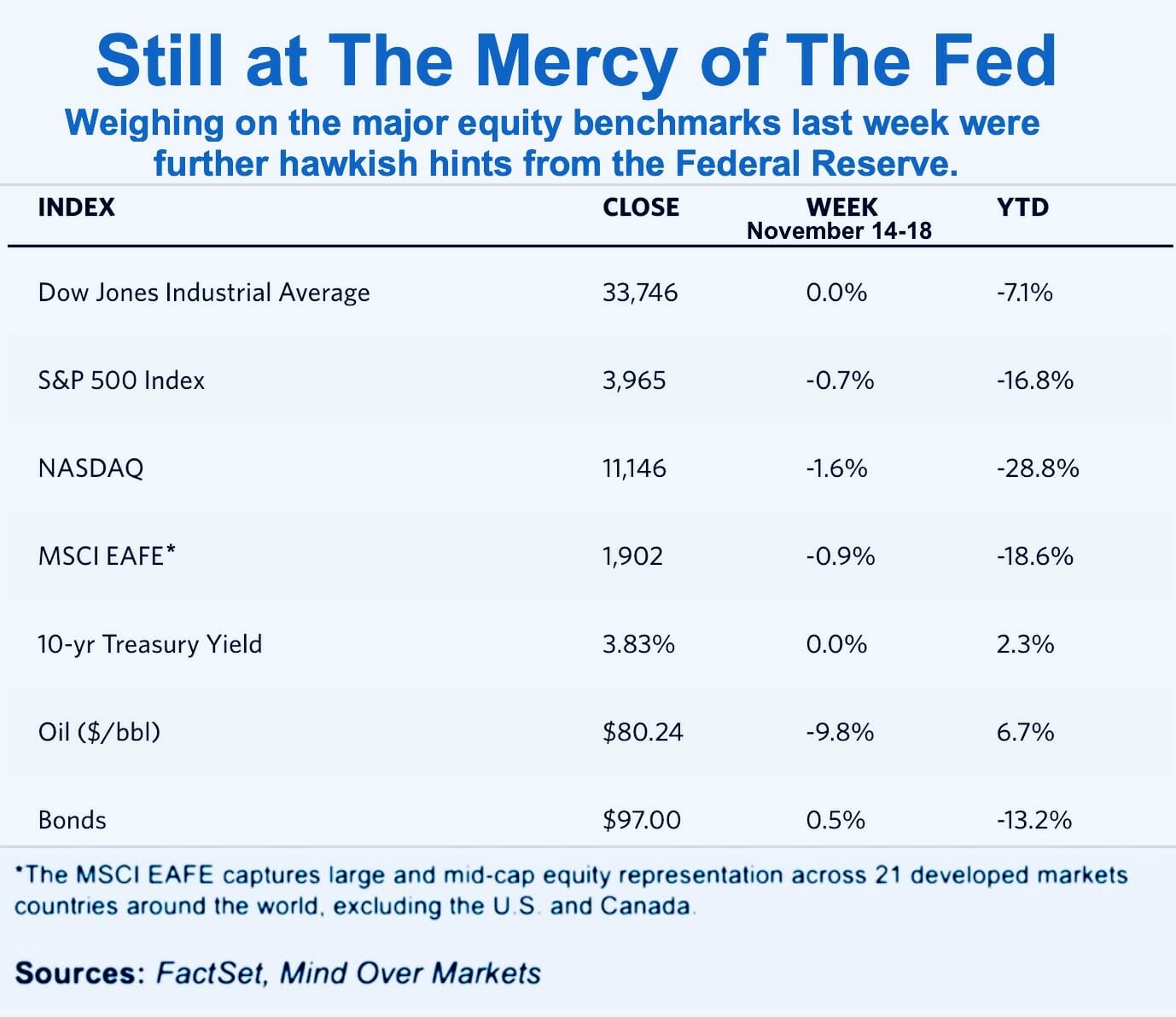 That said, I continue to think that we’ve already weathered most of the potential downside in equities and bonds. We’ll probably see further bumps in the road, but I’m also confident that there’s significant upside for equities and longer-term fixed income in the new year ahead.

Read This Story: The Fed’s at The Wheel…and That’s The Problem

U.S. inflation has been cooling, but the Fed remains reluctant to declare victory. Bullard’s comments argue against expectations for a more dovish stance when the central bank meets again December 13-14.

In the past, Fed chairs have been tight-lipped about the direction of the Fed’s interest rate policy, obscuring their intent with technical jargon. Although investors attempted to divine the Fed’s approach to interest rate policy in advance of each FOMC meeting, their efforts were merely guesswork.

As such, the Fed now offers press conferences after each FOMC meeting and an almost unprecedented level of transparency regarding its economic outlook and intentions.

All of which brings to mind an acronym that’s popular with the kids in our family: TMI (too much information). During this tightening cycle, when Fed officials speak to the press, investors invariably get jittery.

We’re probably nearing the end of the Fed’s rate increases, but until a dovish pivot actually happens, markets will remain on edge. The central bank’s “higher-for-longer” stance dominates the narrative.

Helping the inflation fight has been the recent decline in crude oil prices, with the U.S. benchmark West Texas Intermediate falling to the $80 per barrel level. China’s sputtering economy due to COVID lockdowns and the country’s concomitant reduction of oil imports have been disinflationary factors.

For the S&P 500 as a whole, third-quarter 2022 earnings have been generally positive, albeit lackluster and punctuated by a few big misses.

Operating results from the retail sector have reflected consumer resilience, despite the dismal report card of big-box chain Target (NYSE: TGT), an erstwhile high-flying stock that’s currently in a severe slump. Target has been aggressively discounting bloated inventories, which is squeezing profit margins.

Consumers continue to keep their wallets open, but the holiday season is likely to be soft and marked by decelerating discretionary spending. Consumers haven’t retreated, but inflation and recession fears have made them more cost conscious. Walmart (NYSE: WMT) last week boosted its annual sales and earnings forecasts, largely due to strong demand for its bargain-priced groceries.

We’ll get a better idea of consumer sentiment on Wednesday, when the University of Michigan releases its closely followed reports.

In the meantime…how can you hedge your portfolio against the risks I’ve just described, and still enhance gains? Consider the advice of my colleague Jim Fink.