One of my favorite investment rules is to always follow the money. And given that the year 2022 has been one most investors would like to forget, I’m taking a wide lens to look at areas of the stock market worthy of scrutiny as the new year approaches.

Certainly 2023 promises to be another uncertain year given the two major macro issues of the moment: the war in Ukraine and the Federal Reserve’s interest rate increases. But as they say, there’s always a bull market somewhere. And that calls for a more granular look at the market based on individual sectors.

I’m acknowledging the macro situation, but I’m more interested in the answer to these three questions as they pertain to individual areas of the stock market:

Is Gold About to Shine?

I’m not a gold bug. Truth be told, I’ve seldom traded gold. That said, I’ve been watching this sector carefully lately, and its price action merits inclusion in this list. 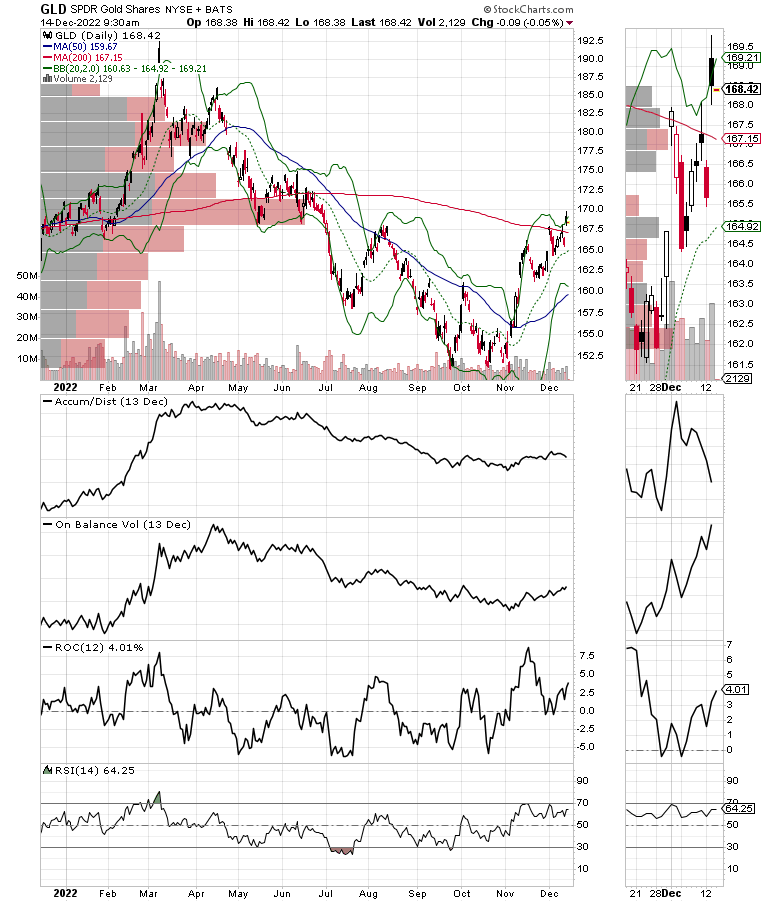 As you can see by the price chart of the SPDR Gold Shares ETF (NYSE: GLD), a credible proxy for the price of actual gold, the precious metal made a bottom in the months of October and November and is now testing the resistance of its 200-day moving average.

The classic explanation is that inflation is raging and gold is an inflation hedge. But inflation was raging throughout 2022 and GLD’s price was falling. What gives?

Well, there are reports that central banks have been buying gold of late. In fact, China has openly admitted to being a big buyer. All of which suggests that governments may be concerned about the currency markets.

That’s worth keeping an eye on for sure.

Money is moving into gold just as Bitcoin (BTC) has been crashing all year. Just about everyone has heard of the FTX scandal and there are rumors that other crypto exchanges/hedge funds may also be facing problems in the not too distant future. The news will be fluid on this story for a long time. 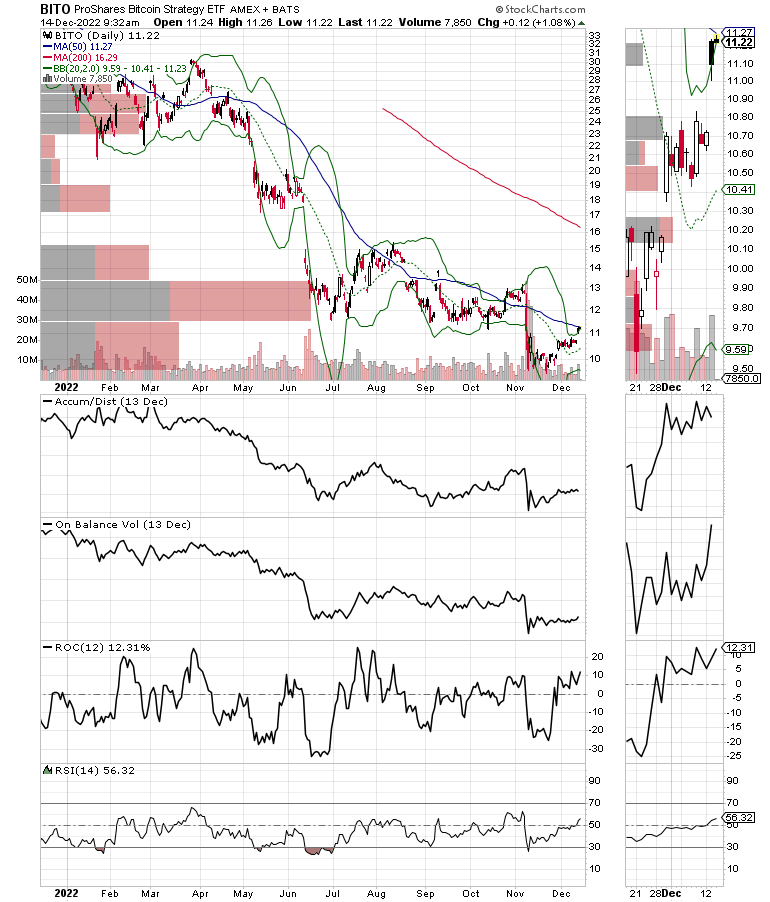 The price chart for the ProShares Bitcoin Strategy ETF (BITO) documents the dismal year this asset class has witnessed in 2023. However, it’s interesting to note that cryptocurrencies have been described as possible replacements not just for traditional currencies, but also for gold. Recent action suggests that some money is tricking back into the crypto space.

What Happened to the Rally in Natural Gas?

Cold weather is finally here, both in the U.S. and in Europe. The widely held view this summer was that due to the war in Ukraine, Europe would face major shortages in natural gas. These shortages would boost prices in both Europe and the U.S. The increases in the U.S. would be due to U.S. supplies shrinking as the fuel got diverted to liquified natural gas conversion, which would then be shipped to Europe, decreasing the supply available in the U.S. 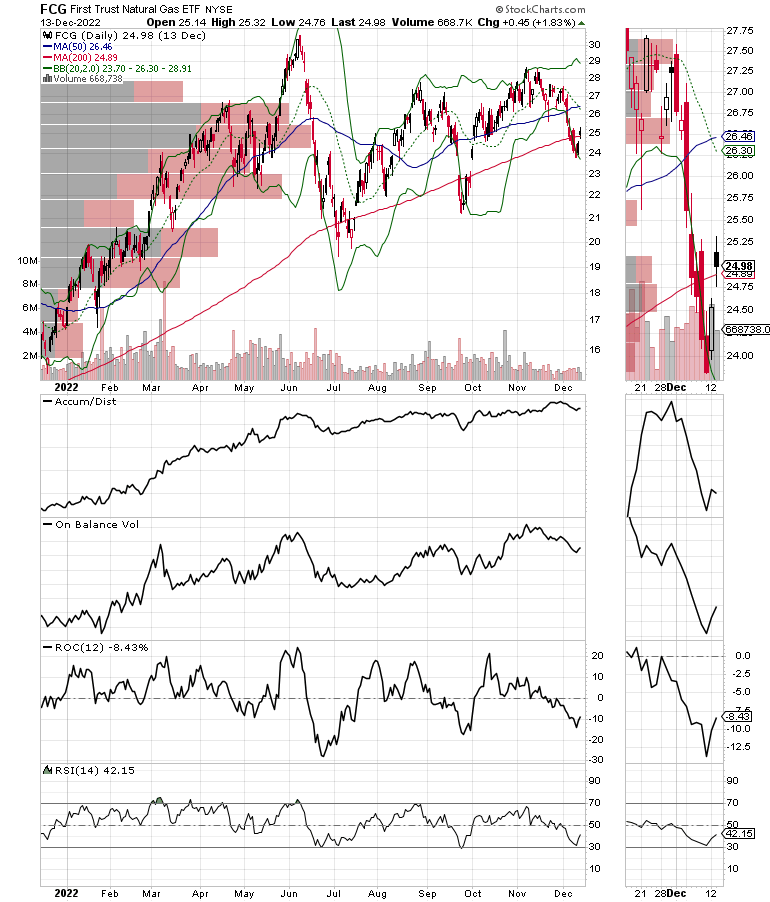 The price chart for the First Trust Natural Gas ETF (FCG) suggests that investors are deciphering whether the above described conditions are about to be fulfilled.

The next few weeks in natural gas are likely to be interesting. And as winter cools further, this sector may be worth a trade.

Is a Tech Rebound in the Works?

Since the 1980s, the most profitable sector in the stock market has been technology. And why not? The advances in hardware, software, IT, and network technology, all connected by the Internet, created a money-making juggernaut.

This changed with the COVID pandemic and the supply chain issues that ensued, and the technology sector tumbled. The Fed’s rate hikes added to tech’s misery early in 2022. 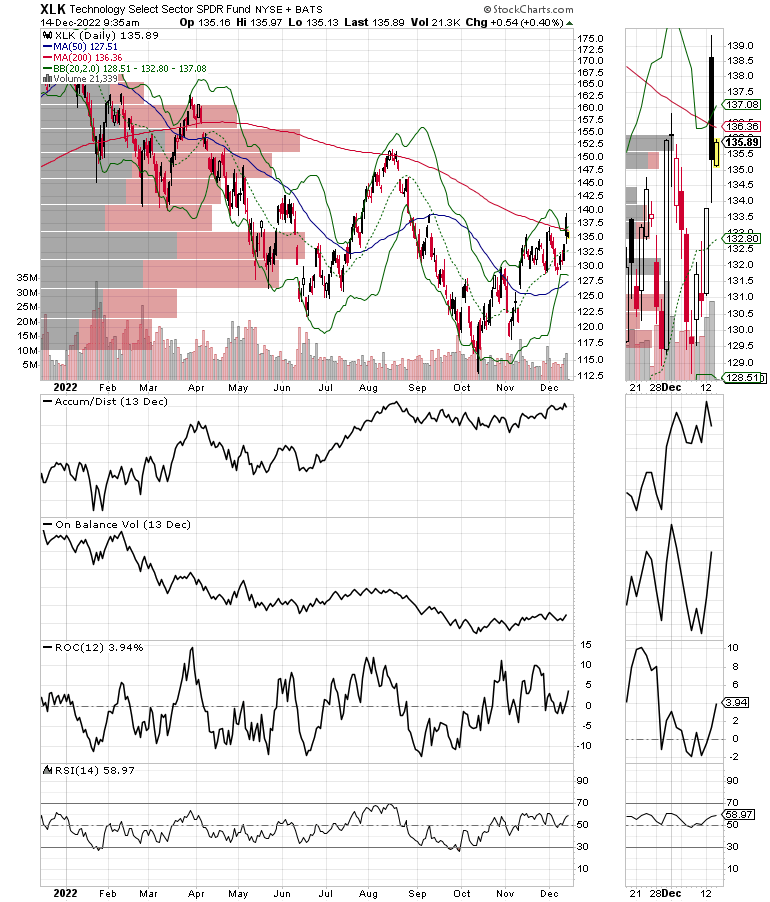 Be that as it may, as the price chart for the Technology Select Sector SPDR Fund (XLK) shows, tech stocks bottomed in the October-November time frame. A close look at the industry also reveals that major adjustments are ongoing with sector leaders such as Texas Instruments (NSDQ: TXN), Taiwan Semiconductor (NYSE: TSM), and others moving manufacturing capacity from abroad to the U.S.

In other words, the sector is adjusting its supply chain and logistics to adapt to the changing geopolitical situation. Value investors are starting to move in.

I’m liking what I see here.

I saved my favorite sector for last, the homebuilders. That’s because, even though these companies are at the top of every bearish forecast in the land, the homebuilders continue to deliver credible earnings even during these hard times. In addition, their shares seem to have bottomed.

It helps to divide housing into two distinct areas, existing homes and new homes. It’s the latter which I will focus on here, since the homebuilder and related sub-sectors, such as building materials are involved.

Both existing homes and new homes, however, are connected by the lack of supply in most markets. At the same time, it’s important to reiterate that there is an ongoing migration to the sunbelt states from high tax, high unemployment states. Supply is tighter in this area of the country than perhaps in other areas. This seems to be the major booster of homebuilder profits.

There is also a stark and structural difference between existing homes and new homes. Whereas new builds offer the opportunity to move into a home where repairs are much less likely to be needed in the first few years of ownership, existing homes are usually the opposite.

As a result, I expect existing home sales to continue to lag new home sales. Geography and regional economic factors also will contribute to sales trends. Homes where repairs may require more expense than price conscious buyers can afford, or may be willing to spend, will affect buying decisions. 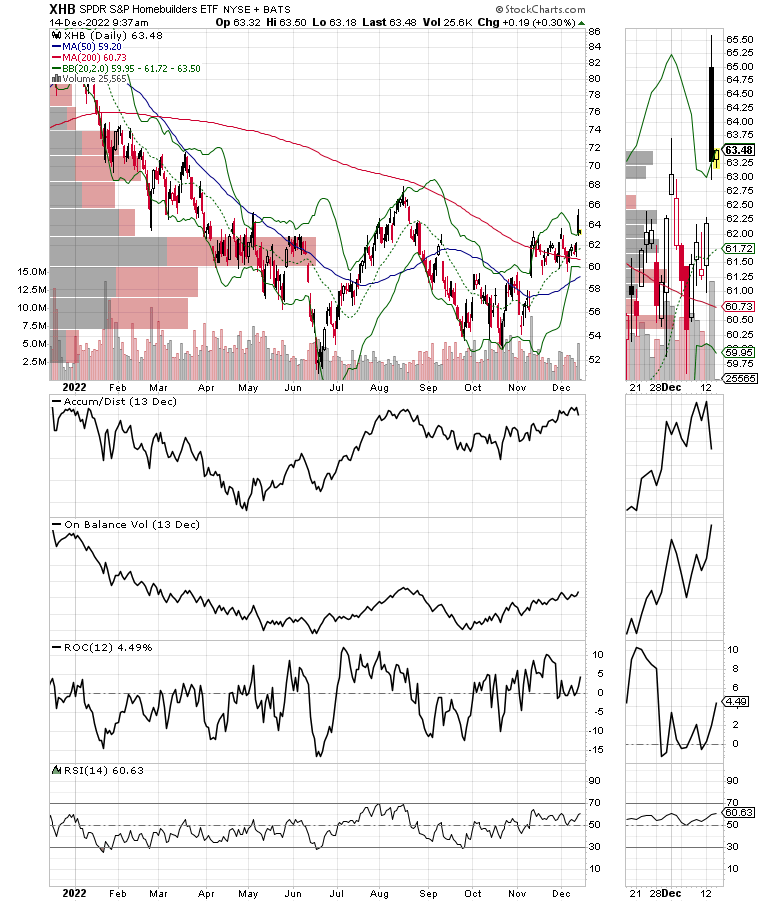 That means that new homes, especially in the sunbelt, are likely to get the nod with those who are willing and able to afford new digs.

The price chart for the SPDR S & P Homebuilder ETF (XHB) is the most bullish of all the charts in this article. That’s because XHB bottomed in June and retested that bottom near $62 in October. It is now testing the price area near its 200-day moving average, with the potential to move to the $68 area if it can clear this resistance band.

Nothing that I’ve seen so far has changed my view about the homebuilders; the supply and demand cycle remains in their favor. As a result, the long-term trends for homebuilders remain positive.

Yet, investors should always focus on sectors that are the most likely to deliver the goods, even during tough times.

Currently, the price charts and money flows for the sectors featured in this article are telling us the following:

Given the fragile macroeconomic and geopolitical environment, these conclusions may change at any moment. But for now, that’s what the price charts are telling us.

I’ll be watching these and other sectors carefully over the next few days, weeks, and months. And yes, I’ll be following the money.

Editor’s Note: There’s a way to beat the market, in bear or bull conditions. That’s where our colleague Jim Fink comes in.

Jim Fink is the chief investment strategist of Options For Income, Velocity Trader, and Jim Fink’s Inner Circle. Jim has devised a proprietary trading method that has the power to hand you $1,463 every Thursday. Just like an extra paycheck!