The Fed, The Great Migration, and Housing: Your Key to Profits

The Federal Reserve has vowed to keep interest rates “higher for longer.” Meanwhile the steady stream of individuals moving from blue states to red states, the Great Migration, shows no sign of slowing and is set to soar according to a recent report.

Thus, the Fed’s actions, through its influence on mortgage rates, may harm the prospects for homebuyers in new states.

As this confluence of events unfolds, it will create a once in a generation crisis/opportunity environment for investors.

I recently spoke to a builder who until recently was very bullish about the prospects for his ongoing townhome development in the northernmost area of the Dallas Forth Worth Metroplex (DFW), a region that has boomed for the past several years.

Suddenly, this builder isn’t so bullish. In fact, he told me that three buyers had backed out of purchasing his townhomes within a few days of each other because they wouldn’t be able to make their mortgage payments.

Fortunately, two new buyers appeared. But he’s still one shy of even. Plus, he’s got more townhomes that he’s building on the same lot that he’s not as bullish about since no buyers for them have appeared. And that’s without factoring in what may happen to the 20 other empty lots which would complete the entire development.

He added that neither he nor his partners have ever experienced such a rapid seachange in buyer attitudes. He puts the blame squarely on the Fed.

He’s not the same bullish guy I spoke to a few weeks ago.

The Migration is About to “Soar”

Most everyone is aware of the Fed’s machinations and the central bank’s tangible negative effects on the economy. But an equally important and concurrently existing macro trend where life and investments meet remains highly underappreciated: the Great Migration. And yet, this phenomenon will influence money flows through the stock market and in the economy in a lasting way.

I’ve frequently written about the migration from blue states to red states and its effects on the housing and real estate market. Admittedly, most of the data I’ve used has come from personal observation and other forms of anecdotal data.

For example, I’ve noted the number of out-of-state license plates I see while driving around the DFW metroplex while also writing extensively about the homebuilding and commercial building boom in my neck of the woods. Now, there is hard data which shows that not only have I been correct in my assessment of the migration trend to blue states, but that the Great Migration is about to pick up steam.

According to a recent article from Wirepoints.com, the population shift from red states to blue states is about to “soar.” The conclusion is based on reviews of both polling data as well as data culled from the U.S. Census bureau.

An illustrative departure from Illinois was hedge fund/equities market maker Citadel which relocated its offices, and thousands of employees, to Miami’s upscale Brickell district. I offer other examples directly below.

According to the Wirepoints report, 7.1% of all likely voters surveyed are planning to move (10.4% of Republicans, 9% of independents and others) in 2023. What makes this data striking, and what clinches the conclusion that the migration is about to increase is that only 3.1% of all likely voters have moved to red states in the past three years (4.4% Republicans and 4.1% independents and others). In other words, the number of people planning to move to a red state may be about to double or even more.

Interestingly, the data roughly corresponds to the large number of out-of-state license plates I’ve been noting and writing about for a good while now with New York, California, and Illinois representing a good chunk of my back-of-the-napkin figures.

A Collision of Possibly Galactic Proportions

I will leave the political implications to others. But it’s hard to argue with the fact that if millions of people move to red states over a short period of time, the red states will get crowded. Moreover, if this migration occurs while the U.S. economy is tanking, it’s almost as if two galaxies were on a collision course.

Certainly, homebuilders, landlords, and even homeowners who wish to sell in the region to which migration occurs may find themselves in an advantageous situation over the next few years, even with higher interest rates, just based on supply and demand. But new arrivals may find the path to housing rough due to costs, based both on supply as well as higher mortgage rates.

For example, aside from Citadel’s departure from Illinois, Goldman Sachs (NYSE: GS) is well on its way to building a large regional headquarters in Dallas. The investment bank expects to house 5,000 employees at the location. Tesla (NSDQ: TSLA) has moved to Austin from California. Toyota (NYSE: TM) was an early relocator from California to the DFW area and so was JPMorgan Chase (NYSE: JPM), which transferred a large group of employees, to Plano, just north of Dallas.

If what’s been happening at the northernmost tier of the DFW suburbs is any indication of what the future holds, the now seemingly slowing building craze in the area has been justified up to now. The current slowing is also justified. Yet, it’s likely that this slowing may be a pause in an otherwise very long-term trend upward.

For states such as Illinois and California, the economic distortions due to losses of tax revenues and jobs, combined with a glut of both commercial and residential real estate, will create a completely different dynamic.

Money on The Move

For investors, it’s important to weigh the macro factors involved in this huge population shift. Aside from homebuilders and related companies, an industry that’s difficult to invest in via publicly traded shares are building material companies.

Often overlooked are companies that specialize in building materials including insulation, such as TopBuild Corp. (NYSE: BLD). 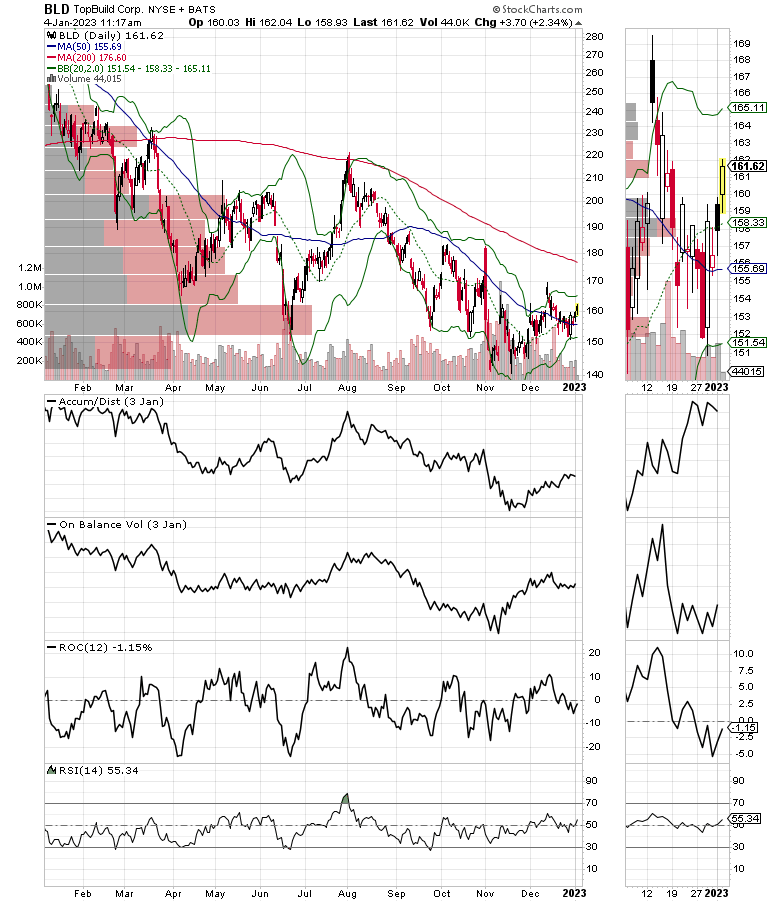 BLD is a cyclical company that rises and falls based on the homebuilder cycle. The shares tend to fall when interest rates rise and rebound after homebuilder shares pick up steam. From an investment standpoint, it’s better to wait until these types of stocks show that they are building momentum. In this case, it makes sense to wait until the stock clears its 200-day moving average. 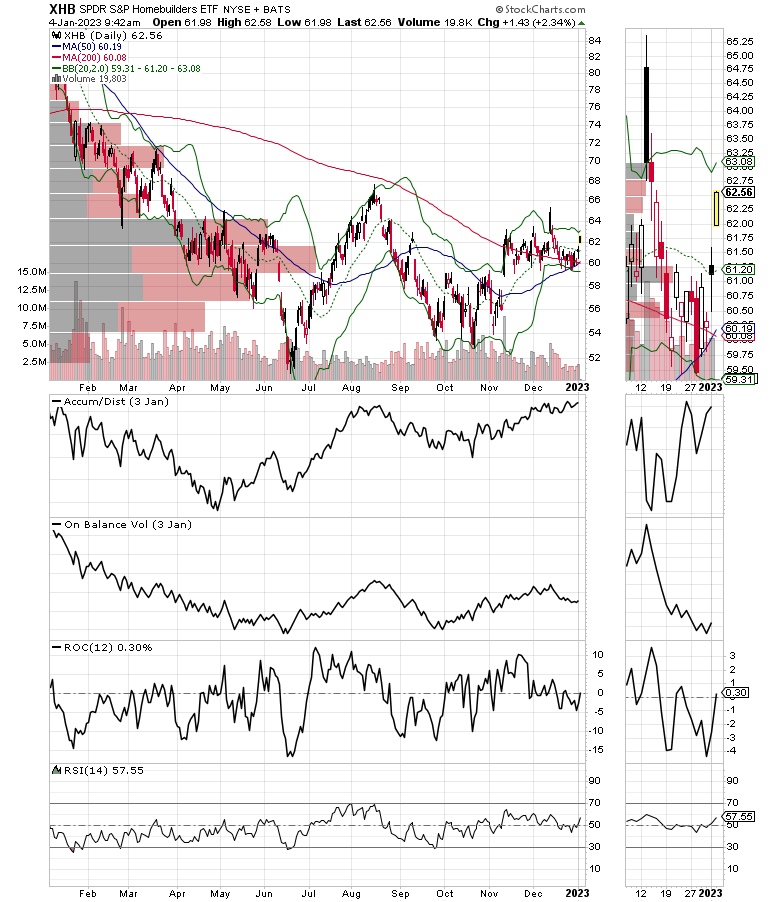 You can see the lag in BLD shares when comparing its trading pattern to the S&P Homebuilders ETF (NYSE: XHB), which is very sensitive to the trend of the U.S. 10-Year Note yield (TNX). 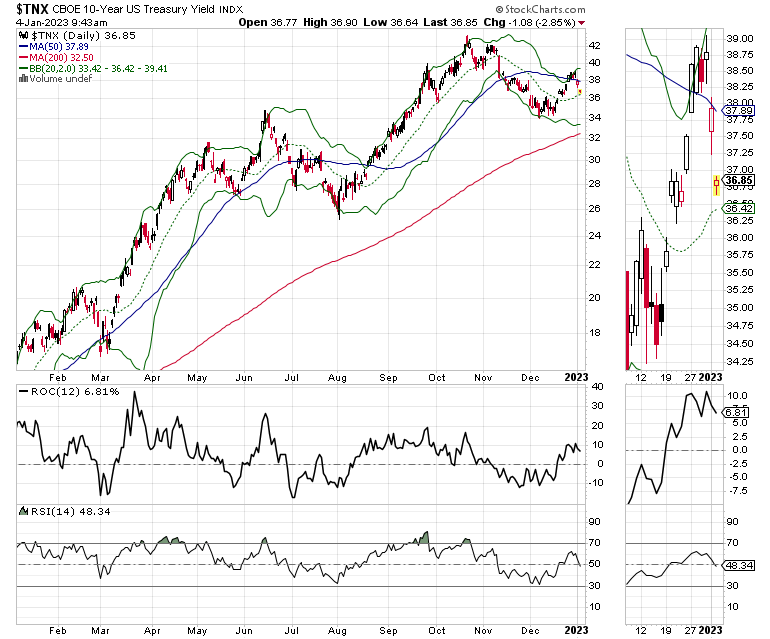 Of course, these relationships are due to the fact that a rise in TNX leads to a rise in mortgage rates, which in turn negatively affects the housing and real estate sector. This dynamic is clearly illustrated in the trading action during the first half of 2022, whereby bond yields rose aggressively and homebuilder stocks along with homebuilder material shares cratered.

On the other hand, the recent decline in TNX led to a decline in mortgage rates which has affected XHB positively earlier in the cycle.

The License Plates Were Right

Hard data confirms the boom in out-of-state license plates in DFW I’ve been reporting on for the past couple of years.

DFW is not alone, as other sunbelt states also benefit. However, higher interest rates from the Fed are starting to bite into the sunbelt, just as hard data suggests that the migration is about to pick up speed and urgency.

This creates the potential for a clash of two major macroeconomic trendds with an uncertain outcome. Specifically, in the sunbelt it brings up images of large numbers of people chasing limited availability of housing and the ensuing price melt up, which could be inflationary and prompt the Fed to raise rates even higher.

Because supply is well behind demand in the sunbelt, homebuilders and related industries are likely to continue to benefit from this trend for the foreseeable future, although the road will likely be bumpy.

The interaction between interest rate policy from the Federal Reserve and what happens in the bond/mortgage market will clearly influence the outcomes.

The question for investors is whether the need and urge to move will overshadow the Fed’s influence on stocks, which would benefit from the migration surge. If indeed it does, we can expect to see stocks such as BLD and ETFs such as XHB outperform the general stock market over the next 12-18 months, even as the Fed raises rates.

Publisher’s Note: Every portfolio should have exposure to the marijuana industry. That’s why we’ve just launched a new service detailing how you can financially benefit from the consumer mainstreaming of cannabis and psychedelics.

Called Marijuana Profit Alert, this publication is your guide to reaping profits from these megatrends.

In this service, our editorial director John Persinos provides specific, actionable investment guidance for investors in the booming marijuana and psychedelics industries.

As 2023 unfolds, an increasing number of U.S. states (and countries around the world) will legalize cannabis and psychedelics, which in turn will create new markets, new sales, and big profits for the investors who act now.