Cash In on Drug Testing

Big acquisitions always get our attention, and last year ranked as the biggest year ever for mergers and acquisitions, as measured by deal value. But many deals flop. Cultures clash, expense-cutting plans wilt and “synergies” never materialize.

When they do work, though, ho-hum performers can catapult to superstars. Charles River Laboratories International’s purchase of WIL Research puts it on such a path.

Not only does the WIL purchase let Charles River (NYSE: CRL) broaden its menu of services and gain a new industry of customers, but it also increases profits immediately, a rare occurrence for corporate mergers. This deal will propel Charles River’s business for years to come. Earnings will shoot up 17% in 2016 and 19% in 2017 from a respectable but dull mid-single-digit rate before the deal. These estimates do not include additional benefits from cross-selling new products to existing customers or existing products to new customers.

Charles River currently trades with a P/E of only 15 times the new 2017 estimate despite this 19% growth rate.

As with all Launchpad stocks, we were first tipped off by a surge in trading volume. Charles River stock traded more than 2.5 times its average volume on January 7 and rose 3%. The Launchpad method uses a customized version of the Force Index, a technical indicator measuring investor enthusiasm for a stock, to identify potential buys.

The River Is Wide

Charles River was founded by a veterinarian who bought thousands of rat cages and set up a lab overlooking the Charles River in 1947. The vet recognized early the need for big drug companies to outsource research and development services.

Charles River is now known as a contract research organization. CROs provide services to biotech and pharmaceutical companies developing new drugs—CROs test products so the companies don’t have to. We’ve always loved the concept of CROs because they cash in by providing an expensive service while taking none of the sometimes outrageous risk their clients do when they bet on FDA approval of a drug. 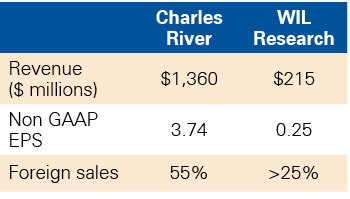 Subcontracting testing and research to CROs is growing rapidly. In part this is because the gigantic pharmaceutical mergers of the past few years are justified by cutting research and development expenses.

Drug companies look to biotech companies as portable research labs, and also as a way to limit their risk. When joint ventures are struck with biotechs, the latter collect royalty payments upon success. This allows drug companies to harness the potential of new drugs while curtailing the risk—no success, no royalty payments.

But biotechs are overwhelmed and look to CROs for help. Funding to biotechs hit a high last year, yet many of these companies do not have the resources or the scale for all the research and testing needed. This work is moving over to the CROs.

The merger with WIL (based in Ohio) gives Charles River a pipeline to more European deals, which is especially important because of “tax inversion.” Many of the recent drug mergers involve a European counterpart, a maneuver referred to as a tax inversion, which lowers the corporate tax rate for the purchaser. Charles River currently gets about 32% of its revenue from Europe but has been looking for more capacity to serve its customers who now have offices there. WIL’s two European facilities will allow Charles River to serve more European customers.

… And on the Farm

The merger also diversifies Charles River’s customer base. One quarter of WIL’s revenue comes from testing compounds for agricultural, industrial and chemical companies. Charles River can now sell this new set of customers many of the services it currently sells to biotech and drug companies. 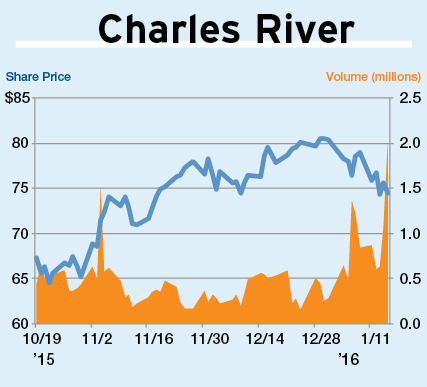 Demand in Europe has been strong for this service due to regulations that require all chemicals be routinely tested for safety. WIL also provides regulatory consulting, environmental and ecotoxicology services to global companies wishing to operate in Europe.

The need to balance more productive crops with increased safety will continue to drive customers to WIL for chemical testing. As Monsanto, Syngenta and Mosaic explore more sophisticated fertilizers and seeds, their need to grade the safety of these products should expand.

For the past few years Charles River has boosted revenue and earnings growth via small acquisitions. Typically these purchases bring a new, specialized service into the company. These acquisitions allow Charles River to offer customers services that span the spectrum of drug development, from inception to manufacturing.

WIL’s expertise in assessing the safety of new compounds will play into Charles River’s other services. Management explains that once a customer begins the research process with one firm (early-development-stage work is done with WIL), it is unlikely to switch to another for the next phase of development.

And outsourcing early-development work is growing rapidly. Management predicts it will rise from 50% now to 80%.

The WIL acquisition is expected to add 20 cents per share to 2016 estimates based on a late-second-quarter closing and at least 50 cents in 2017. The chemical reaction between these two firms revs earnings up 19% to almost $5 per share in 2017. Charles River could be raging up to triple digits with numbers like these.

Buy Charles River Laboratories up to $79.