The smaller computer chips get, the bigger Photronics’ sales become. And chips continue to shrink to mind-bendingly tiny sizes.

Over the past two years Photronics (NSDQ: PLAB) has been developing tools used to make these increasingly smaller, more powerful chips. Its most recent quarter showed the bounty reaped from this strategy. Revenue from its “photomasks” grew 28%, much faster than overall revenue. These highly profitable masks helped fatten margins and caused net income to quadruple.

Although Photronics had these cutting-edge masks a year ago, big customer orders have just started spilling in. We noticed this when the stock’s trading volume spiked in early December. The stock traded at more than five times its average volume and jumped 5%.

This is exactly the type of volume spike that the Launchpad method screens for. It alerted us that a new development could be at work at Photronics. (This was the second quarter in a row that Photronics saw a surge in volume on positive numbers.)

At a brokerage conference last week, Photronics’ management explained how the increased complexity of new chips and device screens are causing a geometric spike in demand for the company’s products. In fact, CEO Peter Kirlin called the shift in demand unprecedented. 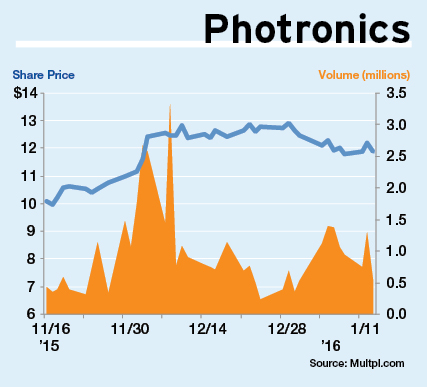 Earnings have more than doubled in the last two quarters, a trend that should continue for the current quarter. Although growth is expected to slow to 28% in fiscal 2016 and 19% in fiscal 2017, the stock trades at a temptingly low valuation—just 13 times 2017 estimates.

Earnings per share are expected to jump 28% this year and another 19% in 2017, to $0.98. Revenue growth is driving some of the earnings improvement, but management’s tenacious hold on operating expenses has magnified the improvement.

At last week’s conference, Photronics CFO Sean Smith described a likely scenario of the company generating 92 cents in earnings per share for fiscal 2016. He specifically noted that this was not official guidance for fiscal 2016, when analysts expect an EPS of 82 cents, but earnings are definitely moving in the right direction with an attractive growth trajectory.

And the company has a strong balance sheet. Aided by its net cash balance of $74 million, Photronics has been paying down its $67 million of long-term debt with free cash flow. Buy Photronics up to $15.

It should come as no surprise that the size of logic and memory chips (collectively known as integrated circuits or ICs) is shrinking rapidly, while at the same time their capabilities grow exponentially. Companies like Micron and Samsung design these chips, but Photronics makes sophisticated tools called photomasks to help produce them.

Photomasks work like stencils to engrave complex instructions on a chip. The masks are placed over wafers, and electrons beam through the mask to “etch” the patterns onto the wafer. These patterns tell the chip what to do.

As the size of the wafer on which the chip is built shrinks, the need for masks increases. Moore’s Law, which predicts a doubling of transistor density per chip each year, benefits Photronics greatly. As chips become smaller, more photomasks are needed per chip design. Previous cycles of chip designs needed only 30 to 40 masks, versus recent designs that require up to 100 masks.

Photronics revenue is growing from the increasing volume of masks the company produces and their higher prices. Higher pricing on more elaborate masks adds to the growing profits from record volumes pushed through the factory.

Micron, a longtime customer of Photronics, has been at the forefront of 20-nanometer manufacturing. Photronics began producing masks for this wafer size in the second quarter of 2015, and volume continues to grow. Additional designs and a flurry of development should keep revenue streaming.

Meanwhile, volume from a new revolutionary chip is expected to ramp up in 2016. The 3D XPoint, a memory chip co-developed by Intel and Micron, is a thousand times faster than current chips.

While cutting-edge chips are a high-growth area, traditional chips are holding their own. Production of masks for mainstream chips, those larger than 45 nanometers, had been plagued by price-cutting but has stabilized over the past few quarters.

In general, the market for the masks picked up following a wave of demand for chips orchestrating the Internet of Things. That’s the blanket term for how computer chips are loaded into everything from cars to cats (identification chips) to security cameras to fitness monitors, and how all those chips can connect to applications over the Internet.

Some industry research suggests that the semiconductor market for these things could increase more than 30% annually for the next few years. Although these are not super-complex chips, they do represent new designs and consequently need many new photomasks. Profits for these masks are lower than for high-end masks, but so many are made that those lower margins add up.

Also, demand for flat-panel-display (FPD) masks is picking up. Increased production of advanced, high-definition screens, used in Samsung’s newest A3 mobile phone, are driving the need for more FPD photomasks. High-end FPD revenue was $22.5 million in the fourth quarter, up 24% from the previous quarter.

Management noted that market demand for advanced displays is extremely high. New equipment serving this segment, which Photronics began using earlier this year, has been running at full capacity.

Photronics earnings are expected to jump 28% in 2016 and another 20% the following year. Based on average growth of 24%, the stock could hit the mid $20s.

Please update on Photronics, PLAB. Any change with the news and recent earnings?
Is this a buying opportunity or would you hold the position?

Do you use liquidity as a filter for screening stocks? bid/ask spreads?

Henry,
I don’t see the PLAB news as a deal breaker. Although it is always disappointing to have an earnings miss, this one is not gigantic and the company is still growing earnings exponentially. The 16c for the quarter is still more than twice last year’s earnings. I am eager to hear management’s commentary on order trends for logic chips, as this business can be lumpy. The fact that the company was so optimistic at an analyst event less than one month ago tells me they likely had one larger order that was delayed. Right now the stock is trading at 10x 2017 numbers which are expected to grow 17%. This strikes me as too cheap for a solid grower.
I do not use a liquidity screen specifically but do not usually traffic in names that trade less than 250k shares a day. That is partly because very illiquid stocks find it hard to get institutional investors interested, a development that typically drives a stock significantly higher.
Thank you for being a subscriber Henry. I’ll be updating more with the monthly letter which hits this week and certainly when the company releases official earnings on Feb. 24.
Best,
Linda