Riding the Next Solar Wave

Has the sun set for solar stocks? Benchmark Guggenheim Global Solar ETF is down by half since its April peak. And recently a major solar company’s woes have roiled the solar market even more.

The carnage has been broad, with solar system operators and equipment suppliers alike hit hard. But solar installations continue growing rapidly worldwide; many solar operators still expect growth of 40% to 60% for the next few years and are positioned to make a lot of money in the sector.

SolarEdge is one of them.

SolarEdge (NSDQ: SEDG) makes inverters and optimizers for solar panels. These high-tech boxes are the brains behind solar panels, allowing them to convert and maximize energy collected from sunlight. Consider:

SolarEdge revenue skyrocketed 144% in fiscal 2015 and was up 72% in the first quarter of this year.

The stock, which is down 54% since its midyear high, trades at a puny price-to-earnings ratio of 10, despite this impressive growth. 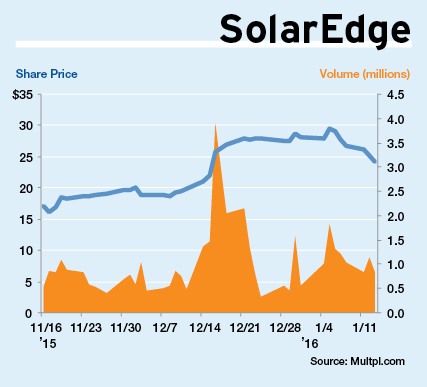 Buying stocks simply because they are bumping along 52-week lows can be a dangerous business. Stocks need a catalyst to move higher, and our Launchpad system first uses trading volume to uncover such catalysts. On November 5, SolarEdge traded 3.8 million shares, almost five times its average volume.

That caught our attention, and then we discovered that SolarEdge is making the kind of changes we expect from a Launchpad stock. Around the time of that volume spike, management revealed that its new HD Wave technology would lower the cost of manufacturing dramatically.

This technology both addresses the new, lower-cost mandate driving the solar business and eases investor worries about a competitor that was undercutting SolarEdge’s prices.

Also on November 5, SolarEdge stock closed up 28%, but the market still hasn’t recognized the company’s full potential. Considering its stellar earnings power, there’s plenty of room to run. Buy SolarEdge up to $32.

Since our recommendation for SolarEdge on January 5, the company has dropped about 14%. Some of this can be attributed to the overall market, which has been hit hard by China’s troubles and further plunging oil prices.

But in addition, the solar group has been under extreme pressure recently. Some of this may be explained by worries over a federal investment tax credit, which now allows for a 30% tax credit on solar systems. This was scheduled to drop to 10% at the end of 2016, but in December that credit was extended through 2019.

Although prices are down, solar operators haven’t cut orders dramatically. The companies have become more price-conscious, though, and this is exactly the world SolarEdge is prepared for, with its cheaper, better products.

Tax credits aside, I believe the bulk of the sector’s recent decline is due to the maelstrom surrounding Sun­Edison (SUNE).

SunEdison owns solar power and wind energy plants. Its stock has been cut in half since January 4 because of the terms of a debt refinancing that diluted the interest of current shareholders. The company has been juggling major debts that it accumulated while buying up various wind and solar projects. SunEdison is a small customer of SolarEdge’s, so a slowing of its purchases should not have a large impact on SolarEdge. I consider this move noise and I am still confident about the prospects for SolarEdge. 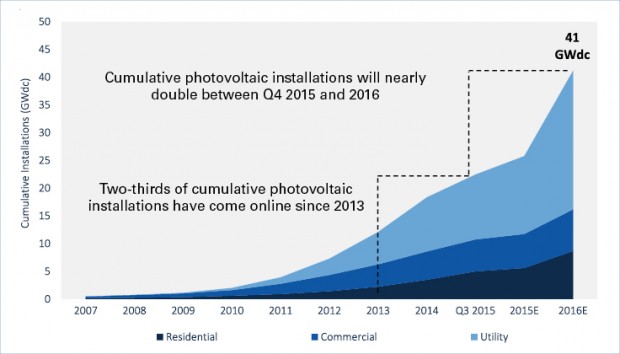 SolarEdge’s announcement last week of the availability of its solar battery illustrates how the company is operating one step ahead of the utility industry. Use of this battery lets consumers become increasingly independent of the utility grid, allowing them to store excess energy at their home for future use. Although the current capacity of these batteries is not enough to allow consumers to completely unhitch from the grid, it is a revolutionary product.

Keep your eyes open for updates on SolarEdge. Again, I remind subscribers that my timeframe for recommendations is six to 12 months. Falling stock prices can be unnerving, but they do not always reflect the fundamentals of a stock.

SolarEdge’s business is boosted not only by solar market growth but also by a switch from traditional wiring to SolarEdge’s innovative products. The company’s recent announcement of the HD Wave product will power up growth as the industry expands and the company continues to take market share from competitors.

The company has been successfully reducing costs and introducing more efficient products to help its customers excel as subsidies disappear.

Enphase, a competitor and an early entrant in the inverter market, had long commanded majority market share despite having more expensive products. With SolarEdge’s more efficient and lower-priced products widely available, Enphase suffered dramatically and struggles to overcome its high costs.

SolarEdge’s new HD Wave inverter, introduced in September, will boost growth more and allow the company to prosper while offering lower prices to its customers.

Even before the HD Wave was introduced, industry experts had already blessed SolarEdge’s products in comparisons with Enphase. The HD Wave inverter should widen that lead considerably. Management calls the product “one of the most significant leaps in solar technology in the past 20 years.” SolarEdge increased the inverter’s efficiency to 99% while reducing the size and weight of the box. HD Wave inverters should represent close to 100% of all inverters sold by next June.

Although SolarEdge’s growth will slow from last year’s triple-digit rates, it will still outpace that of the overall solar market. The HD Wave technology also lets SolarEdge expand more aggressively into the corporate market, and eventually the utility market, which requires more robust hardware.

SolarEdge has been solidly profitable for the past five quarters. Its balance sheet is rock solid, with more than $3 per share in cash and zero debt. The company has shown it is adept at increasing profits despite lower industry pricing and is prepared for stormy weather.

Take advantage of this passing squall, and wait for the sun to shine for SolarEdge.