Time to Stash This Retailer in Your Bag

Can a leopard change its spots? Vera Bradley thinks so. The purveyor of floral-patterned, cotton handbags has been luring customers back to its stores with new, sophisticated styles. These sleek monochrome microfiber and leather bags are impressing consumers so much that an unstylish decline in revenue has been reversed and profitability is rebounding.

Although some of the new styles were introduced as far back as August 2014, it has been a long, bumpy road for investors who bought the stock then, hoping for a turnaround. The stock, which traded at $30 in spring 2014, has hit turbulence almost every quarter since, as hopes proved premature. The Launchpad method, which is based on buying a stock only after a volume spike confirms a fundamental change, would have saved investors the misery of watching their investment drop to below $10 last September.

Vera Bradley (NSDQ: VRA) has beaten sales and profit estimates for the last two quarters, mainly because of the higher sales of these new bags. The stock jumped 50% since a 28% leap in earnings was reported in December but should continue to race higher as estimates catch up to this striking growth. Fourth-quarter results, which will be reported in early March, will reflect the uber-important holiday season. Current estimates expect only 15% growth in fiscal 2017 (ends January 2017), a conservative rate considering the much higher growth showcased last quarter. If annual growth for the next fiscal year keeps that pace, the stock could rocket to the mid $20s.

The company, named after the mother of co-founder Barbara Bradley Baekgaard, was born in suburban Indiana. Two friends, frustrated at the lack of colorful and fun luggage for their college-age daughters, started designing fabric bags. On a $500 initial investment ($250 per founder), the company grew from $10,000 in sales the first year to $1 million three years later.

At first, it sold products only through boutiques. Over time, distribution extended to department stores. These indirect sales, which now represent less than a third of sales, generate half of operating income. 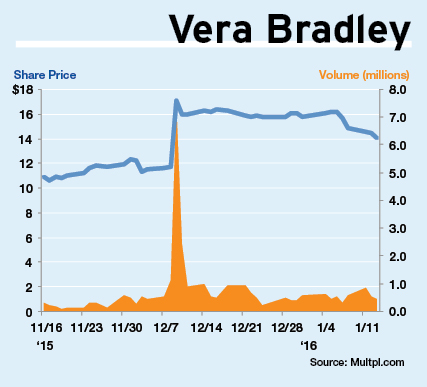 In 2007 the company opened its first company-owned store and has added roughly 20 a year, for a total of 148 stores open as of December 2015. Of those, 110 are full-price stores and the balance factory outlets. Products are also sold through 620 department stores, primarily Dillard’s and Macy’s.

In its heyday, Vera Bradley bags were a must-have item. Back in the fall of 2012 almost every high school girl could be seen toting her algebra book in a pink or purple paisley Vera bag. Active moms toted their colorful diaper bags to the playground. Fourth quarter 2013 (ending January 2013) was the highest for revenue in the company’s history. The explosion in popularity of these bags bred overproduction. The company ramped up the cadence of new design launches and spun out a dizzying array of floral patterns. Product extensions included eyeglass holders, keychains, notebooks and even pencil cups adorned in bright floral motifs. A virtual flower bomb exploded on the shelves of Vera stores.

It wasn’t long before consumers couldn’t tell the difference between an Alpine Floral pattern and a Parisian Paisley. Small boutiques with limited shelf space found themselves up to their ears in bags. Ugly markdowns ensued and Vera bags could regularly be found at 60% to 70% off. Product margins, which had been as high as 57% in fiscal 2011, dropped to 53% in fiscal 2015.

After the Purse Purge

Clearing out this excess inventory took some time. The purse purge, which began in June 2014, has finally worked its way through the system. Vera Bradley stores and its boutique partners’ shelves are now full of mostly full-price items. Roughly half the products in the market are new, polished styles.

Customers are now greeted with sleek navy Stella satchels adorned with a classy gold-plated clasp. Classic plaid patterns mirror successful Burberry bags. Leather bags, available only in company-owned stores, sport a significantly higher-than-average price ($200 to $300) and could rival any Coach bag for style. Management has cut back the pace of new patterns with only 11 planned for 2016, down from 18 in previous years.

These new, chic bags are attracting customers new and old. Comp store sales, data that measures the change in sales excluding the lift from newly opened stores, were down 2% in the October quarter. Although negative comps are never a good thing, the 2% drop is a dramatic improvement from the 22% decline suffered in recent quarters.

Most impressive has been Vera’s ability to improve margins with negative comp sales. Gross margins, profit left over after product costs and store expenses, has been improving for the past three quarters. Management notes that future margin increases are coming in 2016, as bags are produced at a new, lower-cost factory. The October quarter showcased the most dramatic improvement, a jump from 52.5% to 58%. The bulk of this change dropped to the bottom line with earnings leaping 28%.

Despite depressed earnings over the past two years, Vera’s balance sheet is healthy. The company has no debt and has generated positive cash flow every year since 2009. The company has guided conservatively, calling for flat earnings in the critical January quarter, and 2017 estimates for 15% growth are equally staid. A newly energized palette of patterns should leave Vera with earnings in the bag.