The U.S. stock market has some unfinished business.  Two weeks ago in this space I warned that the market was vulnerable to a decline.  And I was both right and wrong, all within a few days, as the market crashed and recovered over the space of a week after the Brexit vote.  To be sure, this type of performance has been par for the course in what remains an intriguing market dynamic fueled more by central bank manipulation of interest rates and less by underlying economic fundamentals.

This week I’m looking at two different market indexes; the S&P 500 (SPX) and the Nasdaq 100 (NDX).  SPX is considered the leading market benchmark because it is a diversified index that includes stocks from all major industrial sectors. The Nasdaq 100 is a very popular index, but it is heavily weighted toward large cap technology stocks.  By comparing the money flow in the two indexes we can see where how committed investors may be to the current price trend in two indexes that attract a lot of money.

I want to look at four indicators: the Money Flow Index, which measures money moving in or out of the market, the MACD (moving average convergence divergence) and MACD histogram indicators, which measure the market’s momentum, and the On Balance Volume indicator, which measures the conviction of investors to the current trend.  When money flow, on balanced volume, and the MACD complex are rising simultaneously they confirm each other and suggest that the dominant trend of the market is up as money is flowing in with conviction and momentum.  When there is solid investor commitment there is usually a solid price trend.

Despite all the media fireworks surrounding the Brexit, the last six trading days in SPX show a flat market composed of two days of intense selling, followed by four days of rebound.  A closer look suggests that the selling was more intense (red price candlesticks) than the buying (white price candlesticks). This is supported by comparing the price action to the volume spike (pink volume bars) on the two days after the vote, June 24 (Friday) and June 27 (Monday) and on the following four days (grey volume bars).  What we see is wider price movement and higher volume on the down days than on the up days.  The Money Flow Index (MFI, upper chart panel) dipped slightly during the selling and recovered on the rebound days, but did not make a new high.  The MACD histogram dipped to a lower low on the selling, and had what seems to be a weak bounce above the zero line on the rebound.  And the On Balance Volume (OBV) indicator behaved similarly, but also remains neutral.  This suggests that more money came out of the market initially than went back in, but that it may have evened out by now.  Another way to look at it is that while investors have not lost total confidence in the S&P 500, they are still waiting to see what happens next before making a full commitment back into this area of the market. 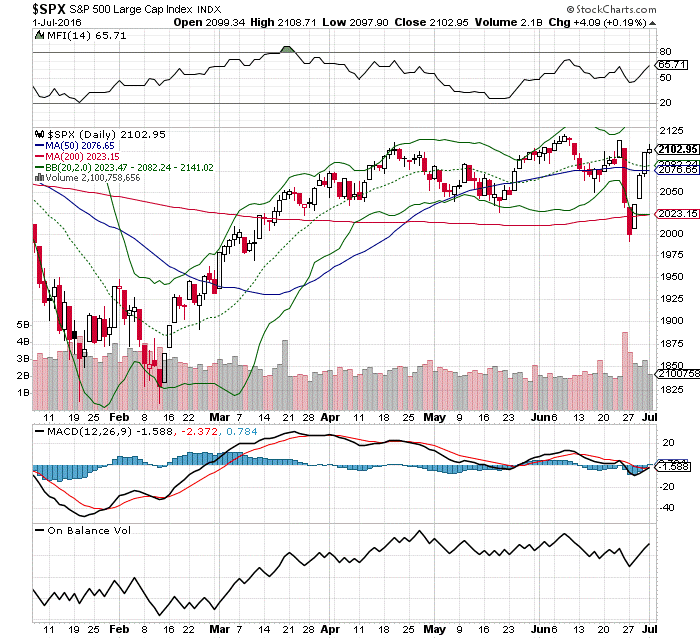 The story is a bit more interesting for the Nasdaq 100, where the Money Flow Index (upper panel) indicator was extremely oversold prior to the Brexit and has rebounded with more energy than the MFI for the SPX index.  As I noted in my July 18 issue of Technical Nuggets, MFI for the NDX index had collapsed, a sign of a very weak market.  Thus, a bounce was overdue, and the Brexit rebound theme is the perfect reason for such a bounce.  The real question is whether this will be a meaningful bounce or one which had to happen given the extremely oversold technical situation that preceded it.

The rest of the chart is actually fairly negative on multiple levels.  Prices are still making lower highs and lower lows on NDX, defining an unresolved downtrend. This negative appearance is confirmed by the MACD and MACD Histogram indicators (second to lowest panel), which are flat, suggesting a lack of big momentum to the up side.  Finally, On Balance Volume (OBV) has bounced from its extremely oversold levels without hitting a home run. 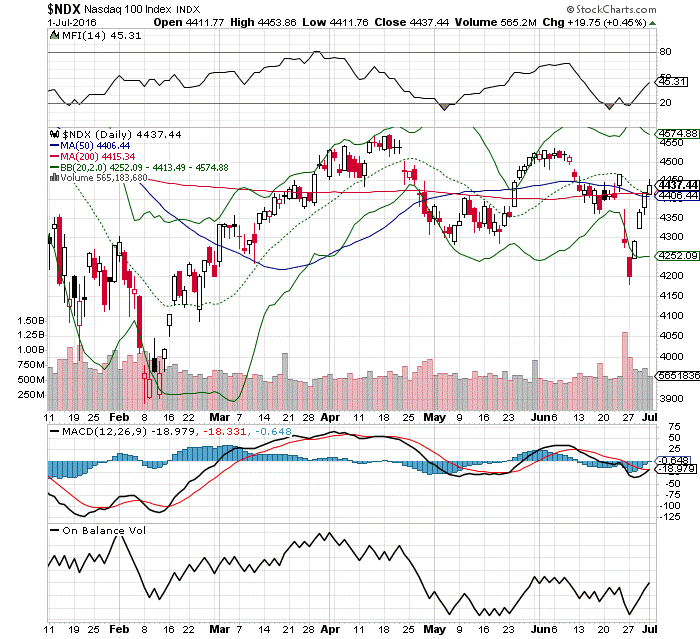 Investors are still skittish after the Brexit episode, and the four-day bounce after the two-day decline may be running out of steam or going nowhere for a while.  More money is flowing into the S&P 500 than the Nasdaq 100 which suggests an aversion to risk on the part of investors who seem to be avoiding the more volatile stocks in NDX.  This is an asymmetrical or divergent market.  Neither index is acting in a way that suggests that investors are committed to a long term engagement to the uptrend currently.  Yet, the S&P 500’s relative stability gives some comfort and perhaps some false hope.  In other words, without looking at both indexes, we might have gotten a sense of false security.  And while there is no way to know if there will be another crash tomorrow, it would not be surprising to see more sellers than buyers in the market given any extraordinary situation.   What would be the straw that breaks the bearish case’s back? A huge rally above the 2132 level on the S&P 500 with big volume to the up side, extremely positive money flows, and a show of no doubt in momentum. It could happen.