As the family gathered at my house this past holiday weekend, I was reminded of how the youngsters love watching horror movies.

For the record, I find these films masochistic and usually walk out of the room when they’re playing. But the kids in my extended clan love ’em. The biggest thrill for horror fans is what Hollywood calls the “jump scare.” That’s when something frightening occurs suddenly and without warning, to literally make viewers jump out of their seats.

The news headlines these days are full of jump scares, of the investment variety.

FOMO — Fear of Missing Out — has shifted to just plain fear. Investors have gone from euphoria (fueled in large part by delusion) to jumpy pessimism, as geopolitical risks threaten to tip the world economy into recession.

The CBOE Volatility Index (VIX), also known as the “fear gauge,” has risen 25.6% over the past six months (see chart).

The top worries right now are the escalating trade war, recessionary red flags, and the deepening chaos of Brexit. But there’s other bad news out there, too. Slowing corporate earnings growth, the inverted yield curve, multiple crises in Argentina and Italy, protests in Hong Kong, international tensions over Iran — these woes weigh on economic growth and the markets. In a minute, I’ll discuss defensive sectors that make sense now.

U.S. stocks closed deeply in the red on Tuesday as data showed factory activity contracted in August for the first time since 2016, fueling fears that the protracted trade war could push the U.S. economy into recession.

The Institute for Supply Management reported yesterday that its index of national factory activity dropped to 49.1% in August, missing the consensus estimate of 51.1 and down from 51.2% in July (see chart). Any reading below 50% indicates a contraction in activity. Jump scare, indeed. 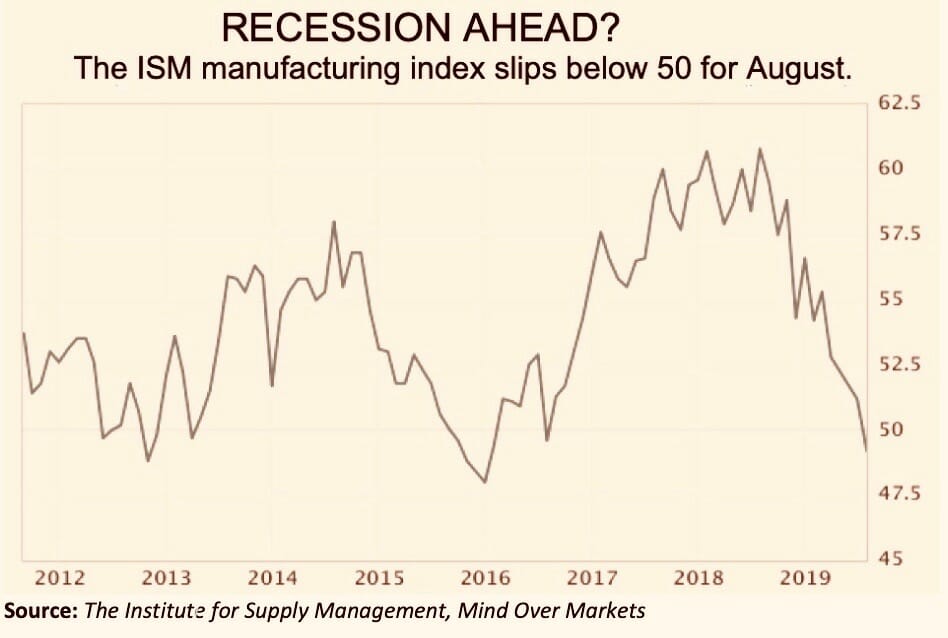 ISM stated that comments from supply managers reflected “a notable decrease in business confidence” in August.

The U.S. Commerce Department on Wednesday reported that the U.S. trade deficit narrowed slightly in July. However, the trade gap between the U.S. and China surged to a six-month high — despite a protectionist policy that the White House has pursued since January 2018.

The easing of tensions in Hong Kong was enough to push the three main U.S. stock indices into the green today. As of this writing on Wednesday, stocks were bouncing back from Tuesday’s plunge, although by late morning they were losing traction. Intra-day roller coaster rides are becoming more frequent, another bad sign.

The markets started this holiday-shortened week on shaky ground, as Washington and Beijing launched a new round of tariffs over the Labor Day weekend, dashing hopes that the trade war would soon get resolved.

Wall Street will keep a close eye on the monthly jobs report scheduled for release Friday, looking for clues as to whether the Federal Reserve will be forthcoming with another interest rate cut at its next meeting September 17-18.

It didn’t help Wall Street’s mood when President Trump on Tuesday took to Twitter and taunted the world’s second-largest economy. Trump suggested that the Chinese are stalling in the hope that a new and less protectionist occupant would inhabit the White House after the 2020 election. He warned Beijing not to drag its feet in trade negotiations:

“Think what happens to China when I win. Deal would get much tougher! In the meantime, China’s Supply Chain will crumble and businesses, jobs and money will be gone!”

Impulsive trade threats delivered via Twitter will haunt the stock market for many more months. Exacerbating these headwinds is the waning momentum of a late-stage economic expansion.

Read This Story: Late-Cycle Investing (Before It’s Too Late)

Bear markets usually coincide with recessions. It’s not encouraging, then, that global Purchasing Managers’ Indices (PMIs) have been declining. Take note that the utilities and consumer staples sectors tend to be inversely correlated with PMI readings. Under current late-stage conditions, these are the sectors you should be emphasizing.

For yield within the stock-designated portion of your portfolio, defensive groups are appealing. The average yields for utility and consumer staples are 3.3% and 2.9%, respectively — both above the average S&P 500 yield of 2.1%, according to research firm FactSet.

One of the factors putting a floor under the stock market has been the consensus on Wall Street that the Fed will cut interest rates again. What’s more, the 2017 tax cut, as well as the massive federal budget deficit, have been juicing the equity markets with stimulus. But all of that stimulus is waning and geopolitical risks are taking center stage.

One potential catastrophe is Britain crashing out of the European Union on the deadline of October 31, with no deal in place.

British lawmakers on Tuesday rebelled against embattled Tory Prime Minister Boris Johnson and voted to prevent the country from exiting the EU without a formal agreement.

Voting for the motion were 21 Conservative MPs, including Nicholas Soames, grandson of Winston Churchill. Johnson promptly expelled all 21 from the party, on the exact day when, 80 years ago, England declared war against Germany and brought Winston Churchill back from political exile.

The stand-off between Boris Johnson and Parliament is likely to trigger a snap general election. Johnson also lost his party’s parliamentary majority yesterday when a Tory member defected in protest of Johnson’s suspension of Parliament.

On Monday, far-right nationalist leader Nigel Farage said he would enter into a general election pact with Boris Johnson, but only if Johnson plays hardball with Europe.

Economists warn that a no-deal Brexit could sow recession across Europe, causing collateral damage to America and the global economy. Germany, in particular, would take a big hit to its already sputtering manufacturing sector.

After the UK’s 2016 referendum vote to leave the EU, the betting among pundits was that Britain would get easy terms for departure. This isn’t happening. EU officials have expressed exasperation with three years of fruitless negotiations and they’re ready to wash their hands of the Brits. Forget horror films. Brexit has become a Peter Sellers farce. Without the laughs.

When the UK ceases to be a member of the EU in October 2019, all rights and reciprocal arrangements with the EU will end. A leaked UK government document paints a grim picture of Brexit’s fallout, predicting shortages, gridlock, job losses, supply chain chaos, dented economic growth, and perhaps even social unrest. In your portfolio, now’s the time to reduce exposure to European-centric equities.

Any number of “jump scares” could cause the markets to sharply fall. Hold on to your seat.