As we join the latest episode, U.S. President Donald Trump and his antagonist, Chinese President Xi Jinping, seem on the verge of signing a “phase one” trade deal. But hang onto your seats. Xi is suddenly pushing for greater tariff relief than Trump wants. Insults are flying! The deal is off.

Will Trump and Xi patch up their quarrel? Or will the war continue? Tune in next week.

That’s what these trade “negotiations” seem like to me, anyway. Considering the fact that the president of the United States is a former reality TV star, you can’t blame me. Which is why my expectations of genuine progress on trade are low. Truth is, neither Washington nor Beijing is bargaining in good faith.

Investors this week were getting their hopes up that a trade truce was imminent, but then President Trump unexpectedly told reporters Wednesday that he wasn’t ready to make a deal because China wasn’t “stepping up to the level” that he wanted. Trade experts and White House sources underscored the pessimism, by indicating that an interim deal probably won’t happen before next year.

In pre-market futures trading this morning, all three main U.S. stock indices were poised to open in the red, as investors continue to worry about renewed trade tensions. Violence in Hong Kong and impeachment hearings in Washington are adding to investor anxiety.

Below, I’ll show you how smart investors should position their portfolios amid these political theatrics.

The implosion of trade talks is a far cry from the smooth assurances we were hearing in recent days that a deal was making substantial headway. Don’t say I didn’t warn you.

Meanwhile, on December 15, tariffs of 15% on $155 billion in Chinese goods are scheduled to kick in, affecting holiday gift items such as clothing, decorations, electronics, and sports gear. Major retailers such as Target (NYSE: TGT) recently reported stellar third-quarter operating results, but the new tariffs could hurt the retail sector and snuff out chances of a Santa Rally.

Meanwhile, the U.S.-China trade war has pulled in the rest of the world, notably Europe.

The euro zone’s export-intensive manufacturing sector is suffering from trade tensions and a concomitant slowdown in global demand. Britain’s exit (“Brexit”) from the European Union isn’t helping matters. Purchasing Manager Index (PMI) readings for the euro zone showed some unexpected life in October, but they still hover near multi-year lows.

Take a look at the chart below, courtesy of the research group FactSet. An index reading above 50 indicates an expansion in overall activity while a reading below 50 indicates contraction. 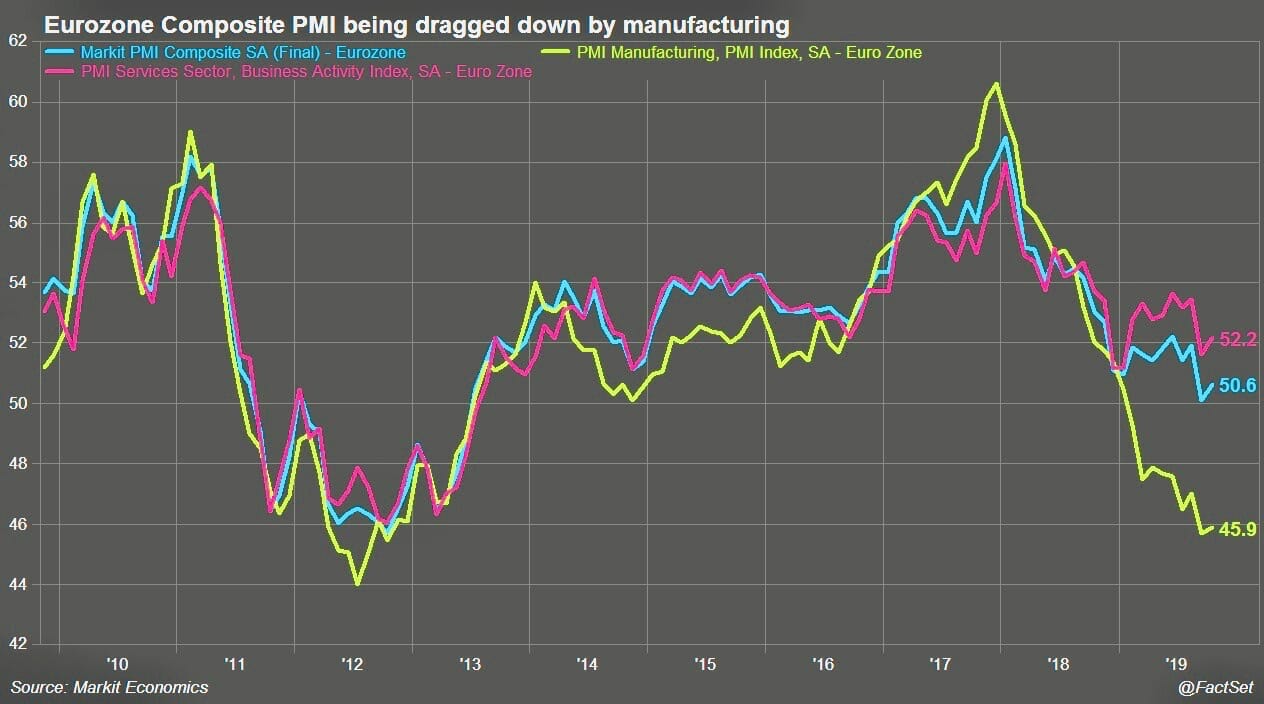 A national election in the UK is scheduled for December 12. Uncertainty over Brexit and paralysis in Parliament is hurting economic growth in Britain.

Collectively, the EU is the world’s second-largest economy, in nominal terms, after the United States. Britain is the fifth largest. What happens in London and Brussels affects U.S. investors.

Notes from the Fed’s last meeting October 29-30, when it lowered interest rates by a quarter percentage point, show that the U.S. central bank is done easing for 2019. Some Fed policymakers expressed the view that inflation is a bigger threat than Wall Street realizes and it would be imprudent to cut rates further.

Unemployment hovers at a 50-year low, which is fueling wage growth. Moreover, existing tariffs are raising costs for companies and consumers. I agree with the view of the Fed’s hawks that inflationary pressures are currently underestimated.

The upshot: You should boost the hedges sleeve of your portfolio to at least 25% of allocations. I define “hedges” as precious metals, real estate investment trusts (REITs), and commodities, among other investment classes. Your choices depend on your investment profile and how much risk you’re willing to shoulder.

Read This Story: Seeds of Wealth: Why Agriculture Is a Smart Bet

Also follow the general trend of the market toward value stocks. By investing in value stocks, you’re essentially buying a built-in gain and/or safety net. The smallest bit of good news can propel the stock up to a fair price. Even significant bad news doesn’t necessarily bring the price down. In many cases, the stock is undervalued because such bad news was already anticipated.

One industry that’s home to a slew of value plays now is marijuana. Pot stocks as a whole have taken a beating lately, which means several cannabis companies with bright futures are trading at bargain prices. For specific pot plays, consult our latest marijuana sector report.

Don’t flee the market. The bull still has legs. But if you see politicians on TV pontificating about trade progress, I suggest you change the channel.

John Persinos is the managing editor of Investing Daily. He also serves as editor-in-chief of Marijuana Investing Daily. Got a comment or question? Send him an email: mailbag@investingdaily.com