The Most Precious of Metals

Quick, can you name the South American country with the highest nominal gross domestic product (GDP) on a per capita basis? You might guess Argentina, given its democratic government and free market economy. Close, but Argentina ranks second with a per capita GDP of roughly $10,000.

Despite its reputation for political instability, for the past 30 years Chile has thrived as a representative democratic republic. As a result, its economy has zoomed to the top of the list while most of its neighbors have struggled to grow their economies.

Why does that matter to you? Chile is, by far, the top copper-producing country in the world. In 2018, Chile produced 5.8 million metric tons of copper. That amounts to more than a quarter of the world’s total mining output of 21 million metric tons. Copper accounted for half of Chile’s total exports last year. 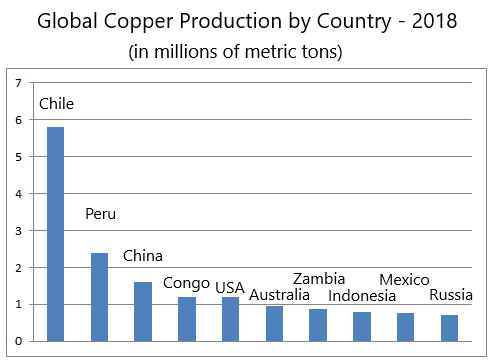 As my colleague Dr. Stephen Leeb explained last week, copper is integral to renewable energy. Dr. Leeb noted that “Copper’s superior ability to conduct both heat and electricity has made it vital in industries ranging from power to building materials.”

Also read: Copper: Set to Shine in 2020 and Beyond

If Dr. Leeb’s assumptions regarding future copper prices prove correct, Chile’s economy stands to grow at an accelerating rate over the next 10 years. Within a few years, Chile should surpass Panama as the top country in all of Latin America in per capita GDP.

Over the past two years, FCX has lost a third of its value as global commodity prices plunged. More recently, its share price has rallied from below $9 four months ago to $13 last week. The company is scheduled to release its Q4 and year-end results later this week.

Despite its stronger balance sheet and improving cash flow, shares of BHP have gained only 10% over the past two years as oil prices stagnated. However, for reasons I explained a few weeks ago, I expect oil prices to surge above $70 per barrel this year thereby benefiting BHP.

Unfortunately, you can’t buy shares of the world’s third-largest copper producer, Codelco. Codelco is a state-owned enterprise controlled by the Chilean government. Last year, it produced 9% of the world’s copper supply and is estimated to be sitting on nearly 20% of the world’s total copper reserve.

Of course, the so-called “smart money” on Wall Street is well aware of the world’s top copper mining companies. Nearly three-quarters of Freeport-McMoRan’s outstanding shares are held by huge institutional investors such as Vanguard and Blackrock (NYSE: BLK).

If you want to own the entire sector, the Global X Copper Miners ETF (COPX) offers a diversified portfolio of all the major mining companies. Over the past five years, its share price has gone nowhere as the price of copper has traded in a narrow range. 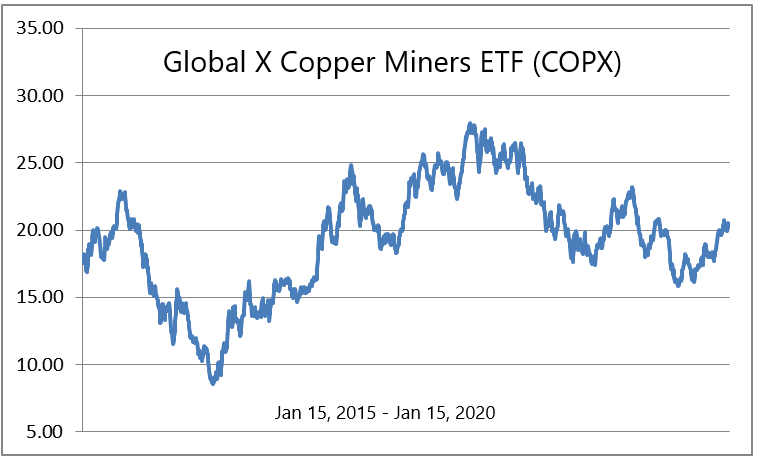 Asia, led by China at 49%, accounts for more than two-thirds of the world’s copper consumption. With one billion new middle-class consumers projected for China and India over the next decade, demand for copper will only increase.

For my money, the best investment opportunities will be in the less obvious names that stand to benefit from Chile’s booming copper industry. I don’t pretend to know what those are, but I know someone who does.

Dr. Leeb is chief investment strategist of Real World Investing. By his calculations, the price of copper going out five or more years will be far higher than almost anyone expects now. And that’s great news for the best-situated copper producers.

As I’ve just explained, copper is a crucial metal, yet most people have no clue about its extraordinary value. And right now, the world is running on a mere 10-day supply of copper reserves, held in warehouses around the globe.

When the supply of something we need is shrinking…and demand is exploding…prices are primed to soar. Want to score explosive gains? Click here for Steve’s under-the-radar copper play.