How to Play a Stock Market Correction

I have made no secret of my belief that mega-cap stocks are overvalued. By the end of last week, the SPDR S&P 500 ETF Trust (SPY) was back to breakeven for the year despite the coronavirus pandemic. In a moment, I’ll show you a trade I just made in my own account to cash in on a big drop in the SPY.

First, a quick explanation as to why I believe SPY is ripe for a pullback. Six weeks ago, I described “An Early Warning Signal for the Stock Market” that is based on three companies that are acutely sensitive to economic activity in China:

For the sake of brevity, I will refer to these three stocks as “BZY” for the first initial in each of their trading symbols. Earlier this year, these three stocks fell markedly, shortly before a similar-sized drop in SPY as shown in the chart below. 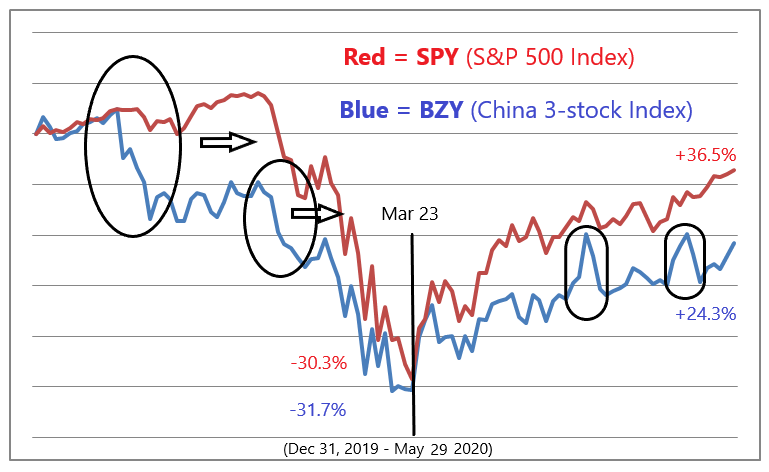 By March 23, both BZY and SPY had fallen by roughly the same amount. BZY was down 31.7% for the year while SPY had lost 30.3%. Since then, their behavior has been quite different.

At the end of May, BZY had rallied 24.3% while SPY was up 36.5%. That is a 50% differential in favor of SPY, suggesting the U.S. economy will be able to recover substantially faster than China’s.

Given the degree to which so many mega-cap stocks are dependent on China for their supply chain and/or customer base, I find that discrepancy difficult to reconcile. Hence, the trade I made in my own account last week.

In this case, I wanted to make a small bet with big upside potential so I chose an options trade. Options are highly leveraged, greatly amplifying the potential for gain (and loss).

As with all options, I had to first select the underlying security on which the option is based. Since I’m betting on SPY, I chose the iPath Series B S&P 500 VIX Short-Term Futures ETN (BATS: VXX).

Simply put, VXX tracks the direction of the CBOE Volatility Index (VIX). VIX is sometimes referred to as the “Fear Index” since its value goes up when demand for put options on SPY increases. A put option rises in value when the price of the underlying security does down.

Next, I had to choose an expiration date for my option. Since I believe a drop in SPY will occur within the next two months, I chose an expiration date of August 21. That leaves plenty of time for most S&P constituents to release their Q2 results, which I suspect will be worse than expected.

Finally, I must choose a strike price at which my option can be exercised. The day I bought my option VXX was trading near $32, so I chose the $30 strike price. I paid $6 for my option.

Since I bought a call option on VXX, its price will have to rise above $36 for this trade to be profitable. That could easily happen. When the stock market hit the skids back in March, VXX quickly surged above $78.

I’m not expecting a move of that magnitude this time. But I don’t need a huge move to double my money. All I need is for VXX to rise above $42. At that price, my option would have $12 of intrinsic value. That’s twice the $6 premium I paid for it.

The downside risk is that my option could become worthless. If SPY keeps going up, the value of my option will drop. If VXX falls below $30 by expiration, I would lose everything I paid for my call option.

I don’t think that is likely. During the past six weeks, BZY has briefly spiked only to fall back immediately. Meanwhile, SPY just kept going up as if nothing was wrong.

Watch This Video: The Calculus of COVID-19

I don’t like the idea of betting on the stock market to go down. In fact, I hold shares or call options on 20 companies in my portfolio. I view my trade on VXX as a short-term insurance policy to protect my portfolio from a stock market correction over the summer.

I’ll be the first to admit that I have a higher risk tolerance than do most other folks. You may prefer following a system that generates steady gains through all types of markets. If so, then consider following the advice of my colleague, Amber Hestla.

The team at Investing Daily makes you this bold promise: Over the next 12 months, if the gains from all of Amber’s winning trades don’t add up to at least 1,000%… Just let us know, and we’ll give you a second year of Profit Amplifier… absolutely free.