A month ago, I opined that inflated stock prices and low interest rates would soon result in a flurry of mergers and acquisitions (M&A) activity in the technology sector. As I noted then: “The economic environment has never been better to make a deal.”

Apparently, semiconductor chipmaker NVIDIA (NSDQ: NVDA) feels the same way. A few days ago, it announced that it will purchase the Arm Limited subsidiary of Softbank Group (OTC: SFTBY) for $40 billion.

Of that amount, up to $28 billion will be in the form of NVIDIA stock with the remainder in cash. After the transaction is completed, Softbank will own roughly 7% of NVIDIA’s outstanding common stock.

This is exactly the type of deal I was expecting. A year ago, NVIDIA was trading near $170. A few weeks ago, it peaked above $589 for a return of greater than 200% over the past 12 months. 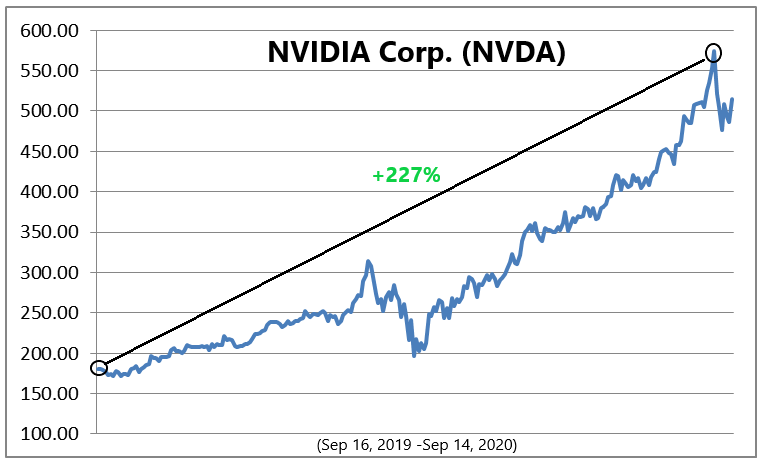 In essence, this deal (if approved by regulators) will cost NVIDIA almost nothing. NVIDIA’s market cap increased by $28 billion over the past month alone, fully covering the stock piece of the purchase price.

In addition, the press release claims that this transaction will be “immediately accretive to NVIDIA’s non-GAAP gross margin and EPS.” Usually, it takes at least two to three quarters for the financial benefits of an acquisition to start hitting the bottom line.

If true, then NVIDIA is risking very little by making this acquisition. That explains why its share price jumped more than 5% the day the deal was announced. Softbank popped nearly 8% at the same time. It appears that Wall Street believes both companies will become financially stronger as a result.

The tactical aspects of this transaction aside, it makes a lot of sense strategically, too. NVIDIA’s founder and CEO, Jensen Huang, elaborated on the immediate benefits of this marriage:

“Uniting NVIDIA’s AI computing capabilities with the vast ecosystem of Arm’s CPU, we can advance computing from the cloud, smartphones, PCs, self-driving cars and robotics, to edge IoT, and expand AI computing to every corner of the globe.”

While NVIDIA’s share price has nearly tripled during the past year, Intel has gone nowhere. INTC ended last week near $50, exactly where it was trading 12 months ago.

Similar to NVIDIA, Advanced Micro Devices has also more than doubled in value over the past year. However, with a market cap of $90 billion, it is not yet large enough to use its stock to buy a company the size of Arm.

That begs the question; might Intel and Advanced Micro Devices pull off a merger of their own? Their combined market cap is $300 billion, about the same size as NVIDIA.

Once an industry begins to consolidate, the pace of consolidation tends to accelerate. Now that Arm is spoken for, there may be a rush by NVIDIA’s rivals to lock up other chipmakers.

Of course, all of that assumes that regulators in the United States, Asia, and Europe approve NVIDIA’s purchase of Arm. Softbank is headquartered in Tokyo while Arm is domiciled in the United Kingdom.

I don’t expect that to be a problem, but you never know how election-year politics may influence those negotiations.

As a result of this deal, I expect to see an increase in the implied volatility for call options on tech stocks. In fact, it’s already happening in the semiconductor sector.

On the day this deal was announced, the January 15 call option at the $45 strike price on Western Digital (NSDQ: WDC) jumped 15% in price. WDC was trading near $38 at the time. For that trade to be profitable, WDC would need to rise above $47.

That equates to a 24% increase in WDC over the next four months. With a market cap of only $12 billion, acquiring Western Digital at a sizable premium to market value is well within reach of dozens of large tech companies.

The same is true of Western Digital’s longtime rival, Seagate Technology (NSDQ: STX). Coincidentally, Seagate also has a market cap of roughly $12 billion. An out-of-the-money call option on STX expiring in January also jumped 15% in price after the NVIDIA deal was made public.

That tells me that nobody knows which company will be the target of the next semiconductor sector M&A transaction. In that case, buying call options on all of them should ensure a big payoff on at least one of them.

However, there is a better way to trade options that is not based on guesswork. Consider the options trading strategies of my colleague Jim Fink, chief investment strategist of Velocity Trader.

Jim Fink is a millionaire and investing legend who has developed an options trading strategy that’s making his followers rich.