After successfully shoring up crude oil prices by curtailing production, the OPEC+ alliance has signaled its intention to reverse direction and ease production cuts. This opening of the spigots is planned despite the severe recession, weak energy demand, and the resurgence around the world of the coronavirus.

Crude oil prices recently have stabilized, after a period this year of unprecedented volatility. Now, OPEC+ is betting that economic growth in 2021 will be sufficient to boost energy demand and reduce inventories.

Are energy producers about to snatch defeat from the jaws of victory?

The question should concern all investors, because the energy sector and financial markets are intertwined. Another collapse in energy prices would weigh on the broader stock market, especially in light of still-excessive equity valuations.

Read This Story: Putting Overvalued Stocks to Work for You

BP (NYSE: BP) released a report last month that asserted demand for oil probably peaked in 2019 and may never fully recover from the devastating blow delivered by the coronavirus pandemic in 2020.

And yet, Russia’s Energy Minister Alexander Novak stated in an article published yesterday: “Currently, despite the second wave of the pandemic in a number of countries, my colleagues and I continue to be optimistic and expect we can gradually raise production.”

OPEC+ refers to the 13 official members of the Organization of the Petroleum Exporting Countries and 10 other non-OPEC partners including Russia. The five founding members of OPEC were Saudi Arabia, Venezuela, Iraq, Iran, and Kuwait. Saudi Arabia is the de facto leader.

OPEC+ agreed in April to reduce its combined oil production by 9.7 million bpd in response to collapsing demand due to the outbreak of COVID-19.

Easing production curbs in January could encourage a fresh round of the usual cheating by cartel members. As the Arabian proverb says: “If the camel once gets his nose in the tent, his body will soon follow.”

That would be regrettable, because producers finally seem to have tamed price volatility. After the April cuts were implemented, oil demand recovered and oil prices plateaued at roughly $40 per barrel (see chart). 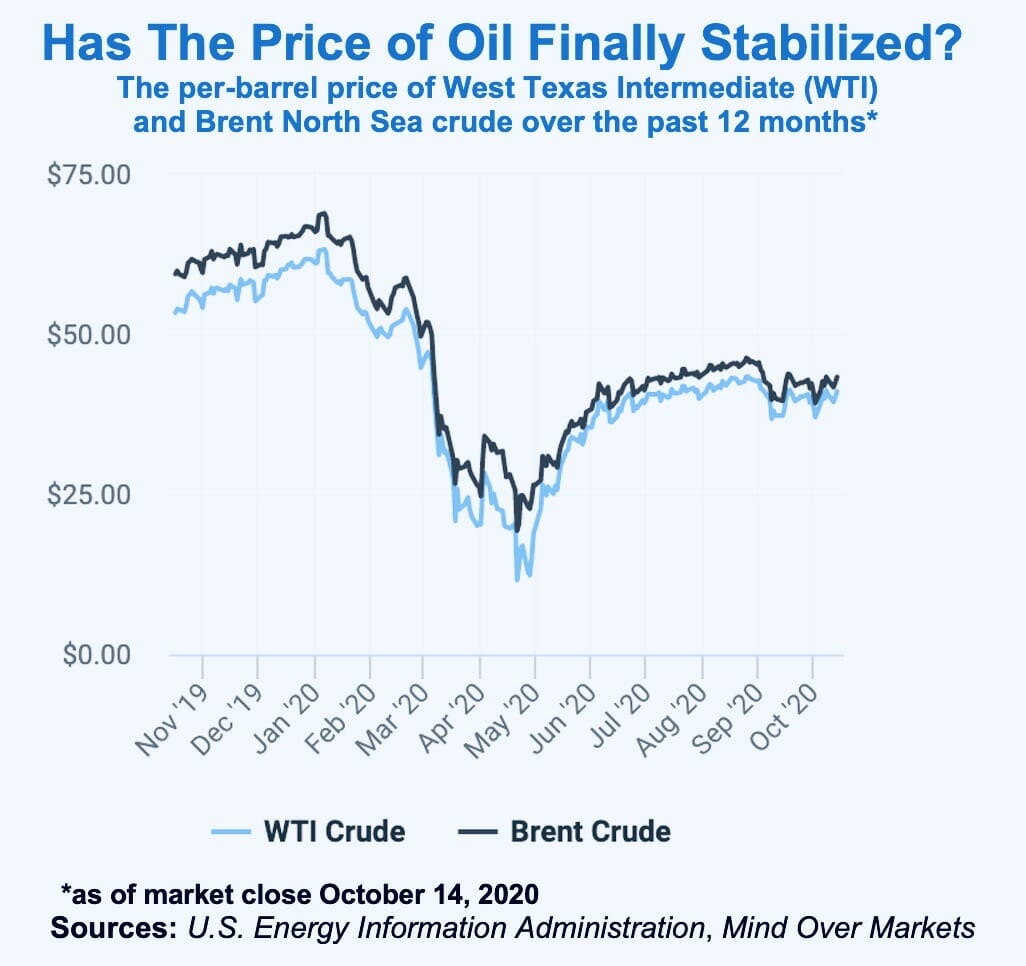 Under current economic conditions, can the oil market absorb another 2 million bpd of supply if OPEC+ eases the cuts? Probably not. The globe remains awash in an excess of crude oil and national economies struggle with recession and massive unemployment.

These numbers indicate the worst downturn since the Great Depression. In the second quarter alone, the U.S. economy shrank by 32.9% on an annualized quarter-over-quarter basis, the worst drop on record. How quickly the economy can grow in 2021 remains a wild card, especially as new fiscal stimulus remains stalled in Washington, DC.

Nonetheless, energy producers are eager to ramp up production again, because they’re starved for revenue. It’s the familiar boom-bust cycle, at a time when the world economy can ill afford another oil bust.

Once an unassailable juggernaut, OPEC+ this year has been roiled by internal spats and oil price wars that at one point in April drove the per-barrel price of West Texas Intermediate crude to nearly $40 below zero.

Cartel members have since put aside their differences (for now) and joined forces to implement production cuts. Remarkably, those cuts have stuck. Now, OPEC+ suggests that it wants to relax those cuts.

Meanwhile, U.S.-based energy “supermajors” are struggling and a wave of bankruptcies is roiling the U.S. shale patch.

Read This Story: The Lessons of Exxon Mobil’s Humbling Fall

In the first half of the year, 23 oil and gas producers filed for bankruptcy. These companies shoulder a combined debt of more than $30 billion. Amid the resurgence of new COVID-19 cases, the struggles of shale producers are likely to worsen.

Under these investment conditions, caution should be your stance. The energy sector, the global economy, and the equity markets aren’t out of the woods.

A veteran trader with decades of profitable trades under his belt, Jim is ready to reveal his trading system that makes money from the market’s imbalances.