The GOP Chills Out on Weed

Remember when revelations of marijuana use could wreck a politician’s career? Simply supporting decriminalization of marijuana could sink a political campaign.

I’m old enough to remember the 1972 presidential race between President Richard Nixon and George McGovern (D-SD). McGovern became known as the candidate of “amnesty, abortion and acid,” even though on the latter point, he only supported the decriminalization of marijuana. Many factors contributed to McGovern’s landslide loss, but his support of lifting restrictions on pot definitely hurt him with middle America.

How times have changed. In the bitterly polarized Trump era, the mainstreaming of marijuana has become a unifying goal. Democrats and Republicans, ordinarily at each other’s throats these days, are finding common ground on weed. (Even LSD, aka acid, is enjoying political favor at the state and local levels.)

That’s all great news for investors. Each new piece of state or federal legislation that removes strictures against pot also acts as a catalyst for a rise in cannabis equities. Legalization creates new markets, new customers, and new profits. For marijuana investors, the political trend is your friend.

Latest case in point: The Senate on Tuesday night passed legislation designed to promote medical studies into the effects of marijuana. The move comes one week after the U.S. House passed similar cannabis research legislation. The two bills must now be reconciled in committee and sent to the president for his signature.

Even if there isn’t enough time in the waning days of December to get the bill to President Trump’s desk, it’s almost certain that Joe Biden would sign the bill after he assumes office January 20.

The Cannabidiol and Marijuana Research Expansion Act, which was introduced in 2019, enjoys bipartisan support and was advanced in the Senate on Tuesday by unanimous consent. It’s notable that Republicans who are typically resistant to marijuana legalization got firmly behind the bill.

The bill’s core function would be to simplify and expedite the application process for researchers who want to study marijuana. The aim is to encourage the Food and Drug Administration to become more willing to develop and approve marijuana-based medicines.

The bill would clarify that physicians are allowed to discuss the risks and benefits of marijuana with patients and require the U.S. Department of Health and Human Services to submit data on the health benefits of weed.

Lead sponsors of the bill are Sens. Dianne Feinstein (D-CA), Brian Schatz (D-HI) and Chuck Grassley (R-IA). Grassley, a staunch conservative, said that the “bipartisan bill is critical to better understanding the marijuana plant and its potential benefits and side effects.”

Passage of the measure in both the House and Senate underscores the enormous political and legal progress that marijuana has made this year.

Read This Story: Cannabis 2020: The Year in Review

A new poll of voters in the four states (AZ, NJ, MO, and SD) that legalized marijuana last month found that a decisive majority believe federal cannabis legalization is “inevitable” and that it’s an issue “both liberal and conservative voters can get behind.”

A majority of the 1,602 people who were surveyed from November 5-8 said marijuana legalization in the United States is only a matter of time (see chart). 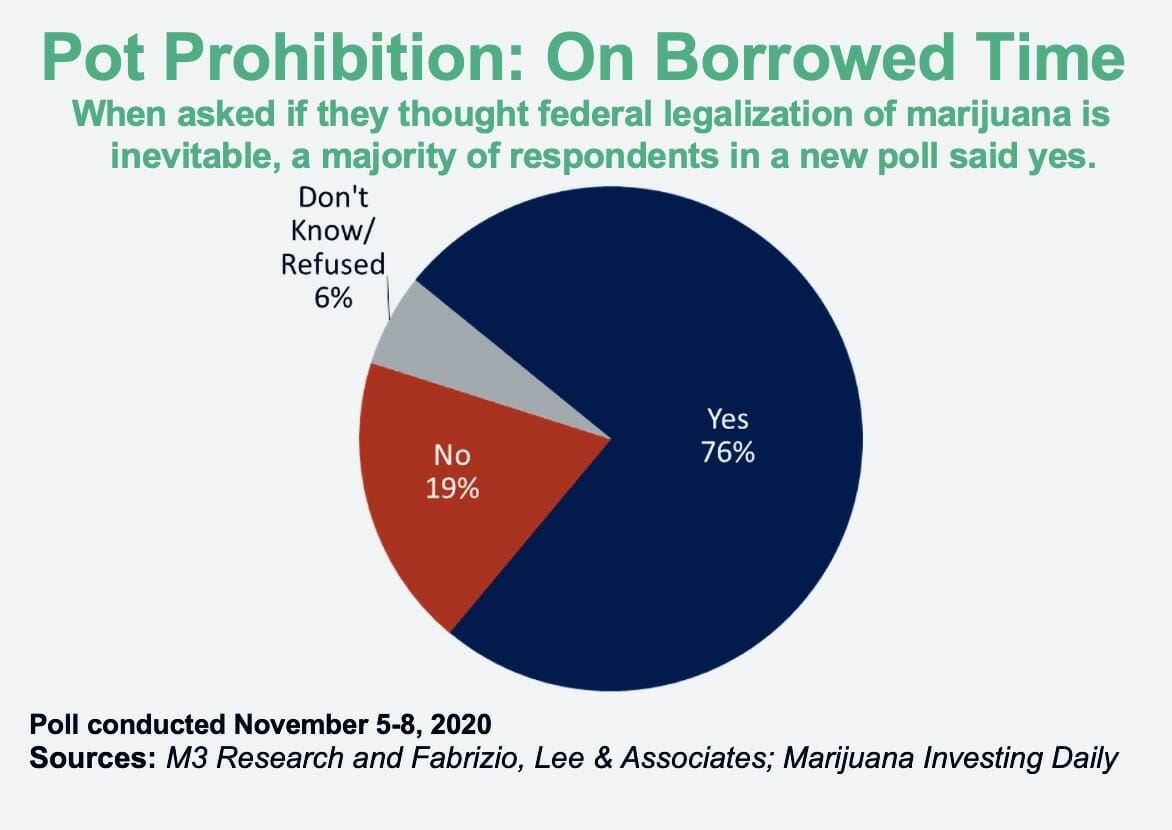 Overall, a majority said they favored legalization, by a margin of 68% to 28%. Republican politicians who formerly opposed the mainstreaming of marijuana are shrewd enough to read the polls…and they’re starting to vote accordingly.

M3 Research and Fabrizio, Lee & Associates conducted the poll on behalf of the pro-legalization New Approach PAC. The polling firm released the results on Monday, with this commentary in a memo:

“In sum, public opinion in the four states that legalized marijuana this fall shows a pattern of shifting opinions that bodes well for marijuana policy reform across the country. Support for legalization in principle has become broad, strong, and bipartisan, reflecting a steady positive shift in perceptions of voters of all parties over the last few years.”

As I’ve just made clear, the political winds are blowing in marijuana’s favor. Congress is increasingly friendly toward marijuana. On January 20, the country will get a new administration that’s also predisposed to legalizing pot.

For investors, the timing couldn’t be better. Our investment team just uncovered an under-the-radar cannabis company that’s set to surge in 2021. Click here for details.