It sounds like the set up to a bad joke: billionaire Charles Koch, rapper Snoop Dogg, and legal reformer Weldon Angelos.

But it’s no joke. Those three disparate personalities recently joined forces to push for marijuana legalization, yet another sign that weed is part of mainstream society.

Many indicators reveal when a fledgling, disruptive industry has finally achieved big league status. When it comes to marijuana, I point to the announcement last Tuesday that Koch, Dogg and Angelos have formed the Cannabis Freedom Alliance. The idea was born during a Zoom conversation between the three men, neither of whom is a stranger to publicity.

The alliance includes Americans for Prosperity, the right-wing political lobbying group founded by the Koch brothers; the Reason Foundation, a libertarian think tank; the marijuana advocacy outfit the Global Alliance for Cannabis Commerce; and The Weldon Project, a nonprofit that’s working for criminal justice reform and to turn back the War on Drugs.

Social media has been abuzz (so to speak) about the news, as this tweet attests: 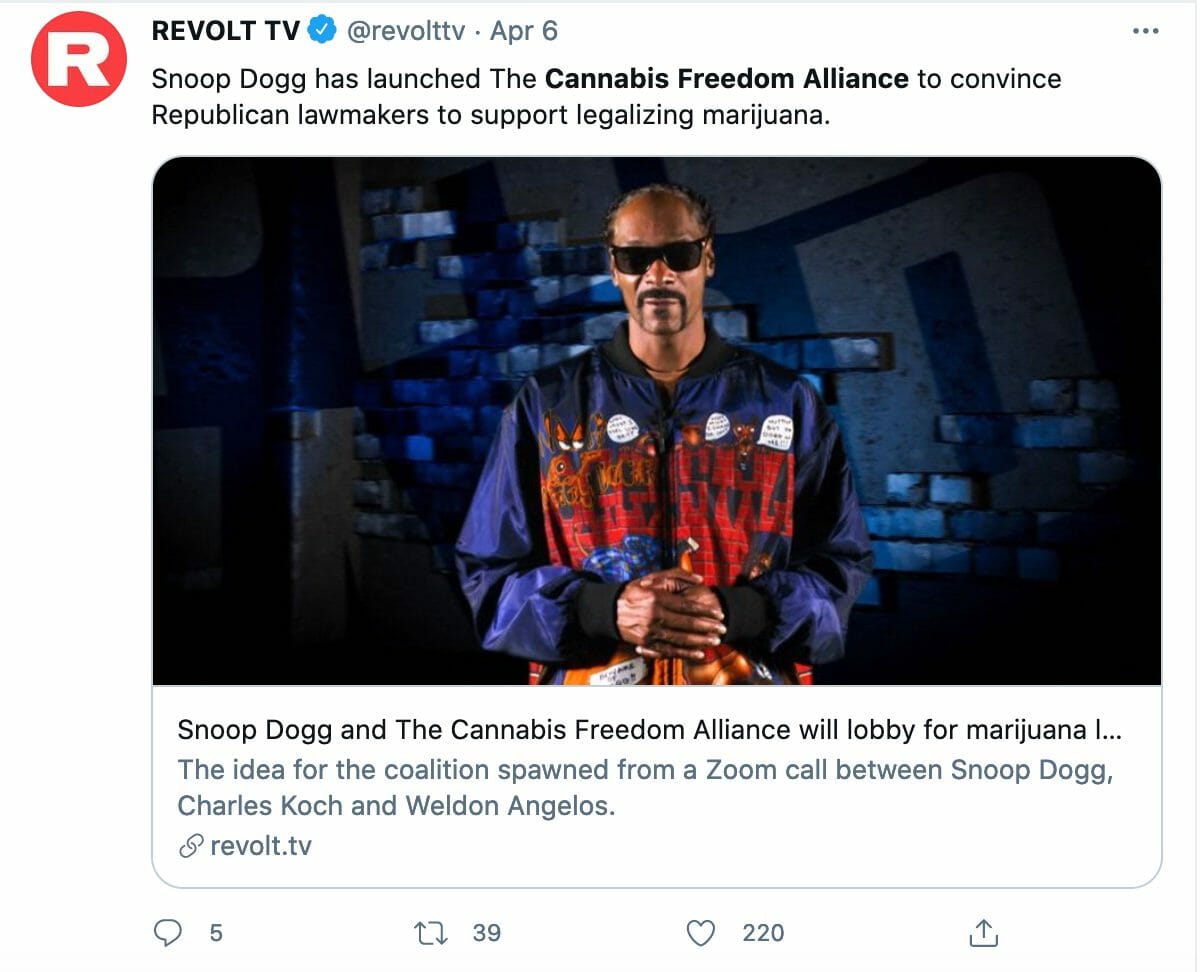 In announcing the formation of the alliance, Weldon Angelos stated:

“Ending cannabis prohibition and incarceration is a moral imperative. For too long, cruel laws punishing non-violent cannabis offenses have destroyed the lives of individuals throughout this country, myself included. It is high time that Congress and the President right this wrong and allow those harmed by cannabis prohibition the chance to participate in the cannabis industry like the millionaires and billionaires doing so now. But we can’t do this alone. We need both sides to come together on this, which is why we launched this coalition.”

Angelos was a music producer sentenced to prison for 55 years (yep, 55 years) for selling $350 worth of marijuana to a police informant. Mandatory guidelines called for the draconian sentencing, because Angelos allegedly was carrying a gun during the drug transactions. In 2016, after serving 13 years of his sentence, Angelos was released from prison thanks to a broad-based, celebrity-studded effort on his behalf.

Koch, Dogg and Angelos. Strange bedfellows. But it’s part of a trend that bodes well for marijuana investors.

Marijuana has long been associated with the political left. It remains true that most Republicans, especially those in Congress, oppose marijuana legalization. Typically, the more socially liberal Democratic party has championed cannabis as well as criminal justice reform.

However, an increasing number of Americans favor pot legalization. And in marijuana-legal states, the industry is generating a considerable amount of new jobs and tax revenue. Key conservatives are changing their minds.

The road to Damascus…

I point to the conversion of John Boehner.

Former U.S. House Speaker Boehner left Congress in 2015. In recent years, he has become an advocate for the legalization and commercialization of pot, a substance that he once demonized.

Boehner, age 71, served nearly five years as speaker. A conservative Republican from Ohio, he isn’t exactly a hippie. The perpetually suntanned Boehner is famous for chain-smoking Camel Ultra Lights, avidly playing golf, and in the after-hours swirling Merlot wine. The press has often referred to him as the Dean Martin of DC.

In 2011, Boehner told a constituent he was “unalterably opposed” to legalization. But in 2018, he joined the board of advisers of Acreage Holdings (OTC: ACRZF), a small cannabis corporation based in New York City.

These days, Boehner frequently holds forth at conferences on the wisdom of investing in cannabis. He’s also been in the news this week, as he promotes a new book. Also on Acreage’s board is former Republican Governor of Massachusetts Bill Weld.

Fact is, going back decades, there’s precedent for influential Republicans to oppose the banning of marijuana. In 1972, William F. Buckley Jr., the conservative columnist and editor, announced that he favored removing criminal penalties against the use of marijuana. That year, his magazine National Review bore this headline on the cover: “The Time Has Come: Abolish the Pot Laws.”

The Cannabis Freedom Alliance’s top priority is to ensure passage of the Marijuana Opportunity, Reinvestment and Expungement (MORE) Act.

The MORE Act would federally deschedule cannabis (i.e., lift the federal criminal ban) and expunge the records of those with previous marijuana convictions. The U.S. House last December passed the MORE Act, but few Republicans voted for the bill. MORE currently sits before the Senate, where the Democrats are now in charge.

The alliance intends to target libertarian-minded GOP Senators who could be persuaded to vote yes on MORE. President Joe Biden has indicated that he would sign the bill, if it reaches his desk.

In my view, it’s only a matter of time before MORE finally becomes law. When it does, quality marijuana stocks are likely surge. Looking to make money on the marijuana trends I’ve just described? Click here for our special report on pot investing.

PS: Keep an eye out for an exciting offer from Investing Daily. It’s “the next big thing” from our colleague Robert Rapier, chief investment strategist of Utility Forecaster.