Brother, Can You Spare a Bitcoin?

The millennial members of my family frequently bombard me with unsolicited advice about cryptocurrency. They’re enraptured with crypto and they’re puzzled as to why I haven’t jumped onto the bandwagon.

So where does a cantankerous skeptic like me stand on cryptocurrency? Let’s take a break from the market’s daily ups-and-downs to address the hot topic of crypto. We’ll start with the views of Warren Buffett and Charlie Munger, two of the most successful investors on the planet.

Berkshire Hathaway’s (NYSE: BRK-A, BRK-B) 2021 Annual Shareholders Meeting took place on Saturday, May 1. The annual meeting is often referred to as “The Woodstock of Capitalism.”

I watched last Saturday’s event, as it was live streamed on the Internet. Instead of the usual location of Omaha, it was held this year in Los Angeles because of the pandemic. Berkshire Hathaway Chairman and CEO Warren Buffett and Vice Chairman Charlie Munger were bullish about the overall economy’s prospects, but they took the opportunity to harshly criticize cryptocurrency.

In particular, Munger attacked Bitcoin (BTC) during the Berkshire meeting, calling it “disgusting” and “contrary to the interests of civilization.” He said cryptocurrencies in general are “useful to kidnappers and extortionists.”

Many hipster entrepreneurs would beg to differ. A highly vocal proponent of crypto is Elon Musk, CEO and founder of electric vehicle maker Tesla (NSDQ: TSLA). Musk has made substantial investments in Bitcoin and his company now accepts it as payment for products. (We’ll see if the eccentric billionaire stars in a crypto-themed sketch when he hosts Saturday Night Live on May 8.)

A quick refresher course. Cryptocurrency is digital currency, a type of money that lives only on the Internet. Created in 2008 by an unknown person or group of people using the pseudonym Satoshi Nakamoto, Bitcoin was the first cryptocurrency and it remains the largest.

People with an anti-establishment, pro-crypto sensibility spawned by the 2008 financial crisis are often referred to as “Generation Crypto,” or Gen C. Some of these digital rebels also call themselves “cyber-punks.” (I’m already bracing myself for the inevitable hate mail.)

“Altcoins” are crypto alternatives to Bitcoin and they’re proliferating at a rapid rate. Bitcoin and altcoins are decentralized and unregulated, meaning that no bank, not even the Federal Reserve, can control how many coins are in circulation or set new rules. The number of coins is strictly limited by math, with the number growing at a steady but slowing rate.

Every cryptocurrency is supposed to be linked to a “blockchain,” which is a distributed computer-generated database of all transactions that have ever taken place in the currency. Altcoins share characteristics with Bitcoin but are distinct in certain ways. For example, some altcoins use a different consensus mechanism on the blockchain to validate transactions.

Bitcoin and altcoins are dependent upon a highly encrypted algorithm which, at least theoretically, makes them impossible to manipulate.

An increasing number of major businesses are accepting crypto as payment. Analysts estimate more than 5,000 cryptocurrencies are currently in existence. The values of Bitcoin and the major altcoins have been soaring (see chart). 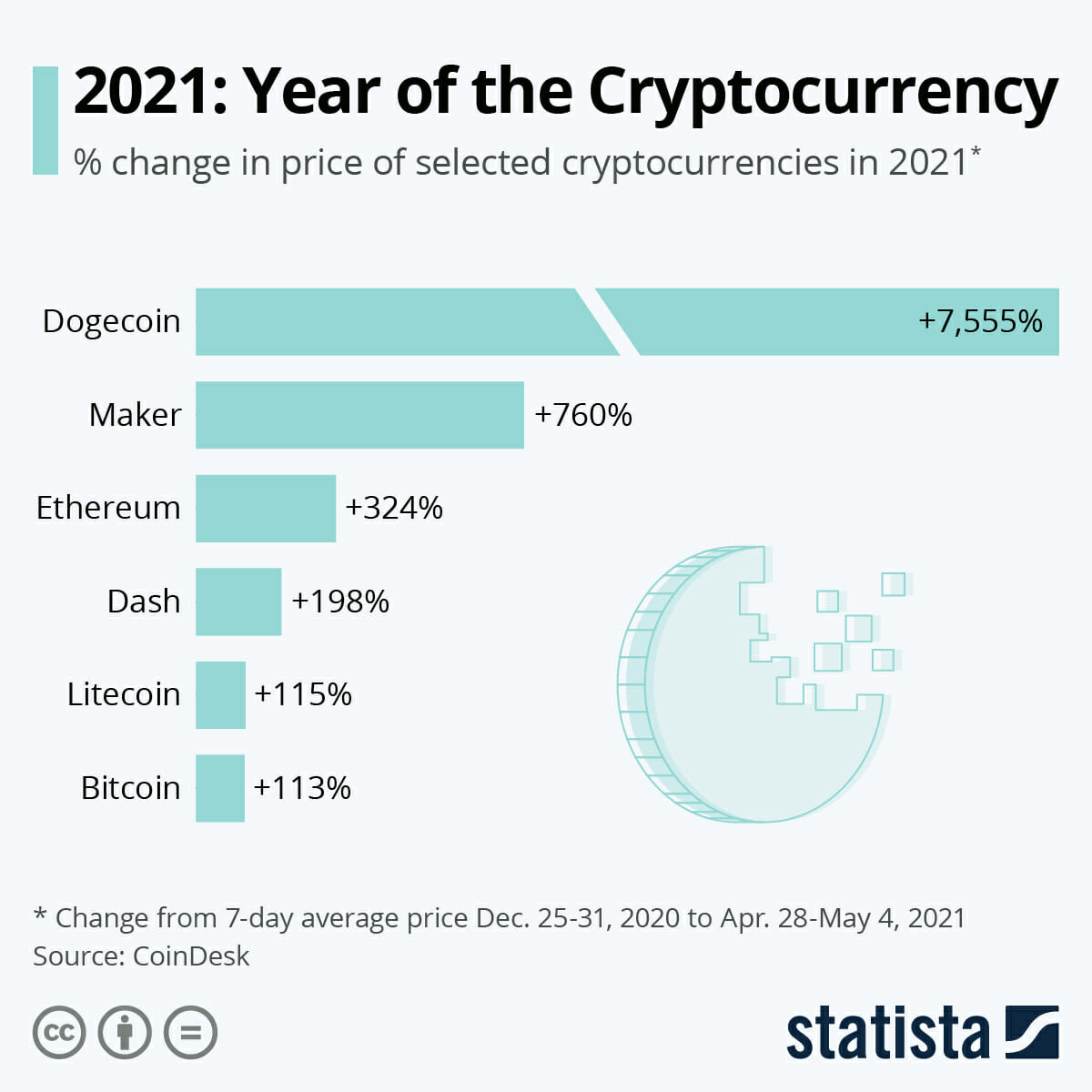 As you can see, cryptocurrencies are racking up exponential gains. But the frenzy reminds me of Internet stocks in 1999, when the valuations of inherently weak companies reached nosebleed heights. Back then, analysts assured investors that lack of revenue and earnings didn’t matter because the technology was so compelling. We know how that turned out. The dot.com bubble burst in 2000.

Given all the recent revelations about cyber hacking and the surveillance state we seem to live in, it’s not hard to see why Bitcoin and altcoins would appeal to some people. Crypto isn’t subject to the whims of central bank policies and remains next to impossible to confiscate, resulting in a more secure store of value (supposedly) than gold.

Regardless, I look askance at cryptocurrencies. Their volatile price gyrations undermine their credibility as currencies. Real currencies typically have relatively stable values, making them reliable units of exchange.

Cryptocurrencies also operate under the constant threat of a newer “disruptive” technology coming along to make them suddenly obsolete.

And few people truly understand how cryptocurrencies work. They’re wrapped in techno-jargon and seem to operate in nebulous ways. One of the sacred rules of investing is to never put your money into an investment you don’t understand.

Cryptocurrencies don’t represent anything tangible. They’re worth money because of the cult-like faith of their adherents. Several credible Wall Street analysts have referred to cryptocurrencies as “Ponzi schemes.”

One potential risk is that governments, including our own, could move to outlaw these currencies. In 2018, China officially banned all crypto-related commercial activities, a reminder that cryptocurrencies exist by the grace of government acquiescence.

Unless you have a strong stomach for volatility and potentially big losses, there are better and safer places to put your money. If you’re determined to profit from the crypto craze, consider “pick-and-shovel” plays on the underlying technology.

Money-making potential lies in the private enterprise market for blockchains. Blockchains have other uses than currency. They let businesses store encrypted data in a ledger, for a host of practical purposes.

Read This Story: The Smart Way to Play The Crypto Craze

There’s another related trend that’s worth your investment dollars: the rise of cashless payment systems. The cashless society is achieving new heights once only imagined in science fiction.

During the pandemic, quarantined consumers got accustomed to mobile cashless payments, more than ever before, because of lockdowns and social distancing. As COVID restrictions ease and consumers get more confident, this development will accelerate. If you want to invest in the New Digital Economy, providers of cashless payment systems are far safer bets.

Once the coronavirus is finally vanquished, the cashless payment segment will explode on the upside. After months of research, we’ve unearthed a company that’s the leader in cashless technology, but remarkably, most investors have never heard of it.

The time to invest in this little-known company is now, before the herd catches on and bids up its shares. This stock is suitable for any generation of investor, “crypto” or otherwise. For details, click here.