Cannabis Comes to the Cotton Belt

Alabama on May 17 became the latest state in the nation and second in the Deep South (after Florida) to legalize a medical cannabis market. Gov. Kay Ivey (R) signed the legalization bill into law, about two weeks after the legislature approved it. Recreational marijuana remains illegal in Alabama, although efforts are underway to change that, too.

The trend of Southern states legalizing marijuana represents a cultural transformation. The region is known for being socially conservative and historically repelled by anything that smacks of the counter-culture. I remember as a youngster, watching aghast as television news showed Southerners burning Beatles records because John Lennon had compared the Fab Four to Jesus. (His words were misinterpreted, but the damage was done.)

And nowadays? In some Southern cookbooks, you can find recipes for pecan pie infused with cannabis.

The rise of the New South…

During the Civil War, of course, the Confederate government was located in Richmond, Virginia. Now that capital city is generating some of the most liberal drug laws in the country.

On April 7, Virginia became the first southern state to legalize recreational marijuana. Adults age 21 and older can possess and cultivate small amounts of the drug starting July 1. Virginia already had passed one of the country’s first medical marijuana laws, back in 1979.

Other Southern states, including Mississippi, Georgia and South Carolina, are considering various marijuana legalization measures. The Cotton Belt, the Bible Belt, Dixieland…whatever you want to call the region, it’s embracing a substance that it once demonized almost as much as General Sherman.

Alabama this week joined 36 other states in allowing medical marijuana. It adds up to huge potential nationwide revenue…and investment profits.

According to a new report released May 17, the medical marijuana market is growing faster than anyone predicted, especially as its use spreads to newly legalized markets.

New Frontier Data’s latest report, Medical Cannabis & Pharmaceuticals: Growth & Disruption in U.S. Healthcare, examines how medical consumers are integrating cannabis into their health and wellness regimens and sometimes using it as an alternative to conventional pharmaceuticals. 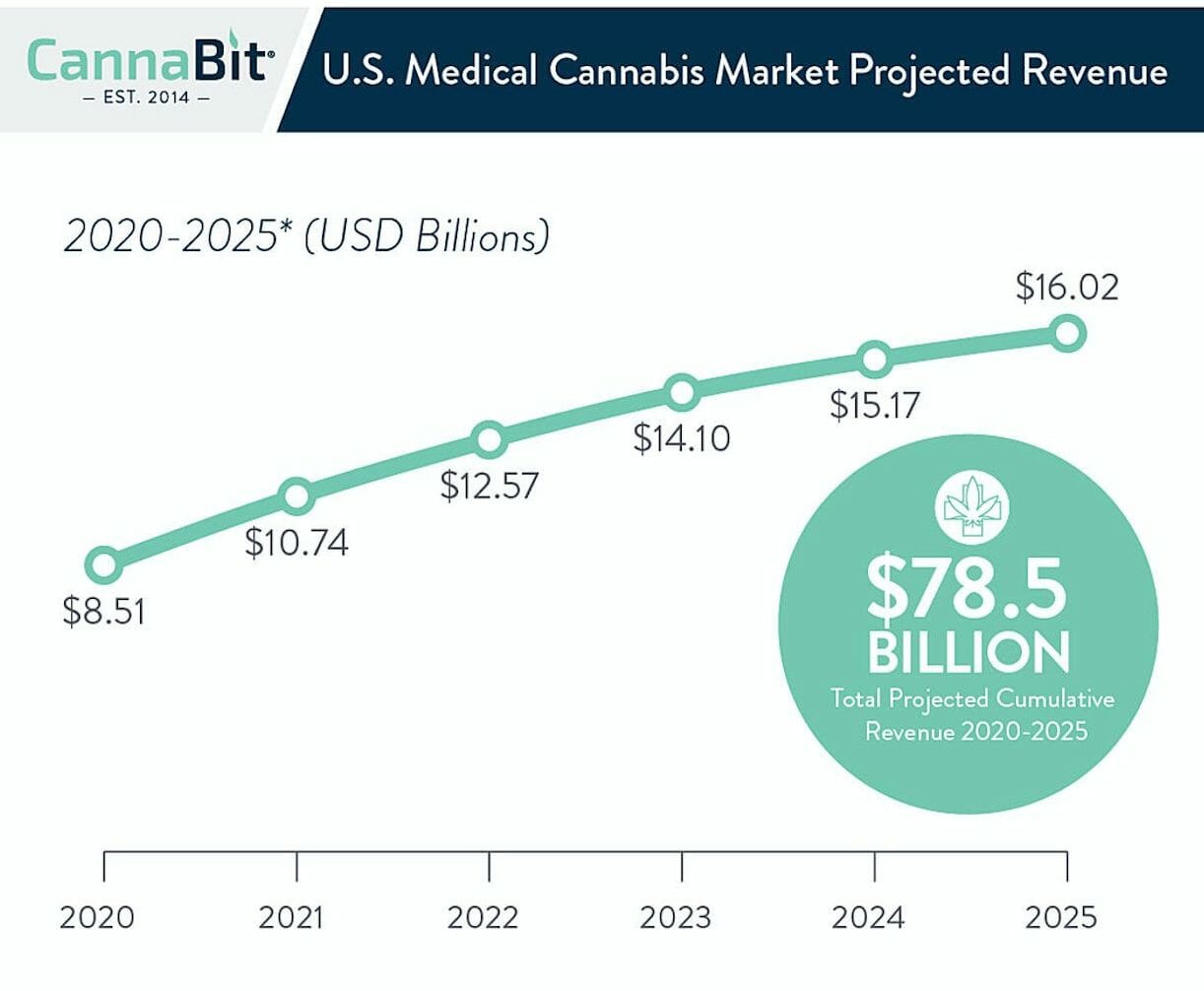 Medical marijuana consumers on average spend more per month on cannabis than do adult-use (i.e., recreational) consumers: $298 per medical consumer, versus $278 per adult-use consumer.

Read This Story: Medical Pot: Haven’t Got Time For The Pain

The marijuana boom has provided windfalls in state tax revenue, prompting officials to impose a growing roster of marijuana taxes and fees. As state governments get accustomed to marijuana money filling their coffers, there’s no turning back.

Florida, with its growing population of retired baby boomers and easy-going subtropical culture, is a thriving mecca for marijuana companies. Cannabis sales are growing quickly throughout the U.S., but medical pot demand is especially strong in the Sunshine State.

Through passage of a 2016 ballot initiative, Florida became the first Southern state to legalize medical marijuana. Recreational pot remains illegal in the state, although strenuous efforts are underway to legalize it.

Between 2020-2025, Florida is expected to generate a cumulative $14.5 billion in consumer revenue from medical marijuana.

Similarly, states with smaller but still substantial markets, such as Oklahoma and Pennsylvania, are projected to enjoy growing consumer revenue from their medical cannabis markets ($8.7 billion and $7.8 billion, respectively, over the five-year period).

Medical marijuana is revolutionizing health care and threatening the power of Big Pharma. At stake are billions of dollars. It’s clear that cannabis investments are a must for your portfolio. For our latest research on the most profitable pot stocks, click here.

Another disruptive trend in the health care industry is telemedicine. Due to quarantine restrictions generated by the coronavirus pandemic, an increasing number of people are resorting to remote medical consultations.

According to a new report from Grand View Research, the global telemedicine market is expected to generate revenue of $298.9 billion by 2028, for a compound annual growth rate of 22.4% from 2021 to 2028.

We’ve pinpointed the best plays on telemedicine. The time to invest in these little-known companies is now, before the herd catches on and bids up their shares. For details, click here.