Has Warren Buffett Lost His Mind?

Last year, Warren Buffett’s Berkshire Hathaway (NYSE: BRK.A, BRK.B) purchased a 5% stake in each of five Japanese trading companies. The companies (Itochu, Marubeni, Mitsubishi, Mitsui, and Sumimoto) are part of a group known as “soga sosha,” which means companies that trade in a broad range of products and materials.

In all, Berkshire shelled out around $6 billion, a small sum relative to its size and holdings. Still, these are Buffett’s largest purchases since the pandemic started, and he’s said he may eventually raise his stake in them to 9.9%.

The companies are broad-based both geographically and in their business lines. They trade commodities and have ownership positions or stakes in areas ranging from hospitals and financial companies to infrastructure development and logistics.

But on balance, these firms haven’t been stellar market performers. Only one has managed total (not annualized) double-digit growth over the past decade, while two had negative growth. On average they have sharply underperformed benchmarks of Japanese stocks.

So what attracted Buffett? Some analysts say the stocks are great value plays, others say maybe 90-year-old Buffett has lost some of his marbles. The stocks do trade at low valuations as measured by price-to-book value and free cash flow yields. But as Berkshire’s own unmatched long-term record shows, value investing requires more than looking at a few metrics. Going strictly by their performance, you could argue the stocks are value traps, not value plays.

However, before concluding Buffett has lost it, realize the world has changed a lot in the past generation. These changes give the trading companies relevance Buffett might well have perceived. The century began with the U.S. as the world’s undisputed hegemon. Since then, as the world opted for relatively free trade, international trade has become by far the largest driver of world growth. While global gross domestic product (GDP) has grown by less than 80%, world trade has tripled.

China has been the biggest beneficiary. You can argue that China gamed the system by subsidizing state enterprises to give them an unfair advantage in exports. On the other hand, if China hadn’t been able to ramp up growth when the world so desperately needed it, the entire global financial edifice might not have survived the 2008-2009 financial crash. And today you could argue that Chinese and Asian growth during the pandemic has similarly rescued the world’s economy.

Read This Story: Red Dragon Rising: The Profits and Perils of China

China’s rise has presented the U.S. with a clear rival for world leadership. The U.S. has reacted by tightening the rules that govern trade. Donald Trump put tariffs in place and his successor Joe Biden so far has kept them.

The problem, though, is that if we choke off the free flow of goods among countries, we could find ourselves in real trouble and lacking elements essential to our industries that we ourselves don’t produce.

The table lists commodities and minerals critical to both U.S. industry and the military in which we depend on other countries for much and in some cases all of our needs. The second column indicates the percentage of our needs in these materials we have to import. 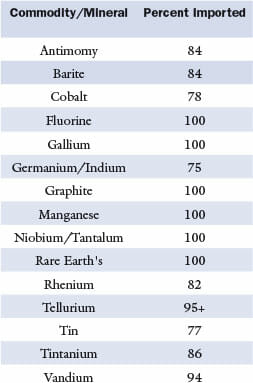 One of the critical commodities is rare earths, metals essential to make the most powerful permanent magnets. Without these magnets, the U.S. would be unable to produce most computer-based products as well as some advanced military products, or at best we could produce only inferior versions. China completely dominates the production, refining, and distribution of rare earths.

So far China, which also controls materials like graphite, needed for lithium ion batteries, hasn’t restricted exports. But if current trends against free trade and animosity between the two countries worsen, that could change, putting the U.S. in a serious bind.

These tensions even could affect trade, especially between East and West, in commodities like copper and zinc. If the world wants electric vehicles (EVs) to be as widely adopted as the rosy forecasts predict, we will need a lot of many different materials.

Linking the East and West

Enter the Japanese trading companies. They could play a major role. These Japan-domiciled firms are ideally positioned to be links between East and West, especially in the trading of critical commodities and basic commodities like liquefied natural gas (LNG), oil, and base metals.

A recent comment on the companies from a Japanese corporate trade publication states that “far less has been reported about how deeply the sogo shosha have established themselves in mineral holdings generally, and rare metals in particular…the trading companies have one of the best perspectives…related to metal market movements.”

The importance of commodities and minerals in technology and infrastructure cannot be overstated. These companies’ focus on logistics positions them to profit from trading in commodities, but that’s just the start.

Of course, don’t forget about the companies that produce these critical materials that are poised to see a strong demand boost. We’re especially excited about the profitable potential of lithium miners.

Lithium is among a slew of commodities that are poised for huge price gains as demand for commodities explodes. Global infrastructure projects also will boost the need for lithium.

Lithium is crucial for a variety of industrial applications. The biggest growth driver for lithium is demand for lithium-ion batteries used in EVs. For details about America’s number one lithium play, click here now.