The EV Stock Nobody Is Talking About…Yet

Last week, I noted the remarkable turnaround in General Motors (NYSE: GM) since announcing its plans to move aggressively into the electric vehicle (EV) market. As of last week, GM had gained 41% this year while Tesla (NSDQ: TSLA) was up only 11%.

I concluded that if growth fund manager and Tesla major shareholder Cathie Wood, “really wants to put her money in the next big EV stock, perhaps she should set her sights elsewhere.” And by elsewhere, I don’t mean California, Texas, or Detroit.

In last week’s article, I included a chart that compared GM’s stock market performance this year with Tesla’s. Below, I have added a third automaker to the chart to compare its performance to those two. 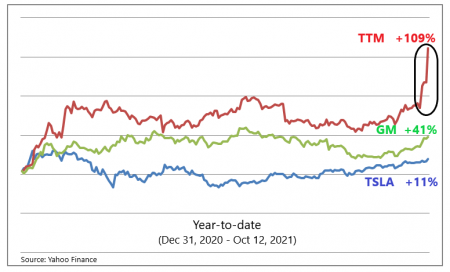 As you can see, neither GM nor TSLA have performed nearly as well as India-based carmaker Tata Motors (NYSE: TTM) this year. Through last week, TTM has appreciated 109% in 2021. That’s nearly 10 times better than TSLA!

If you are not familiar with Tata Motors, that’s understandable. The company does very little business in the United States under its own name. However, it sold more than 31,000 cars in North America through its Jaguar Land Rover (JLR) division during the quarter ending June 30.

That was a 50% improvement over the previous quarter. That’s good news, but it is not the reason why TTM stock has doubled this year.

The explanation for that was made clear on October 12. That morning, Tata announced it received nearly $1 billion from two private equity firms to expand its EV production capabilities.

Combined with its own money, Tata will invest $2 billion to expand EV production over the next five years. The company will be guided by the four principles of its “Project Helios” growth strategy, which entails blanketing India with Tata EV dealerships and charging stations.

Tata realizes that it has a gold mine in its own backyard. With a population of 1.4 billion people, India is roughly four times bigger than the U.S. and only slightly smaller than China.

In the past, Tata has focused on building small, inexpensive vehicles to make them affordable to India’s working-class population. But as that group ascends into middle-class consumerism, they want (and can now afford) pricier automobiles.

If Tata had waited any longer, it risked allowing a foreign-owned carmaker to usurp its local advantage in India. By making this move now, Tata is assured of retaining the inherent social and political advantage of being India’s national automaker.

Meanwhile, Tesla will be competing with General Motors, Ford (NYSE: F), and Volkswagen (OTC: VWAGY) for EV supremacy in the U.S.

Watch This Video: Baby, You Can Drive This Stock

All of these vehicle makers bring substantial resources to the fray and none of them plans on finishing in second place. They can’t count on China to bail them out.

Similar to India, China’s EV market is dominated by a domestic automaker, Nio (NYSE: NIO), which is partly owned by the Chinese government. Care to guess which EV manufacturer will not be paying big import tariffs on the cars it sells in China?

We know which companies will most likely be the primary beneficiaries of China’s and India’s conversion to EVs. However, it is much tougher to say who the ultimate winner(s) will be in other parts of the world. Betting on just one of them, such as Cathie Wood is doing with Tesla, could end up being a costly mistake.

A less risky way to participate in the growth of the EV market is to buy shares of First Trust NASDAQ Global Auto Index Fund (CARZ). General Motors is the largest of the fund’s 34 holdings at 9.4% of total assets. Tesla and Ford are also among the fund’s top 10 holdings.

I first recommended CARZ in April 2020 as “A Sector Turnaround Play That Could Hit The Gas.” Since then, it has more than doubled in value.

Now, I like CARZ for a different reason. Even though it was not originally designed as a play on the EV market, effectively that is what it became on July 19. That’s when the fund’s manager announced that CARZ will track the S-Network Electric & Future Vehicle Ecosystem Index going forward.

Over the remainder of this decade, EV sales are projected to grow from 3.4% of all new car purchases this year to 29.5% in 2030. The same automakers that sell the most EVs will also become the top holdings of CARZ.

Owning a diversified fund such as CARZ is one way to participate in the explosive growth of the EV market. But I know of another way that could be much more lucrative.

Our favorite play on EVs is lithium. That’s right, lithium.

A silver-white metal, lithium is among a slew of commodities that are poised for huge price gains as demand for commodities explodes.

Lithium is crucial for a variety of industrial applications. The biggest growth driver for lithium is the demand for lithium-ion batteries used in EVs. Lithium is the ultimate pick-and-shovel play, because no EV maker can do without it. For details about the most promising lithium investment, click here now.