Relax, Investors: The End Is Not Nigh

As the Russia-Ukraine war drags on, I’ve noticed a proliferation of special reports that provide advice on how to position your finances for a possible apocalypse (invest in food and water production, cryptocurrencies, etc.).

I turn your attention to George C. Parker, an American con man who repeatedly “sold” the Brooklyn Bridge (in the form of purported toll booth rights) to gullible immigrants. He was convicted of fraud in 1928 and died in prison. Parker’s story gave rise to the popular expression: “If you believe that, I have a bridge to sell you.”

Apocalypse investing? Mr. Parker would have been impressed with this brazen level of bamboozlement.

Don’t buy into all of the “Putin is crazy enough to start WWIII” alarmism. Such fears are pointless. The demise of civilization would by definition mean the demise of finance as we know it. Ignore the prophets of doom and just stick to your long-range investment strategy.

Below, I’ll point you in the direction of a hot investment trend that’s unfolding regardless of the hyperbolic headlines and fear-mongering.

The staying power of stocks…

While the war drags on, don’t dump risk-on investments. As I’ve pointed out in previous articles, stocks tend to perform well during and immediately after major military conflicts. (Case in point: from the start of World War II until its end, the Dow Jones Industrial Average gained 50%.)

The Russia-Ukraine war will inevitably end, and when it does, its denouement is likely to act as a catalyst for the next leg upward in stocks.

War is horrible and shouldn’t be taken lightly. But in the context I’ve just provided, “buy when there’s blood in the streets” isn’t just a metaphor.

In pre-market futures contracts Wednesday, the main indices were trading lower, as investors kept a nervous eye on news from Eastern Europe.

Financial services equities have been climbing higher in tandem with the rise in Treasury yields. Consumer services and consumer discretionary stocks also are ascending. In another positive sign, the CBOE Volatility Index (VIX), aka “fear gauge,” continues to fall and hovers at 23.

My view is that economic growth will remain robust, but growth as well as inflation will level off by the end of 2022. Inflation fires should cool, as the Federal Reserve tightens and supply chain woes get fixed.

That said, supply chain imbalances remain a pressing problem. Research firm FactSet searched for the term “supply chain” in the fourth quarter 2021 conference call transcripts of all S&P 500 companies that conducted calls from December 15 through March 14.

Among these companies, 358 cited the term “supply chain,” which is well above the five-year average of 187 (see chart). 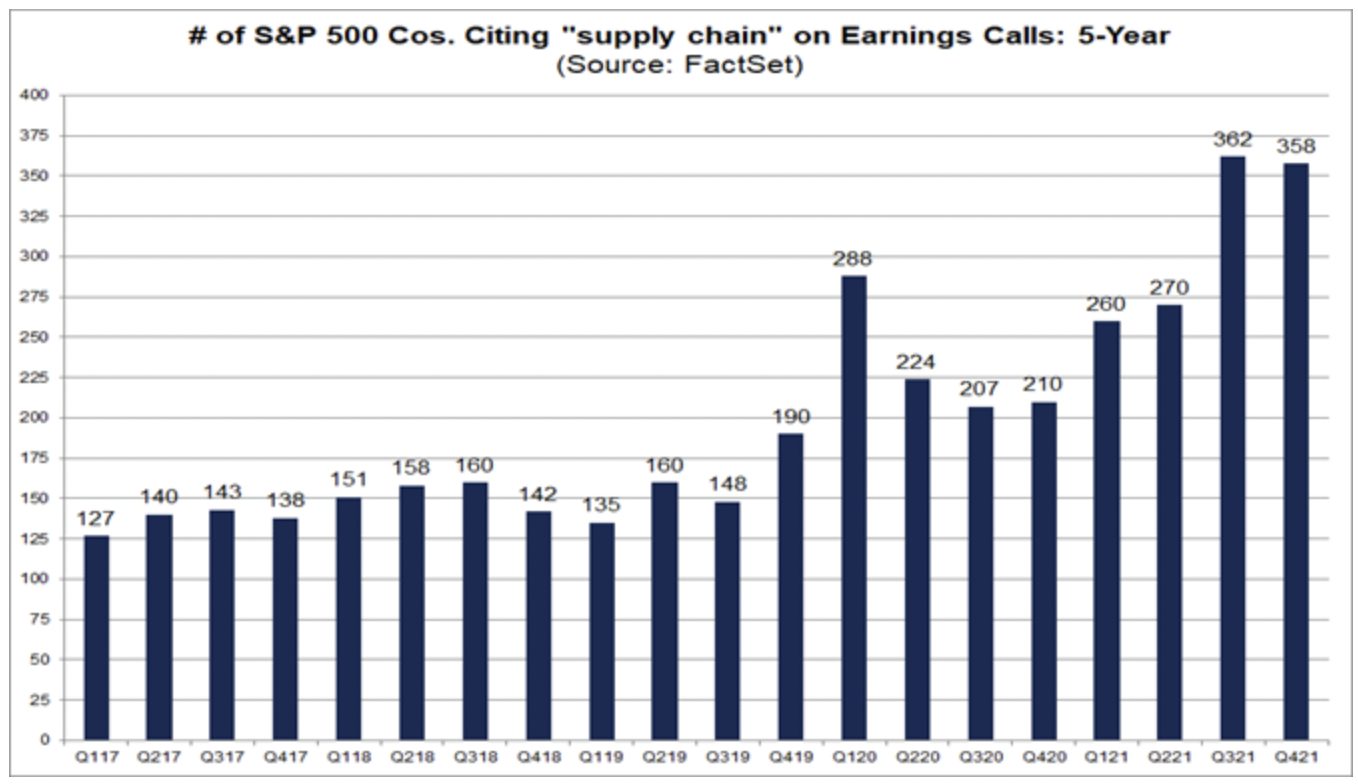 The industrials (65) and information technology (57) sectors accounted for the highest number of companies that cited supply chain.

Accordingly, companies are experiencing a decrease in their net profit margin estimates for the first quarter of 2022.

However, we’re seeing signs that the global supply chain is returning to equilibrium. Container turnaround times are accelerating; supply chains with clear visibility of actual demand are mending the fastest.

The Russia-Ukraine war clouds the investment picture, but it’s increasingly apparent that Russian President Vladimir Putin made a huge mistake by committing himself to total victory in Ukraine.

Through hubris and poor planning, the Russian dictator finds himself in a quagmire. The Kremlin downplays the actual number of casualties, but Putin’s war in Ukraine has racked up about 10,000 Russian military deaths in less than a month. In two decades in Afghanistan, the U.S. suffered 1,910 combat deaths.

Conversely, Ukraine is getting more optimistic, due to widespread international support, the country’s effective resistance, and the Russian military’s demonstrated incompetence. My take: Putin either makes a face-saving compromise or gets deposed by his own oligarchs. And then investors will turn the page.

In the meantime, are you looking for the next big investment opportunity? Corporations are flush with cash and they’re about to unleash a “feeding frenzy” of merger and acquisition activity.

You can profit from the takeover boom, by following the advice of my colleague, Nathan Slaughter, chief investment strategist of Takeover Trader. Gain instant access to his insights, by clicking here now.