Nineteenth century financier Nathan Rothschild is well known for saying that stocks should be bought when there “is blood on the streets.” Less graphically stated, the familiar adage means that bear markets are often buying opportunities.

Of course, with the stock market dropping like a stone on a regular basis, it’s hard to be bullish. So, please don’t misunderstand the purpose of this article.

Still, it pays to be pragmatic. Even as the market gyrates wildly, my mindset is that of an investor looking for stocks of sound companies to own at some point.

Let me explain a bit further. I’ve been doing this since 1987 and I’ve seen plenty of bull and bear markets. And at the end of the day, when the trend reverses, I want to be ready.

As a result, even though I don’t enjoy bear markets, over the years I’ve learned that they can be great periods for finding potential bargains.

Bull markets tend to last longer than bear markets; by some measures up to five times longer. The average bear market lasts 12 months but can last anywhere from seven (with no recession) to 18 months (with recession).

That means that the current bear market, which we will say started in December 2021 based on the top price of the S&P 500 (SPX) before the current decline, may last until anywhere between July 2022 to June 2023 if it sticks to the script. You can grab a bit more detail on bulls and bears here.

Now, no up or down trend is ever the same. And there are always some fine points related to each such as the state of economic activity and corporate earnings. But they do share some general characteristics. For example:

What ties one to the other is what the Federal Reserve says it will do with interest rates over the next few weeks to months. As a result, the current decline in stocks should come as no surprise to any investor since the Fed is in the early stages of an interest hiking cycle. But what most investors should realize is that at some point, the same Fed will again lower interest rates, which means that the odds of another bull market emerging will be well above average.

And that’s why I’m making a shopping list, because unless this time is ridiculously different, the Fed will reverse its current interest rate policy and when that becomes apparent, stocks are likely to begin another bull market.

In the following section, I will show you a stock that’s on my shopping list. Also keep in mind that this is an exercise which is useful in a bear market, but which can also be adapted to bullish trends. But first, here are five criteria which can be useful in choosing companies to include in your shopping list:

Putting it All Together

Coffee chain Starbucks (NSDQ: SBUX), whose situation I recently profiled, fits the bill for this exercise perfectly because it’s a well-known name with a history of earnings and revenue growth which has been down on its luck lately. In fact, as I profiled in my recent article, the company faces significant headwinds due to potential labor issues (unionization and worker availability) as well as supply chain problems.

But that’s why it’s a perfect addition to the shopping list. Now, just to be clear, being included in the shopping list does not guarantee entry into my portfolio. So, let’s go further down our checklist. 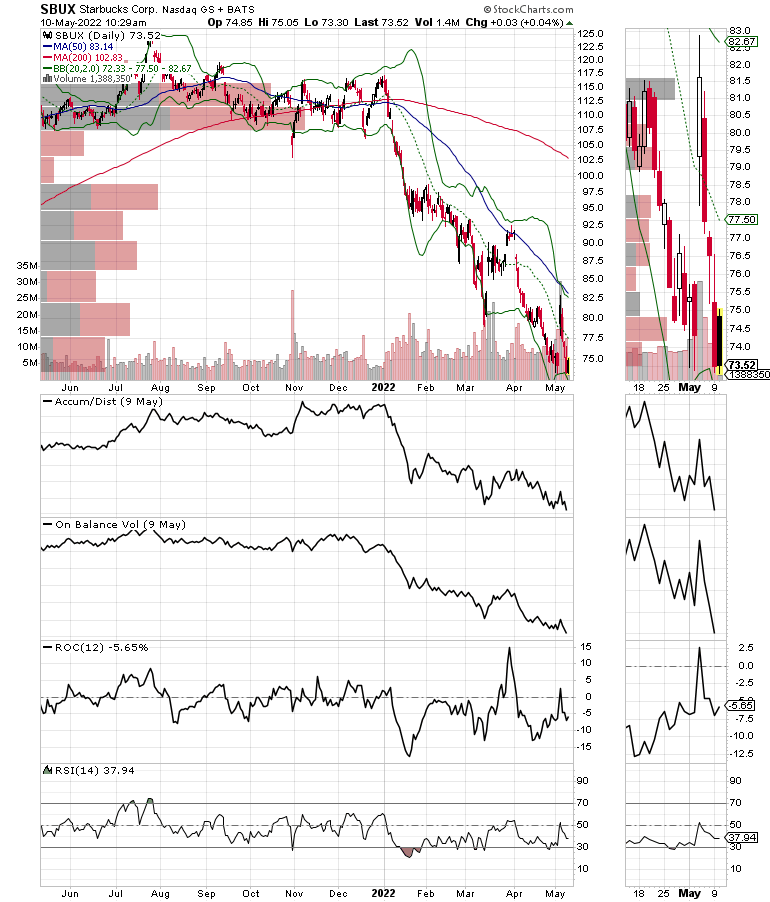 The price chart has two major points to consider. First, the stock seems to have bottomed out, which is definitely a positive. And second, it is acting better than the S&P 500, which has been making new lows of late.

Now, as far as future trends, coffee consumption growth is projected to grow steadily over the next five years under the worst possible conditions. And when you consider that the odds for an economic recovery over that time period are better than average, you can see that its product cycle remains positive as the restrictive environment reverses.

Finally, management holds the key to success. And with the return to the helm of the highly successful former CEO, Howard Schultz, management delivers another bullish reason for adding the stock to the shopping list.

Bear markets can be demoralizing as well as painful to your pocketbook and portfolio. But they also offer opportunities to buy the stocks of solid companies at what can be rock bottom prices.

Coffee giant Starbucks fits the bill of a great company which is worth keeping an eye on. But it’s just one of many stocks on my shopping list at the moment.

The bottom line is that markets will rise and fall but one thing never changes. The key to success in investing is to be prepared for both bull and bear markets well ahead of time.

Editor’s Note: In this volatile and risky market, where can you still find solid growth opportunities? We can sum it up with a single word: takeovers. You might have heard them referred to as buyouts, mergers, or acquisitions. But no matter what you call them, when a takeover is triggered, the profits that spill out have life-changing potential.

In this era of war, inflation and pandemic, corporate consolidation is the name of the game. Even the whisper of a “mega-merger” can hand investors enormous returns. Our colleague Nathan Slaughter, chief investment strategist of Takeover Trader, just pinpointed a potential takeover deal that could dwarf them all.