One More Lap Around the Track with CARZ

Two years ago, I recommended buying shares of the First Trust S-Network Vehicles & Technology ETF (CARZ). At that time, vehicle sales were plummeting after auto showrooms closed due to the coronavirus pandemic.

Wall Street dumped car stocks en masse, pushing CARZ down 24% over the first three months of 2020. The way I saw it, the news could only get better for automakers.

The timing of that advice was nearly perfect. Fourteen months later, CARZ was up 134% as car sales surged once showrooms reopened. So, I suggested selling CARZ to lock in that gain.

The timing of that advice also turned out to be pretty close to perfect, too. CARZ peaked a few months later and then started falling as global supply bottlenecks impeded new car sales.

Now, I’m beginning to think that it may be time to buy CARZ again. Rapidly rising interest rates have made car loans expensive. Once again, Wall Street is abandoning automakers.

To be sure, new car sales have been adversely impacted by supply chain problems and higher interest rates. Total vehicle sales in the United States came in at 13.6 million units in August of this year compared to 17.6 million in August 2019. 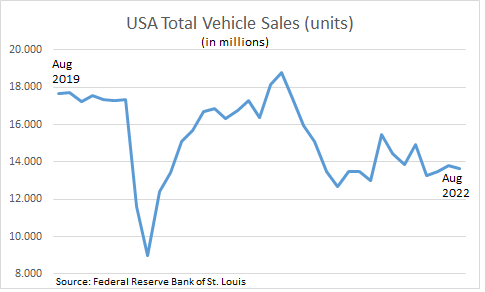 That’s a big drop and indicative of the extent to which consumers are changing their spending habits in response to rising inflation. We are not going to stop buying groceries no matter what the cost, but we will put off a new vehicle purchase when money gets tight.

That is why I believe CARZ could rebound strongly next year. Once inflation stops rising and the Fed eases up on interest rate hikes, new car sales could rebound quickly.

Here is a fun fact about CARZ that may surprise you: Only one of its top ten holdings is an automaker. That company is electric vehicle (EV) manufacturer Tesla (NSDQ: TSLA), which accounts for 4.9% of the fund’s total assets.

There’s a good reason for that. At the start of this year, the fund changed its name and its investment objective. It used to be known as the First Trust NASDAQ Global Auto Index Fund and tracked the entire auto sector.

Now, the fund tracks the S-Network Electric & Future Vehicle Ecosystem Index. Instead of being a proxy for the auto industry, the fund is focused on businesses that are investing heavily in electrified and autonomous driving.

We can thank the soaring success of Tesla for that. While most other automakers hit the skids after the outbreak of the pandemic, TSLA surged ahead.

The fund sponsor hoped the name change and emphasis on EVs would spur investor interest in CARZ. Unfortunately for them, TSLA started falling shortly after CARZ made the switch. As a result, the fund’s total assets are still a relatively puny $50 million.

That may be bad news for the fund sponsor but that is good news for investors. Once Wall Street decides it is safe to get back into CARZ, its small size means its share price could rapidly appreciate.

I don’t know when that will happen, but I have a feeling it could be sooner than most people think. There is a lot of pent-up demand for new cars. And once inflation slows down and the Fed stops raising rates, new car sales could suddenly spike.

Buying shares of CARZ now is one way to participate in the growth of the EV market. Another way is to buy a call option on CARZ if you think it will soon take off. A call option rises in value when the price of the underlying security goes up.

Last week while CARZ was trading near $42, the call option that expires on March 17 at that strike price could be bought for $5. That means CARZ must rise above $47 for this trade to be profitable.

That works out to a 12% gain over the next five months. If the overall stock market is still in the doldrums then it is unlikely that this trade will be a winner.

But if the Consumer Price Index (CPI) report for September comes in better than expected this week, that may be all it takes for Wall Street to get back in the driver’s seat. CARZ has been spinning its wheels for the past nine months, and it may be time for it to hit the gas.

Editor’s Note: Electric and autonomous vehicles are only part of a wave of technological innovation that’s poised to take off. When we’ve put inflation and the pandemic behind us, certain companies will explode on the upside. Our experts have come up with eight shocking “next wave” predictions for the future. Click here for details.