A King-Sized Wager on Bed Bath & Beyond

Over the past three years, few retail stocks have been more volatile than Bed Bath & Beyond (NSDQ: BBBY). Over that span, BBBY has gone through several extreme up/down share price cycles in response to changing sentiment regarding its chances for survival.

In October 2019, I recommended a call option trade while BBBY was trading near $12 (a call option increases in value when the price of the underlying security goes up). Three months later, that position could be closed out for a 100% gain after the stock rose above $17.

In November 2021, I suggested a put option trade while BBBY was trading near $15 (a put option increases in value when the price of the underlying security goes down). That option has not yet expired but could be closed out today for a gain of more than 100%.

As I noted then, “If it were an electric vehicle manufacturer, Bed Bath & Beyond wouldn’t have to produce any profits at all. But it sells household merchandise that can just as easily be bought online, so it has a very serious problem.”

The magnitude of that problem became apparent this week when the company extended its offer to exchange old debt for new debt. Despite doubling the interest rate and shortening the maturity by several years, that deal is being met with deafening silence on Wall Street.

That’s because the new debt is less secure than the old debt. In effect, the company is asking its lenders to accept a greater risk of default in exchange for a higher interest payment.

That’s a great offer if Bed Bath & Beyond can stave off bankruptcy but is a terrible deal if it cannot avoid that fate. As Mark Twain is credited as saying, “It is not the return on my investment that I am concerned about; it’s the return of my investment.”

And right now, just about everyone on Wall Street is convinced that Bed Bath & Beyond will not be able return the money that it owes its lenders. Short interest (as a percentage of the shares actively trading) in BBBY is above 90%.

That means a lot of professional traders are betting that the stock will soon be worth nothing. During the past month, BBY has fallen below $4 as portfolio managers engage in year-end tax-loss harvesting. 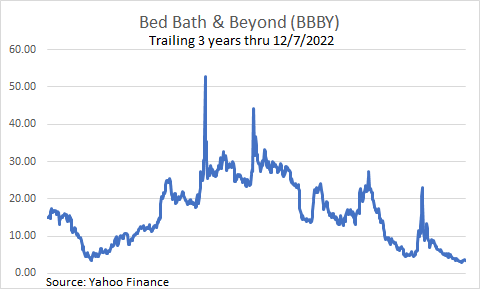 There is little reason for optimism this time around for Bed Bath & Beyond. Its attempts to reinvent itself as an online merchant came up short. Now, it is relying on its old standby of deeply discounting the merchandise in its stores to remain afloat.

In short, the company appears to be buying time to devise a new strategy to avoid bankruptcy. But unless the company records unprecedented holiday sales this month, it may be too late.

This isn’t the first time that Bed Bath & Beyond has been on the brink of disaster. Two years ago, it appeared to be going down the tubes until meme stock traders piled into BBBY to induce a short squeeze.

That strategy was successful and temporarily pushed BBBY above $50. As a result, the company was able to restructure its balance sheet while it searched for a new identify.

I don’t normally recommend “Hail Mary” trades since they have a high risk of failure. But in this case the upside potential is too compelling to ignore.

Last week while BBBY was trading at $3.30, the call option that expires on January 20 at the $3 strike price could be bought for $1. For this trade to be profitable, BBBY must rise above $4 within the next five weeks.

Read This Story: A Money-Making Guru Reveals His Secrets

The best-case scenario is another ambush by the meme stock traders. With a market capitalization of less than $400 million, it wouldn’t take a lot of money to induce a short squeeze in BBBY.

If that happens then this trade could pay off big. If the stock runs up to $15, where it was trading less than four months ago, the return on this investment would exceed 1000%.

The worst-case scenario is that the company folds up its tent and declares bankruptcy. In that case, this option would expire with no value.

I have no idea which way BBBY will turn this time. But I’ve made enough money off of my previous trades on it that I’m willing to risk some of it again.

Editor’s Note: In the above article, Jim Pearce imparted invaluable investing advice. However, we’ve only scratched the surface of the expertise on our team.

Jim Fink has devised a proprietary trading method that has the power to hand you $1,463 every Thursday. Just like an extra paycheck!